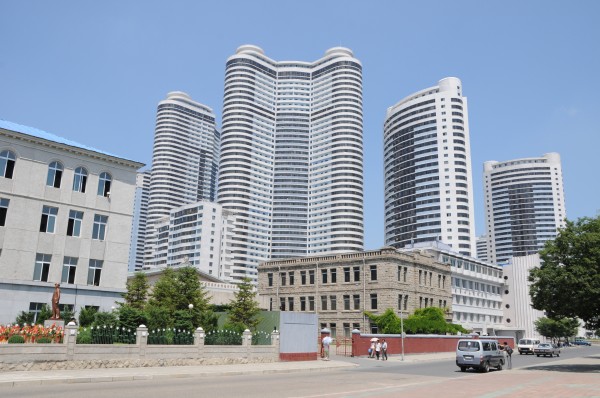 Public housing in Pyongyang. How many American poor would be happy to live like that?

Prefatory note by the editor:

We are happy to be able to present the work of our new special correspondent Andre Vltchek, a man who has traveled the world seeking the stories, the facts, and the images that people everywhere need to form reliable opinions about reality. Especially in matters concerning war and peace, the former the greatest crime that leaders and politicians can commit, the latter the greatest good that humanity can aspire to. But it must be a peace grounded in justice. For only justice guarantees a lasting peace.

PLEASE CLICK ON ANY IMAGE TO DISPLAY IT TO MAXIMUM EFFECT

The image of North Korea (formally the Democratic People’s Republic of Korea) has been maliciously distorted by the West for generations, a deformation that began even before WW II had ended, founded in the relentless and all-consuming anticommunism that fuels policy and mass communications in all capitalist nations, and particularly in the United States.  The upshot of this propaganda war is that North Korea stands today as one of the worst understood and most demonized nations on earth, and like any other nation not submitting to the American empire’s commands, a pariah subject to devastating attacks at the whim and convenience of the cabals in Washington.

If North Korea, or Cuba, or any other nations trotted out by the American media to “demonstrate” that socialism “doesn’t work,” is not swimming in the consumer cornucopia that appears to characterize capitalist societies, it is worth remembering that this is not a “flaw” inherent in socialism or communism, but in largely external circumstances like devastating wars and economic embargoes imposed by the West on generally weaker nations pursuing an independent course, and these societies’ own decision, perfectly understandable when threatened by a colossal enemy, that self-preservation matters more than the ability to fill the shelves with 17 brands of designer jeans.

Yes, North Korea is a country emerging from decades of brutal isolation imposed by the West, and the constant threat of invasion and savage bombing.  This has logically imprinted and deformed the nation’s psyche with a hefty dose of suspicion about the West’s motives, some would say justifiable paranoia, and made relations extremely complex.

Yet understanding North Korea is not that difficult. All that is needed is a modicum of empathetic imagination, decencyl, and compassion leavened with a bit of solid historical knowledge, qualities unfortunately sorely lacking in US culture.

A simple extrapolation is useful. If America, with just one major tragedy involving under 3,000 people has turned itself into a paranoid civilization rapidly devolving into a police state,  can anyone imagine what kind of country we would inhabit today if on 9/11 instead of 2800 people more than 50 million Americans had been wiped out?  You read that right: 50 million people. It’s a figure of such horrendous magnitude as to be incomprehensible to Western publics, especially the highly insulated and propagandized Americans, but the testimony is irrefutable.

North Korea lost close to thirty percent of its population as a result of US-led bombings in the 1950s. US military sources confirm that 20 percent of North Korea’s  (1950s) population was killed off over a three-year period of intensive bombings.

As quoted by Michel Chossudovsky, the head of the Center for Research on Globalization, who cites the US Air Force’s most outspoken and aggressive general, Curtis LeMay:
“After destroying North Korea’s 78 cities and thousands of her villages, and killing countless numbers of her civilians, [General] LeMay remarked, “[In just] over a period of three years or so we killed off – what – twenty percent of the population.”  [See also “An Inconvenient Truth: The Genocidal Toll Inflicted on Koreans by The United States.“]

Facing a debacle in Iraq, the US turns for help to Iran