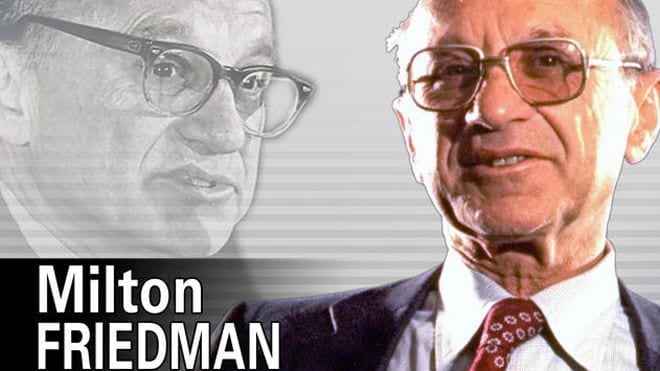 Like all opportunists and frauds, Friedman knew a good opportunity to attain power and fame when he saw one. His role as an apostle of “pure capitalism” quickly made him a media darling, despite his being an admirer of brutal fascists, an inconvenient fact never mentioned on the sycophant media.

Milton Friedman (1912-2006) labeled it the “Miracle of Chile,” as his “Chicago Boys,” a considerable group of Chilean economists who studied at the University of Chicago, established his neoliberal principles under the tutelage of General Augusto Pinochet from 1974-90.

The infamous general overthrew Salvador Allende’s socialist Chilean government in a coup d’état in 1973 with help from classified CIA support as well as cloak-and-dagger cheerleading from distant corners of the world, Milton Friedman in Chicago and Henry Kissinger in Washington, D.C.

Thereafter, Chilean economic policy “deregulated and privatized,” including the breakdown of state-controlled pension systems, state industries, and state banks (sound familiar, Southern Europe?) And, of course, taxes were reduced. Forthwith, Chile unfettered itself from state control and turned the economy loose into the lair of “the freedom of the markets.”

Thereafter, Milton Friedman never stopped grinning, and Henry Kissinger smiled for the first time ever, he once remarked: “I don’t see why we need to stand by and watch a country go communist due to the irresponsibility of its people. The issues are much too important for the Chilean voters to be left to decide for themselves.” (Source: Timothy David Clark, Dept. of Political Science, Putting the Horse Before the Cart: Neoliberalism and Post-Neoliberalism in Chile, York University, June 15, 2012.)

As for the gory details of CIA involvement in the Chilean coup d’état of 1973, Costa-Gavras’ film “Missing” (Universal Pictures, 1982) starring Jack Lemmon and Sissy Spacek exposes the surreptitious U.S. involvement via CIA operatives, supportive of Pinochet’s cold-bloodied massacre of students and other innocent bystanders. Not surprisingly, the film was removed from the U.S. market following a lawsuit against the director and Universal Pictures by former ambassador Nathaniel Davis for defamation of character. When Davis lost his lawsuit, the film was re-released by Universal in 2006.

The face of neoliberalism in Chile today is disheartened, reflecting deep losses for the wealthy class as the people of the country reject Milton Friedman’s neoliberal policies, including clever tax evasion techniques by the business class. Could this be the start of a worldwide movement against neoliberalism? 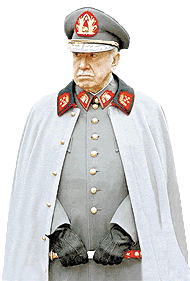 After all, Chile is the country that neoliberal advocates crowned their “newborn” in the battle against big government, “get government off our backs,” according to Milton Friedman (and, Reagan picked up on the adage.) But, au contraire, according to the film “Missing,” fascism took control over Chile. Is it possible that Friedman and Kissinger secretly cherished a fascist empire, where control would be complete, disguised as “the land of individual economic freedom?” Whatever their motives, that’s what they got, and they never hesitated to revere Chile’s remarkable economic achievements, fascism and all, which is powerfully expressed in the film “Missing,” from end to end the heavy hand of fascism is ever-present.

Today is a new day as the people of Chile abandon decades of rotting neoliberal policies. They’ve had enough of Milton Freidman. The people have decided that the “state” is a beneficial partner for achievement of life’s dreams. The “state” is not the menacing force of evil preached by Margaret Thatcher and Ronald Reagan.

The people of Chile are embracing an anti-neoliberalistic nation/state for the first time in over four decades. Will the world follow in their footsteps similar to the world adopting the principles of the “Miracle of Chile” these past four decades?

As for the new way forward, it’s all about student debt. Yes, student debt was the catalyst behind Chile’s repudiation of neoliberalism. In 2011 students in Chile made headlines by launching nationwide strikes over high tuition costs that drove their families into debt (sound familiar?) The strike lasted for eight months.

Over time, the student marches gained recognition by other like-minded organizations like trade unions and protesters of environmental degradation. According to Tasha Fairfield, an assistant professor for the London School of Economics’ Department of International Development, the strikes were pivotal: “The student movement played a critical role in creating political space.” According to Fairfield, it “dramatically changed the political context in Chile and helped to place the issues of Chile’s extreme inequalities centrally on the national agenda,” (Sebastian Rosemont, Chilean Activists Change the Rules of the Game, Foreign Policy In Focus, Dec. 2, 2014).

Subsequently, the national election of 2013 swept the left wing into power with a huge wave of public support, gaining strong majorities in both houses of the National Congress as well as electing (again) Michelle Bachelet president. The big leftward sweep came as over two thirds of the population grew to support student demands for free university tuition.

Ever since the 2013 election, neoliberal policies have crumbled like a decrepit equestrian statue of Pinochet, who carried the stigma of brutal criminality to, and beyond, the grave.

In stark contrast to 40 years ago, today, when students, armed with only stones clashed with police equipped with full regalia of riot gear, tear gas, and armored vehicles, the harsh police activity drew heavy international criticism. That, combined with more than two-thirds of the population in support of the student movement, led to a new politics, Nueva Mayoria (New Majority), a center-left coalition made up of Bachelet’s Socialist Party, the Christian Democratic Party, and the Party for Democracy.

Whereupon, Nueva Mayoria, turning up its nose to neoliberalism, raised corporate taxes from 20 percent to 25 percent and closed tax loopholes for companies and wealthy business owners. Those changes added $8.3 billion annually to government coffers, thus, serving as a source of funds to provide free education to all Chileans by 2020, as well as improved health care, and including a roll back of the for-profit schools that emerged under Pinochet’s dictatorship, which is another neoliberal fascination, witness the U.S. for-profit schools listed on the New York Stock Exchange…honestly, what’s with that?

In order to achieve success, the new Chilean politics astutely employed a key tactical move by applying the corporate tax hikes to only the largest corporations. As a result, nearly 95% of businesses are not be affected by higher taxation. This, in fact, served to secure a broad base of support for the new politics by having those who can afford to pay… Pay.

Along those same lines, the new government removed a tax dodge employed by large business owners that allowed them to mostly escape taxes on $270 billion of profits (similar to the U.S. 15% “carried interest” for private equity entities, e.g., Mitt Romney’s 15% tax rate).

Thus, it’s little wonder that public backlash is challenging neoliberalism, especially considering the conditions throughout the Pinochet regime, as described in the meticulously structured documentary film, “The Pinochet Case,” (Icarus Films, 2002), which opens with scenes of ordinary Chileans scouring the desert for the remains of family members who were tortured and killed decades previous.

Chile, “The Babe of Neoliberalism,” came to life as an experiment for the “Chicago School” of economic thought.  It worked. Today neoliberal theory rules the world, laissez-faire capitalism as practiced from China to the United States, privatization, open markets, slash government, and deregulation, in short, “whatever works best for profits works best for society.” But, does it?

Forty years of neoliberal thought and practice has changed the world’s socio-economic landscape, but it only really, truly works for the same class of people today as it did 800 years ago for the nobility of the Middle Ages.

Robert Hunziker lives in Los Angeles and can be reached at roberthunziker@icloud.com.

War by Media and the Triumph of Propaganda