Home AMERICAN PARTY DUOPOLY Is Kshama Sawant Really Caving in to the Democrats?

Is Kshama Sawant Really Caving in to the Democrats?

What’s Going on in Seattle? 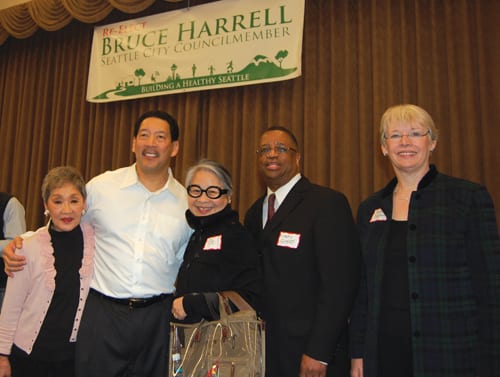 .
DAVID McDONALD
A good fighter, a friend and a longtime activist, MB re-posted an article on FaceBook that attacks Kshama Sawant, Seattle’s socialist City Councilmember,for attending a fund-raiser for Larry Gossett, a member of the King County Council and a Democrat. The underlying issues are serious enough to deserve a thorough response.

Larry Gossett has a more interesting history than many might know. He was a leader of the Black Panther Party in Seattle in the 60’s, eventually settling in as Director of the Central Area Motivation Project until his election, as part of the Rainbow Coalition, to the King County Council. Until this year, he was the Chairperson of the Martin Luther King Celebration Committee, a group that has organized, in a very non-sectarian fashion, a march on MLK Day for the last 33 years. I know, having worked on this committee for about 9 of these years. This committee is responsible, among other things, for the re-naming of King County in honor of Martin Luther King, Jr.

Gossett was one of the few Black people with any power in Seattle who treated the Socialist Workers Party decently back in the day, renting his facility to us and signing on for reasonable things we brought to him from time to time.

I think it is fair to say that Gossett is a non-sectarian Democrat. One of few. And he is the best known and most widely respected Black political activist and civil rights leader in Seattle.

What is vital to this discussion, and what is not mentioned by any of those whining about Kshama’s attending his fundraiser, is that Gossett has endorsed her re-election campaign. That’s right, you read it correctly: Larry Gossett has endorsed Kshama Sawant’s candidacy for City Council Position #3.

This comes at a time when the Democrats have fielded not one, not two, but THREE candidates against Sawant: Rod Hearne, Morgan Beach, and Pamela Banks. These are all well-known Democratic Party types who have had important and notable jobs in Seattle. None of them is a vanity candidate. Rod Hearne is a prominent Gay Rights Activist, Morgan Beach is a well-known bourgeois feminist and Pamela Banks in the current President of the Urban League.

The strategy of all three candidates is an identity politics – based approach to carve off a portion of Sawant’s supporters: gays, women, and Black people. So far, fortunately, none of these candidacies have taken off. Pamela Banks, the most recent to declare candidacy, is unable to distinguish herself from Sawant on any substantive political issue — because Sawant has been out in front of all the most fundamental issues of livability in Seattle: minimum wage, affordable housing, gay bashing, and more. Banks defended her candidacy by saying she is more about the telephone than the microphone, and that is likely true enough. Banks intends to roam the corridors of power while Sawant intends to stay in the streets, employing a movement-building strategy as she has done every day of her tenure on the Seattle City Council.

This is one of the reasons she is the best known of all the candidates for City Council — her readiness to get in the face of power, even as she combines that with her own power on the Council. This is totally unnerving to the ruling class in Seattle and no doubt a factor in the large number of retiring City Council members this year. It’s just no fun anymore now that Kshama is there to call them out and do what’s right, like when she refused to attend (and denounced as a waste of money) a weekend getaway lovefest at a nearby resort with the local bourgeois, and instead stayed in Seattle to get community input on improving the upcoming city budget.

Or when she roused fellow City Councilmember and octogenarian Jean Godden from her slumbers and got her to sign onto an amendment to the City Council’s budget to immediately give all Seattle City Employees a minimum wage of $15/hr. This meant that since Sawant’s amendment had three Council members co-signing, it could only be removed from the budget by a majority vote of the whole council and they lacked the stomach to go on record opposing a measly $15/hr for city gardeners and so forth. That was a cool $1million plus for the workers of Seattle and a great example of how to actually stalk the corridors of power.

So, Larry Gossett, a sitting King County Councilmember has broken ranks with the party hierarchy and endorsed Sawant. Not only is this treason, it gives all sorts of other Democrats license to do the same

Pramila Jayapal, a newly-elected Washington State Senator from Seattle, has also endorsed Sawant. While Gossett is near the end of his career, Jayapal won election just last November as a Democrat and will probably be there for a while.

Jayapal is also a progressive with a non-sectarian history. She was probably more responsible than anyone for the huge size of the February 2003 antiwar march of 70,000 people, the largest non-sports gathering in the history of Seattle. How did that happen? When the usual suspects, the liberal Democrats, the closeted CPers, the liberal types from the Church Council of Greater Seattle got together with Hate Free Zone, led by Pramila, to respond to the threat of war with Iraq, she insisted that the Not in Our Name people be included in the initial core organizers of the march. That opened the door for the inclusion of ANSWER a little later.

This was due to the fact that Not in Our Name had been very active in the at-the-time very hot issue of immigrant rights and had done some good mobilizing work, despite it being a front for the despised Revolutionary Communist Party. Not wishing to offend or maybe lose Hate Free Zone, the rest of them gritted their teeth and allowed NION into the coalition, which meant that all the fundamental peace forces in the city were in the same coalition for once. As head of fundraising for that event, I got a seat at the table so I am relating this from personal experience. Pramila’s non-sectarian approach surfaced again this year when she endorsed Sawant – she bucked the Democratic Party’s strategy, and supported what was good for the community, which is Sawant’s re-election.

So, my dear friend M, this is why you are so dead wrong on this. Kshama is in the fight of her life, and it is a fight that everyone in America, especially those of YOUR and MY stripe ought to support, with time, with effort and with money. Kshama went to Larry Gossett’s campaign kickoff rally. Big deal. It was AT MOST a minor courtesy to a person who defied his party’s general wisdom and endorsed her. Now, true enough, Larry Gossett is not about to be defeated because of this endorsement. But it counts. Objectively, Gossett’s and Jayapal’s endorsement of Kshama Sawant is a split in the Democratic Party’s campaign to bury Sawant. So far from denouncing her, we should congratulate Kshama for her good sense in reaching out to Democrats who can be carved away from the Die Trotskyite Bitch campaign of the Democratic Party, whose admitted spiritual leader Seattle Mayor Ed Murray has let it be known that Sawant’s defeat is his No 1 priority in the City Council elections.

And let it also be said that Sawant has not backed off to the slightest degree in her opposition to Gossett’s main political focus of late, to wit, his sponsoring of a new Juvenile Detention Center (read: jail) for Seattle. So far from adapting to Larry Gossett, Sawant went to the MLK Celebration Committee IN PERSON (she was the only elected politician to do so) and asked to speak at the MLK rally, at which she delivered a spirited and wonderful speech denouncing the idea of a new jail, and counterpoised instead spending the vast funds about to be squandered on concrete for actual programs within the jail to help incarcerated youth. So much for bending to the politics of the Democratic Party.

Changing the Meaning and the Practice of Policing in the US