Rare images of the deposed Shah of Iran’s extravagance (Video)

Decadence and Downfall: The Shah of Iran's Ultimate Party

[dropcap]T[/dropcap]he 2,500 year celebration of the Persian Empire (Persian: جشن‌های ۲۵۰۰ سالهٔ شاهنشاهی ایران‎), officially known as The 2,500th year of Foundation of Imperial State of Iran (Persian: دوهزار و پانصدمین سال بنیانگذاری شاهنشاهی ایران‎), consisted of an elaborate set of festivities that took place on 12–16 October 1971 on the occasion of the 2,500th anniversary of the founding of the Imperial State of Iran and the Achaemenid Empire by Cyrus the Great.[1][2] The intent of the celebration was to demonstrate Iran's old civilization and history and to showcase its contemporary advancements under Mohammad Reza Pahlavi, the last Shah of Iran.[3]

However, the striking extravagance of the celebrations led later historians to believe that the celebrations were the start of the chain of events that ended with the Iranian Revolution and eventual replacement of 2,500 years of continuous Persian monarchy with an Islamic Republic under the Grand Ayatollah Ruhollah Khomeini, the leader of the revolution, supported by a wide range of people including various Islamist and leftist organizations[4] and student movements.[5][6]

2,500 year celebration of the Persian Empire in Persepolis, October 1971.

The planning for the party took a year, according to the 2016 BBC Storyville documentary Decadence and Downfall: The Shah of Iran's Ultimate Party, which interviewed the people tasked by the Shah to organize the party. The Cyrus Cylinderserved in the official logo as the symbol for the event. With the decision to hold the main event at the ancient city Persepolisnear Shiraz, the local infrastructure had to be improved including the Shiraz International Airport and a highway to Persepolis. While the press and supporting staff would be housed in Shiraz, the main festivities were planned for Persepolis that for this occasion would be the site of an elaborate tent city. The area around Persepolis was cleared of snakes and other vermin.[7] Trees and flowers were planted and populated with 50,000 song birds imported from Europe.[3] Other events were scheduled for Pasargadae, the site of the Tomb of Cyrus, as well as Tehran. 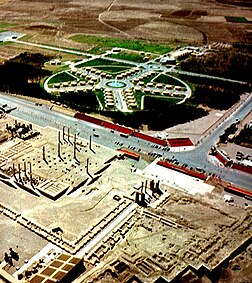 Tent City of Persepolis in 1971

The Tent City (also Golden City) was planned by the Parisian interior-design firm of Maison Jansen on 160 acres (0.65 km2) and took its inspiration from the meeting between Francis I of France and Henry VIII of England at the Field of the Cloth of Gold in 1520.[7] Fifty 'tents' (actually prefabricated luxury apartments with traditional Persian tent-cloth surrounds) were arranged in a star pattern around a central fountain, and vast numbers of trees were planted around them in the desert, recreating something of how the ancient Persepolis would have looked. Each tent had direct telephone and telex connections back to its respective country and the whole celebration was televised to the world by way of a satellite connection from the site.

The large Tent of Honor was designed for the reception of the dignitaries. The Banqueting Hall was the largest structure and measured 68 by 24 meters. The tent site was surrounded by gardens of trees and other plants flown in from France and adjacent to the ruins of Persepolis. Catering services were provided by Maxim's de Paris, which closed its restaurant in Paris for almost two weeks to provide for the glittering celebrations. Legendary hotelier Max Blouet came out of retirement to supervise the banquet. Lanvin designed the uniforms of the Imperial Household. 250 red Mercedes-Benz limousines were used to chauffeur guests from the airport and back. Dinnerware was created by Limoges and linen by Porthault.

FOOTBALL WAS CHINA’S NATIONAL SPORT FOR MILLENNIA. WHY ARE THEY SO BAD NOW?

When TV spies get closer to reality—or do they?

What an extraordinary film about Iran and the Shah. It brings so many memories back to me from the time we lived there. The country is well beyond understanding for Westerners who cannot conceive of other ways of seeing human life and a world beyond their own. This movie is not only enlightening but also a record of the harsh treatment by the West and of the extraordinary sophistication of a basically poor society with enormous resources. Thank you !