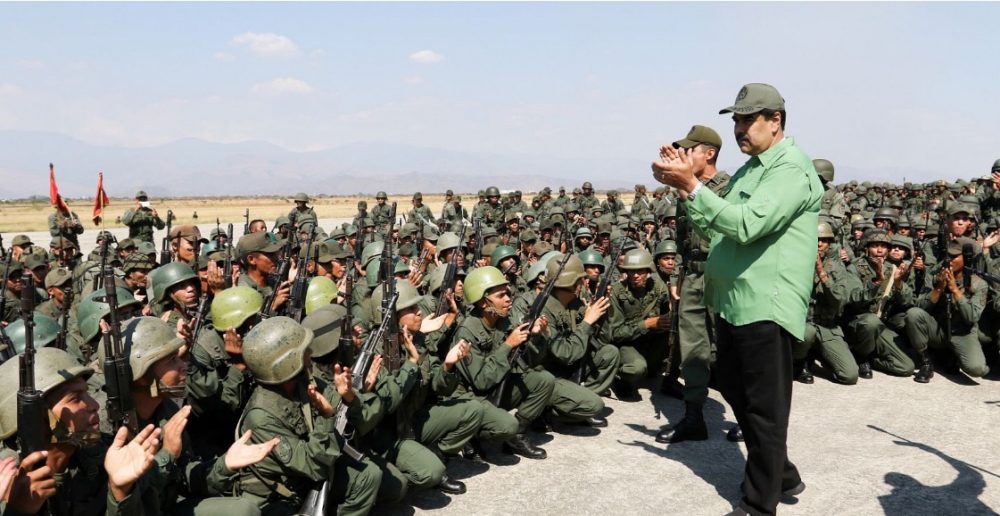 Maduro with his troops. With Venezuela strategically sealed off, how long would such an army resist a multiprong attack by the empire?

By Andrey Sushentsov| The Valdai Club

An emergency situation is unfolding in Venezuela with the intensity of developments increasing in a wave-like manner. At the moment, political stability is maintained by the Venezuelan armed forces, whose loyalty is generously paid for by the Maduro government. The key reason for the current unrest is the acute shortage of essential goods and the constant uncertainty of the socio-economic situation for the majority of citizens. The US employs the difficult moment for the Maduro government and increases pressure by supporting the opposition and inciting a coup. However, despite this there is no reason to assert that a US armed invasion is likely.

First, it is the flow of money into the country. Its key source is the revenue from oil exports. The Venezuelan government is heavily dependent on the state-owned PDVSA company, while its production and exports are constantly decreasing. Last week the US imposed sanctions against the company, and despite all the exceptions for its American partners, they are extremely painful.

The second key condition is the army support. For the time being, the armed forces will remain loyal to the government and suppress protest activities in their own ranks and among the members of the National Guard. Over the past year, there were at least a dozen of such mutinies. Maduro buys support of the army by appointing key Venezuelan military leaders to top positions in the state-run oil company. But in the long run, such system is extremely unstable.

The third condition for stability is the availability of essential goods. A critical situation with them in the country is due to the general imbalances in the economy and obstruction of supplies by Colombia, which supports the American pressure policy.

The fourth condition for stability is the absence of an external military intervention threat. Despite belligerent rhetoric and obvious preparations for a regime change by supporting the parliamentary opposition in Venezuela, the United States is unlikely to go for a direct military intervention. Politically, it would be extremely unwise, since it would cause mass resistance and a national liberation war in Venezuela. Given the US record of invasions in Latin American countries, this would cause a wave of anti-Americanism throughout the continent. The main reason is that a military operation would not allow the US to achieve its political goal quickly; a military campaign would be too viscous, long-lasting and, ultimately, inefficient. Other countries that verbally call for the use of force – Colombia and Brazil – are unlikely to go alone to a military aggravation of the situation.

The fifth condition for stability is that Maduro retains leadership within the Chavista movement of Venezuela. At the moment, Maduro is the only leader of his party and is not under pressure from a possible competitor. He holds the initiative in the party discussions and unites the party apparatus around himself.

The sixth condition is the dynamics of the student movement. In Latin America, regimes were often changed by massive student unrest, growing into insurrection. For Venezuela this is also a familiar path. According to the past two years’ data, students are among the most active protest groups in Venezuela, the army and National Guard often detained student leaders.

Finally, the seventh condition for stability is China’s policy toward Venezuela. China has invested about $50 billion in the country’s economy and is carrying long-term plans to import Venezuelan oil. Venezuelan oil reserves are believed to be the largest in the world, and in order to use these resources, China is considering the possibility of building a canal in Nicaragua. A lot will depend on Beijing’s behavior in this situation. The most revealing steps will be toward PDVSA, which is now under US sanctions.

We should remember that the situation is extremely shaky – there is an emergency situation and the projections are limited to a short-term period. However, in this heightened uncertainty there is a number of constants – the Venezuelan parliament speaker rotates on an annual basis; the current speaker Juan Guaidó should resign at the end of the year. New parliamentary elections in the country should be held before the end of 2020.

Although the government in Caracas maintains control over the situation and remains viable in the short term, the consolidation of this trend requires elimination of shortages of essential goods by external economic assistance. Venezuela’s key vulnerability is the position of PDVSA, its oil major. Due to the fact that the Americans transferred control over the accounts of this company to the opposition, Guaidó can use these resources to buy the loyalty of a part of the armed forces or the National Guard of Venezuela. Only in this case will the real dual power begin to take shape in the country.

In general, the Maduro government’s future depends on the loyalty of the army and on the ability to quickly solve the problem of shortages of essential goods. At the same time, Maduro himself must keep the initiative in confrontation with the parliament and retain leadership among the party members – Chavistas. There is a reason to believe that Russia and China will assist the legitimate government of Venezuela – this assistance is likely to be symbolic, economic, and consulting.

ABOUT THE AUTHOR
The author is a Russian geopolitical analyst.