The nationalist “socialism” of Bernie Sanders

[dropcap]I[/dropcap]n the initial stages of the 2020 campaign, Vermont Senator Bernie Sanders has made a significant shift to the right. He has demonstratively embraced economic nationalism and sought to make it a keystone of his campaign for the Democratic presidential nomination. This is deeply reactionary and demonstrates the unbridgeable gulf between Sanders, who calls himself a “democratic socialist,” and genuine socialism, which is unshakably committed to the international unity of the working class. 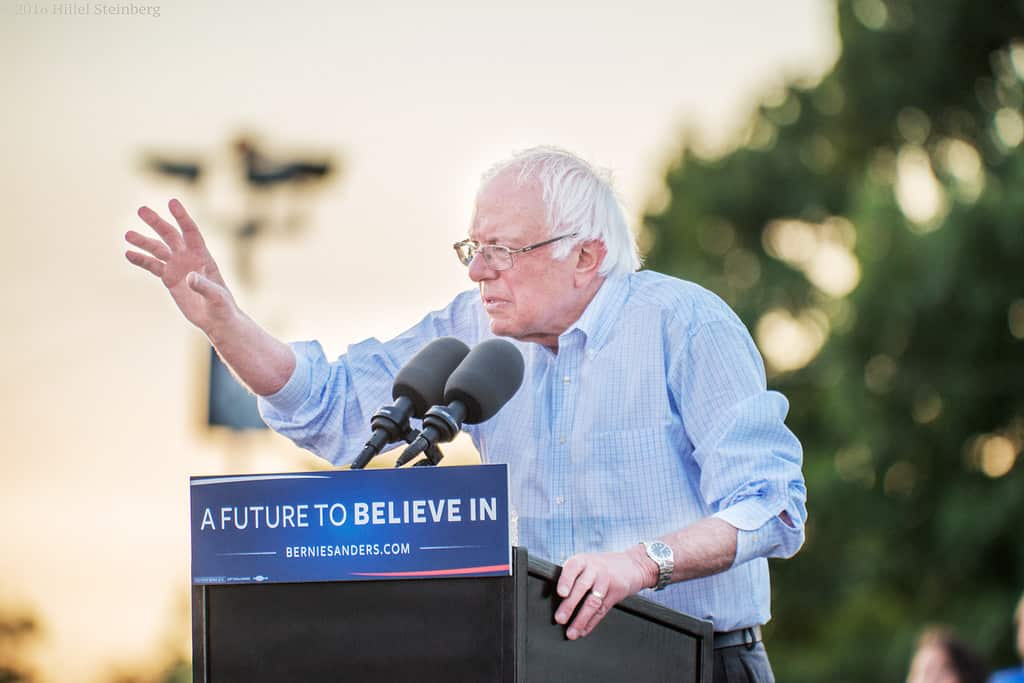 Karl Marx, the founder of scientific socialism, proclaimed long ago that the working man has no country. But Bernie Sanders takes the opposite stance. He defends the national interests of US imperialism. His country is that of Wall Street, the Pentagon, the CIA and corporate America.

Last week, Sanders attacked former Vice President Joe Biden, one of his principal opponents for the Democratic presidential nomination, denouncing his suggestion that the United States need not be unduly concerned about the prospect of Chinese companies defeating American companies in the world market. “They’re not bad folks,” Biden said. “But guess what, they’re not competition for us.”

Biden was espousing a slightly different version of the reactionary chauvinism that is a hallmark of American capitalist politics. “Don’t worry, we can beat them easily,” was his boast.

Karl Marx, the founder of scientific socialism, proclaimed long ago that the working man has no country. But Bernie Sanders takes the opposite stance. He defends the national interests of US imperialism. His country is that of Wall Street, the Pentagon, the CIA and corporate America.

Sanders objected, saying in a tweet, “Since the China trade deal [in 2000] I voted against, America has lost over 3 million manufacturing jobs. It’s wrong to pretend that China isn’t one of our major economic competitors. When we are in the White House we will win that competition by fixing our trade policies.”

Sanders thus postures as the defender of American workers in a conflict with Chinese workers over manufacturing jobs. The so-called “socialist” has gone so far as to criticize President Trump at an April 13 rally for supposedly taking too soft a line with China in the current trade talks. “For once in your life,” Sanders said, “keep your campaign promises… go back to the drawing board.”

On April 29, Sanders released his trade platform, calling for renegotiation of all US trade agreements and demanding that China be labeled a currency manipulator, something that successive US administrations have threatened, including Trump’s, but always pulled back from carrying out, in large measure because China is the largest holder of US government bonds.

After releasing his trade plan, Sanders said: “We need a president who will actually fight for American workers, keep their promises, and stand up to the giant corporations who close down plants to send jobs overseas.” These words could have been said by Trump himself.

Sanders has always been an economic nationalist, opposing NAFTA and other trade agreements from the standpoint of the trade union bureaucracy, which seeks to convince American workers that Mexican workers are their enemies, “stealing jobs” from them.

In this way, capitalist politicians and union executives seek to split the working class along national lines, pitting workers in the United States against those in Canada and Mexico, as well as in China, Japan and Europe, and inciting a never-ending race to the bottom, as workers are browbeaten into accepting cuts in wages and benefits and ever more onerous working conditions with the claim that this is the only way to keep the employers from moving overseas.

The only alternative to this is the struggle to unite the working class on an international basis, in a common struggle against the multinational corporations, the various capitalist states and global capitalism as a whole. In that struggle, the Chinese proletariat, the largest in the world, is objectively a great ally of the American working class, engaged in bitter struggles against some of the same transnational corporate giants that exploit American workers.

In the 2020 campaign, Sanders’ espousal of economic nationalism is part of a systematic effort on his part to demonstrate to the ruling class that he is a reliable instrument for its imperialist and neocolonialist foreign policy, helping to promote an anti-China fever and lining up (with minor reservations) behind Trump’s regime-change operation in Venezuela.

A recent profile in the New Yorker documented Sanders’ recruitment of a group of foreign policy advisers drawn from the world of imperialist think tanks, for the most part individuals chastened by the failure of the wars in Iraq, Afghanistan and Syria, and therefore more cautious about overseas military deployment. These include Robert Malley, who coordinated Middle East policy for the National Security Council in the Obama administration; Suzanne DiMaggio, from the Carnegie Endowment for International Peace; and Vali Nasr, dean of the Paul H. Nitze School of Advanced Studies at Johns Hopkins (and scion of a family closely connected to the Shah of Iran).

The New Yorker profile observes shrewdly: “Perhaps a half-dozen people, maybe fewer, can realistically imagine themselves as the next President of the United States, and Sanders has as strong a case as anyone except the incumbent. For the moment, the pressures of power seem to be working on him; the fiery-sermonizer figure is in retreat, and he is sounding notes of caution.”

In just the past nine months, the World Socialist Web Site has noted Sanders’ praise of warhawk John McCain; his celebration of the decision by Jeff Bezos, the richest man in the world, to pay Amazon workers a miserable $15 an hour (in many cases a pay cut because of the loss of other compensation); his support for US provocations against Venezuela; his boasting of being the best builder of the Democratic Party; his chiming in alongside of Trump in declaring his opposition to “open borders” and warning that an influx of impoverished refugees would threaten the living standards of American workers; and his criminal public silence on the British police seizure of WikiLeaks founder Julian Assange, who now faces extradition to the United States and possible capital charges of espionage and conspiracy.

Sanders’ nationalism and his support for the foreign policy of the American ruling class expose the fraudulent character of his supposed “socialism.” It is impossible to oppose the “billionaire class” at home while supporting its policy abroad. War—and this is the logical extension of Sanders’ demands for an aggressive economic policy against China—is inevitably accompanied by domestic repression and social reaction.

The Democratic Socialists of America, Jacobin magazine, Socialist Alternative and the rest of the pseudo-left acolytes of Sanders hail his candidacy as the basis for reviving the “left” in America—i.e., reviving the Democratic Party by giving it a “left” coat of paint. The Socialist Equality Party warns workers and youth that the Sanders campaign of 2020, like its precursor four years ago, is aimed at trapping the movement of the working class within the confines of this right-wing capitalist party and blocking the emergence of a genuine, independent mass political movement of working people, fighting on a socialist and antiwar program.

ABOUT THE AUTHOR
PATRICK MARTIN is a senior editor at wsws.org, a Marxian publication.

Iran, Judeophilia And Dementia On The German Left

Note To the Environmental Community

Eric Schechter I don’t know why WSWS keeps picking on Sanders. One of the imperialists IS going to win the election, and they’re not all identical; Sanders is less bad than any of the others who have any chance of winning. Thus, voting for Sanders is actually our best strategy in the voting booth. (Of course, it would be a mistake to confine our actions to the voting booth.) In fact, I’d give Sanders a higher rating than “less bad.” Though WSWS disagrees with me about this, I would give Sanders’s 2016 campaign credit for convincing most of the American… Read more »