Home ABOMINATIONS Hurricane Matthew vs. Shock and Awe of Empire

Hurricane Matthew vs. Shock and Awe of Empire

May 13, 2019
BE SURE TO PASS THESE ARTICLES TO FRIENDS AND KIN. A LOT DEPENDS ON THIS. DO YOUR PART. 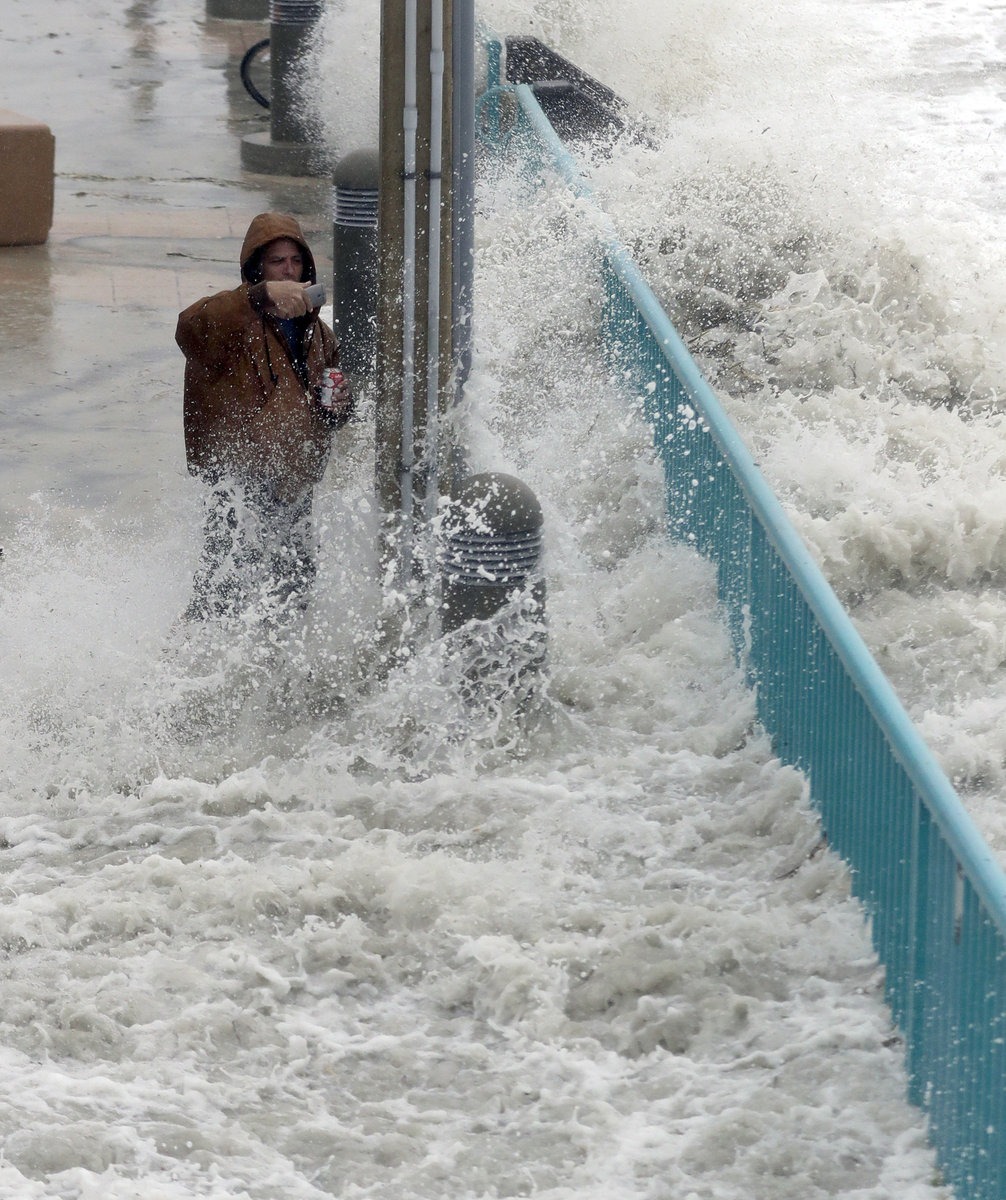 Man taking a selfie as Hurricane Matthew begins to whip Daytona, FL., in 2016.

On Friday October 7th, 2016 we were awaiting the hurricane named Matthew that was fast approaching Daytona Beach Florida. My wife and I were hunkered down in our master bedroom in what was supposed to be the safest part of our townhome. Matthew was slowly getting closer from the east, and the winds were picking up. At around 11AM a category 3 monster attacked us with its shock and awe. As we were ready to crawl into our bedroom closet, with our two kitty cats in their travel cases in the bathroom, the 100 mph winds were causing havoc  to our neighborhood. I crawled past the barricade of our two chests of drawers to peer out the bedroom window. I could see the pine trees out back just bending to and fro. At that moment I felt this uneasy, frightened feeling in my gut. I was scared shit! I looked at my wife and tried to hide the desperation that overwhelmed me… thoughts of all of us being killed by a tree crashing into our bedroom! Moments later, before we went into the closet to ride this devil out, a crash! A powerful crash that felt like a bomb had hit our house. Boom! I ran to the window and saw where the pine tree behind our house had snapped from the middle, flying into and through our roof.  We hustled upstairs and saw a branch of that tree dangling like a Christmas tree ornament from the bedroom ceiling. Then the heavy rain had found its way into our domain. It ran like a fountain down the walls! We used up every towel and comforter we had in our home to soak up as much as we could… for sixty minutes we did this, and then the storm began to ease up.  A neighbor down the street  invited us to go and stay in her late father’s empty house. It literally took us two hours to finally have the courage to leave our home, run to our car outside, pack it with clothes and our kittens and drive down the street, while two pine trees waving out front seemed ready for another attack. Fallen trees and debris made our street look like perhaps Berlin in April of 1945.

I wish everyone, and I mean everyone who had ‘ waved the flag’ and vociferously supported our country’s attacks  on Afghanistan, Iraq and Libya, using shock and awe in all instances, could have been here with my wife and I on that fateful day. To experience what we went through for but a few hours, and then pause and study the damage our carpet bombing campaigns had done to the people of those three nations would be most enlightening to say the least. Imagine being a mother and father with a few small children, hunkered down in some highly vulnerable home, and hearing the ghastly whistle sound of the bombs being dropped on them. Take that one solitary boom and shock that we heard and felt on October 7th here in Daytona, and multiply it by a hundred recurrences  over a period of days or weeks. Seeing your child’s arm or eye blown away, with the blood flowing like that rain down the walls of my home, and maybe then one can realize just how brutal our Shock and Awe was. So easy for the two empire’s puppets, running for President in autumn of ’16, to talk of being tough and powerful, when it isn’t their families that are under the jackboot of Uncle Sam. Shame on them! And shame on those of you out there who will support leaders and wanna be leaders who strut like peacocks waving MY flag. Yes, MY flag should not be for sale. Too many good men and women have lost their lives for it. Too many other good men and women have lost their limbs, eyes and even their brains because of phony Shock and Awe con men who they believed in.

Footnote- After that terrible experience, our boy cat still runs and hides at any semblance of thunder, lightning and or rain. My wife, who never had panic attacks in her life, started getting them, and still suffers from anxiety each day. Imagine what those poor creatures in those Middle Eastern countries have been left with after our ‘ Pax Amerikana ‘ visited them?

Shock and Awe was an act of imperial bullying and cowardice. Nothing to be proud of. At least Mother Nature is never morally vile when it visits violence on living creatures.