In a historic assault on the freedom of the press, the US Justice Department announced Thursday that WikiLeaks publisher Julian Assange had been indicted on 17 counts under the Espionage Act.

Assange is being persecuted by the US government for carrying out journalistic activities protected under the First Amendment of the US Constitution. The indictment alleges that Assange, “having unauthorized possession of, access to, and control over documents relating to the national defense, willfully and unlawfully caused and attempted to cause such materials to be communicated, delivered, and transmitted to persons not entitled to receive them… by publishing them on the Internet.” 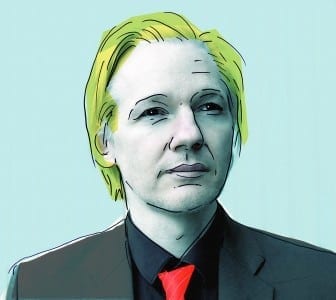 Assange: Where's the Zola of our generation? (cc by Mataparda)

The new charges supersede a previous indictment against Assange released in April, related to alleged computer hacking and carrying no more than five years in prison. These charges were simply a fig leaf to give Ecuadorian government cover for ejecting Assange from its embassy in London.

The charges carry up to a combined 170 years in prison. However, there is nothing to prevent US authorities from bringing additional charges bearing the death penalty if he is extradited to the United States from his current imprisonment in the UK.

The prosecution of Assange is the spearhead of the drive by the American ruling class to eviscerate the First Amendment and dismantle democratic rights. If Assange is convicted, it will mean that the publication of documents outlining the illegal activities of the US military/intelligence apparatus will be effectively criminalized.

Chelsea Manning, the former Army intelligence officer who provided the documents released by WikiLeaks, condemned the indictments, declaring that administration officials “use the law as a sword, and have shown their willingness to bring the full power of the state against the very institution intended to shield us from such excesses.” Manning remains imprisoned for contempt after she courageously refused to testify before the grand jury hearing the case against Assange.

Those who carried out these crimes have gone unpunished, and in many cases—including that of current CIA Director Gina Haspel—retain posts at the highest levels of the American state.

[With typical treachery] in the very editorial criticizing the attack on the First Amendment, the Times lends credence to the Justice Department’s case, declaring that “there is much to be troubled by in Mr. Assange’s methods and motives, which remain murky.”  In its accompanying “news” article, the Times states as fact that Assange has “morphed” into a “tool of Russia’s election interference,” and that WikiLeaks “published Democratic emails stolen by Russia as part of its covert efforts to help elect President Trump.”

The move marks the first time that a journalist has been charged under the 1917 Espionage Act.

US prosecutors attempted to convict Daniel Ellsberg, a contractor at the RAND Corporation who photocopied internal reports on the Vietnam War and distributed them to the press as the Pentagon Papers, under the act. Based on its claims that Ellsberg violated the law in obtaining the documents, the Nixon White House attempted to stop the New York Times and Washington Post from publishing the papers.

In its 1971 ruling on the New York Times Co. v. United States, the Supreme Court upheld the right of the Times to publish the stolen secret documents, declaring, “Only a free and unrestrained press can effectively expose deception in government. And paramount among the responsibilities of a free press is the duty to prevent any part of the government from deceiving the people and sending them off to distant lands to die of foreign fevers and foreign shot and shell.”

The prosecution of Assange for publishing “documents relating to the national defense” represents an attempt not only to reverse this ruling, but to make the very dissemination of documents by journalists a crime.

The New York Times published an editorial Thursday night stating that the indictment “is a marked escalation in the effort to prosecute Mr. Assange, one that could have a chilling effect on American journalism as it has been practiced for generations. It is aimed straight at the heart of the First Amendment,” which protects “the ability of publishers to provide the public with the truth.”

The editorial concludes that the “case now represents a threat to freedom of expression and, with it, the resilience of American democracy itself.”

However, for the last decade, the Times’ coverage of the persecution of Assange has been compromised by malicious hostility to the WikiLeaks publisher. Indeed, in the very editorial criticizing the attack on the First Amendment, the Times lends credence to the Justice Department’s case, declaring that “there is much to be troubled by in Mr. Assange’s methods and motives, which remain murky.”

In its accompanying “news” article, the Times states as fact that Assange has “morphed” into a “tool of Russia’s election interference,” and that WikiLeaks “published Democratic emails stolen by Russia as part of its covert efforts to help elect President Trump.” The anti-Russia narrative, promoted by the Democratic Party and the media, has been used not only to justify the persecution of Assange, but also to create the framework for internet censorship and other attacks on free speech.

For years, both the Times and the Post lent credibility to the US government’s fraudulent campaign against Assange and the manufactured allegations of sexual assault. When Assange was dragged by British police from the Ecuadorian embassy last month, the Times commended the White House’s handling of the case, declaring, “The administration has begun well by charging Mr. Assange with an indisputable crime.” The Post likewise praised his arrest, declaring Assange to be “long overdue for personal accountability.”

Assange, the Times states in its news article, is not a “conventional journalist.” Yes, he is not “conventional” because he does what the corporate media dares not do—fearlessly expose the crimes of the American state. Over the past two decades, the media, led by the Times, has transformed itself into an apologist and propagandist for the United States’ endless wars.

This reality was summed up by the boast by former Times Editor Bill Keller in 2010 that “Freedom of the press includes freedom not to publish, and that is a freedom we exercise with some regularity.” Assange and a small number of other journalists have refused to go down that road.

All those involved in the attack on Assange—from the Trump administration, which has filed charges against him; to the media and the Democratic Party, which have supported his persecution and provided the political ammunition; to the various pseudo-left, upper middle class organizations that have justified his arrest or remained silent—bear responsibility not only for his tragic situation, but also for the precarious state of the First Amendment and democratic rights as a whole.

The working class is the only social force committed to the defense of democratic rights, and it is the working class, mobilized on the basis of a socialist perspective, that will free Assange. It is urgent that the fight for the freedom of Julian Assange and Chelsea Manning be extended and connected to the growing struggles of workers throughout the world against inequality, war, authoritarianism and the capitalist system.

ABOUT THE AUTHOR
Andre Damon is a senior editorialist with wsws.org, a Marxian publication.

What the West can learn: Yellow Vests are demanding a Cultural Revolution (8/8)