Despite Mueller debacle, Democrats step up call for crackdown on “foreign meddling”

July 26, 2019 8 minutes read
Another important dispatch from The Greanville Post. Be sure to share it widely.
This essay is part of our special series on disgusting imperialists

[dropcap]W[/dropcap]ednesday’s testimony by former Special Counsel Robert Mueller before Congress, staged by the Democrats in the hope of reviving their discredited anti-Russian campaign and presentation of Trump as a stooge of Putin, turned into a debacle.

Mueller, who had repeatedly declared his unwillingness to testify before Congress, refused to say anything beyond the official report he released four months ago. That 448-page document acknowledged that his nearly two-year investigation had failed to substantiate the claims of the intelligence agencies and the Democrats of Trump campaign collusion with Russia in the 2016 elections.
[su_panel background="#fdfdfe" border="2px solid #165ade" shadow="4px 1px 4px #eeeeee" radius="11"] 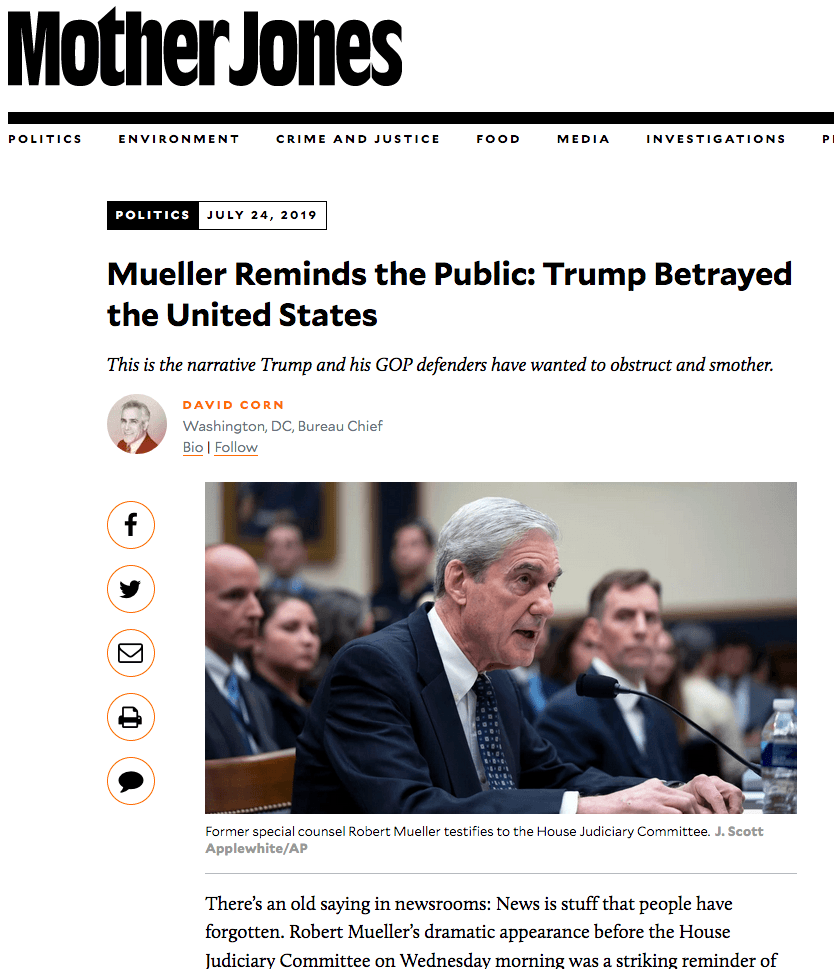 [/su_panel]
ABOVE: THE FAUX LEFT CLOSES RANKS IN SUPPORT OF ESTABLISHMENT CLAIMS OF RUSSIAN MEDDLING
The "liberal / Democrat alternative" media, among which the once progressive Mother Jones remains a prominent organ, stuck to their Trump derangement syndrome guns and idiotic russophobia. Here's a piece by MJ DC editor David Corn arguing that Mueller's hearing was actually a success, and that Russian meddling in our (illusory) democracy is something to be aggresively vigilant about.

The man who was built up by the Democrats as the ultimate patriot and savior of American democracy was unable to recall key details of the report he nominally authored. “If it’s from the report, yes, I support it,” he repeatedly said in response to lawmakers’ questions.

“Much as I hate to say it, this morning’s hearing was a disaster,” declared Laurence Tribe, the Harvard law professor and prominent Democratic advocate of impeachment. “Far from breathing life into his damning report, the tired Robert Mueller sucked the life out of it.”

“Mueller Disappoints the Democrats,” sighed the New York Times in an article by Peter Baker, who over the past three years has churned out innumerable breathless exposés, based on anonymous intelligence sources, of Russian “collusion” with Trump.

“In the days leading up to the special counsel’s much-anticipated appearance before Congress,” Baker wrote, “Democrats argued that hearing from Robert S. Mueller III on television could transform the impeachment debate.” But Wednesday’s event “was not the blockbuster Democrats had sought, nor was Mr. Mueller the action star they had cast.”

Dan Balz, the chief national correspondent for the Washington Post, wrote that for Democrats who considered Mueller “the agent of President Trump’s eventual undoing… Wednesday’s hearings on Capitol Hill probably shattered those illusions once and for all.”

The Democrats’ efforts to foment a palace coup based on sections of the military and intelligence establishment have only lent credence to Trump’s demagogic posturing as an opponent of the “un-elected deep state operatives who defy the voters to push their own secret agendas,” as he put in a speech last year.

Trump’s crisis-ridden administration, broadly despised by the American people and buffeted by crises at home and abroad, emerges strengthened from this entire sordid affair. The hearing caps a series of capitulations by the Democrats on issues of substance—from the funding of Trump’s fascistic anti-immigrant policies to his massive boondoggle for the military, capped by Thursday’s vote by the Democratic-controlled House to approve a two-year budget extension.

On the eve of the Mueller hearings, emboldened by the Democrats’ fecklessness, Trump made his most sweeping assertion of untrammeled executive power to date, declaring that the American constitution gives him “the right to do whatever I want.”

Mueller’s performance exposed the fraud of the claims by the Democrats, the major print and broadcast media outlets, and substantial sections of the Republican Party that the “Russians,” in league with WikiLeaks and its imprisoned and persecuted founder Julian Assange, are guilty of “sowing divisions” in American society. As though it took “outside agitators” to stir up social discontent in a country where the three richest individuals have more wealth than the bottom 160 million combined!

Wednesday’s debacle will not, however, deter the Democratic Party and its media allies from pursuing their right-wing anti-Russian witch hunt, or extending it to China and other countries in the crosshairs of American imperialism. The New York Times and Washington Post both responded to the pathetic spectacle on Capitol Hill by demanding an intensification of US efforts to crack down on supposed “foreign meddling.”

The latter term is a euphemism for the bipartisan drive to censor the internet and criminalize independent and critical journalism, embodied in the jailing of Assange and Chelsea Manning. Prompted by the Democrats, Mueller used Wednesday’s hearing to condemn what he called “illegal activity” by WikiLeaks.

In an editorial titled “They’re Doing It as We Sit Here,” the New York Times praised Mueller’s call for “legislation to improve information-sharing and other coordination among intelligence agencies.” Bemoaning the fact that Mueller’s warnings about “Russian subversion of American democracy” were not being heeded, the Times complained that “Nearly all Republicans on both committees failed even to acknowledge the threat posed by Russia and other countries.”

While the Times’ lurid claims of “Russian meddling” are absurd lies, the policies being implemented are very real. Congress has compelled every major technology company to implement a sweeping censorship regime, disproportionately affecting left-wing, anti-war websites and organizations. In addition to the frame-up of Assange, the Trump administration, with Democratic support, has imposed new limits on visas for Chinese students, claiming they are, as FBI director Christopher Wray told congress “unconventional collectors,” i.e., spies.

A certain balance sheet can be drawn on this politically degraded episode in American history. The past two-and-a-half years of anti-Russian hysteria have made clear that the Democrats agree with the vast majority of Trump’s domestic program. For three years in a row, they have voted record increases in the military budget, a fact that Trump notes prominently every time he gives a fascistic speech to a military audience.

The Democrats’ objections to the Trump administration have revolved around differences over foreign policy. They have demanded that the White House adopt a more aggressive posture against not only Russia, but increasingly also against China. They have repeatedly warned against backpedaling by Trump on US efforts to destroy Chinese technology giant Huawei.

From the start, the Democrats’ efforts to foment a palace coup have been aimed at demobilizing and disarming the mass opposition that exists to the Trump administration. To the extent that Trump appears strong, it is due only to the spinelessness of his cynical and cowardly political opponents in the Democratic Party.

The entire experience since Trump took office makes clear that it is impossible to seriously oppose the fascist in the White House by supporting or seeking to pressure the Democratic Party. What all factions of the ruling elite and American political establishment fear is an eruption of the mounting social opposition in the working class, which threatens their wealth and privileges. If they had to choose between Trump and a mass popular movement to remove him, all factions of the Democratic Party have made clear that they would choose Trump.

It is one thing, however, to run circles around the Democrats. It is quite another to face down real popular opposition. Trump, who has maintained the lowest net approval rating of any president since World War II, remains immensely hated.

If a march were called in Washington seriously opposing Trump, the turnout would be in the millions. This week’s events in Puerto Rico, in which mass popular opposition has forced the resignation of the hated Wall Street puppet who served as its governor, is only a foretaste of what is brewing on the American mainland.

This emerging mass movement must assume the form of a conscious struggle to unite the working class against all factions of the ruling class in the fight for socialism. This requires the building of a new political leadership. <>

About the author(s)
Andre Damon is a senior analyst with wsws.org, a Marxian publication.