The ‘Total Anarchy’ of Wet Cops 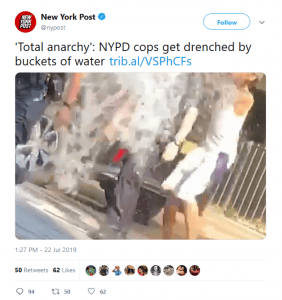 The family of Eric Garner, the Staten Island father infamously choked to death by a New York City cop in 2014 (Extra!, 1–2/15), was told last week by the Justice Department that charges would not be brought against that officer. Family members and activists responded with fury, mostly aimed at Mayor Bill de Blasio, whose refusal to fire the officer, Daniel Pantaleo, allows his abusive run at the NYPD to continue.

This week, however, an event deemed more outrageous and reprehensible by the press took the spotlight away from the Garner saga: Police officers were doused with water during a record heatwave.

No one was hurt in the two separate water-throwing incidents, which involved squirt guns as well as buckets of water, but unlike copaganda coverage of NYPD officers engaging in a snowball fight with kids—framed as “heartwarming” by local media—this time a moral panic ensued, as media and police brass proclaimed that “disrespect” cannot be tolerated. In the barrage of hand-wringing and finger-wagging stories that ensued, we are given insight into the deep, ideological concern for cops that some media outlets harbor as they amplify voices that distort reality and shift victimhood onto the police force.

Our journey begins in the pages of the New York Post  (7/22/19), which broke the story of the watery carnage on Monday. The original headline, since changed, alluded to a total breakdown of civilized society: “‘Total Anarchy’: NYPD Cops Get Drenched by Buckets of Water.” The “total anarchy” remark was attributed to anonymous police sources, which are often the most-cited voices in the pages of the local tabloids; they added that “there’s lawlessness around here now.”

No, the “lawlessness” the anonymous police source was referring to was not the unpunished killing of black people like Garner by police. Police uniforms were wet, a clear sign of the unraveling of the fabric of society. The head of the Patrolmen’s Benevolent Association, Pat Lynch (who has long maintained that Garner, in fact, killed himself), went further and made the case in the pages of the Post that “dangerous levels of chaos in our neighborhoods” meant that police should “take action”—whatever that means:

We are approaching the point of no return. Disorder controls the streets, and our elected leaders refuse to allow us to take them back. 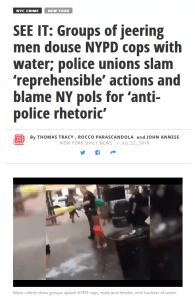 The Daily News (7/22/19) joins the panic over NYPD officers being dampened, sometimes by small children.

Police claims of “lawlessness” and “chaos”—uncritically platformed in the Post and the New York Daily News (7/22/19)—are a hard sell today with the city’s crime rate continuing at record-low levels. However, Lynch’s comments about “disorder” and taking back the streets are revealing. Is he suggesting taking back the streets, politically and literally, from anti-police brutality demonstrators, like those who support justice for Eric Garner? Is he clamoring for more aggressive policing in already hyper-policed communities of color?

Claims of “disorder” are not without their political meaning in New York City, where “order” has been a bedrock value for supporters of heavy-handed policing, perhaps most famously articulated through the “Broken Windows” theory. Broken Windows advocates for enforcement of low-level offenses in the name of order, supposedly thereby preventing more serious crimes.

The theory came under criticism by myself and others after Garner’s death as the racist policing ideology at the heart of the interaction that led to his killing. Researchers report finding little empirical evidence for the notion that disorder sparks serious crime—but there’s considerable reporting that overpolicing of minor offenses helps create create hostility between law enforcement and the community.

So why do the Post and the News fill their pages with the musings of anonymous cops and the police brutality–denying Lynch? Perhaps because they share their worldview. Both local tabloids have editorialized in support of a host of discriminatory police tactics, from Stop and Frisk and Broken Windows policing (FAIR.org, 7/3/16, 3/8/16) to the NYPD’s controversial gang database (FAIR.org, 6/28/18).

Local crime reporting by the Daily News may also be skewed by sympathetic reporters. Sharing a byline for a follow-up story (7/24/19) on the wet-cop scandal, which covered the arrest of one man allegedly responsible for the “mayhem,” was Larry McShane. McShane, one of the News‘ longest-serving criminal justice reporters, is also the author of the 1999 book Cops Under Fire: The Reign of Terror Against Hero Cops, which reads like a Pat Lynch press release:

Every day, thousands of police officers willingly put their lives in danger to uphold their pledge to protect and serve the public. Once respected for their dedication and professionalism, police officers are now used as scapegoats—the victims of second-guessing and racial issues. Allegations of excessive force and police brutality are rampant. Cases involving cops are more political, more scrutinized and more explosive than ever before.

In McShane’s account, it’s (presumably white) cops who are “victims” of “racial issues”—and it’s “allegations,” not abuses, that are rampant. 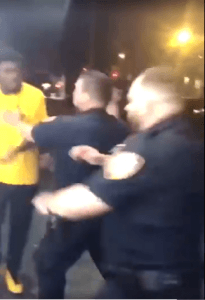 This video (Twitter, 7/9/19) of a Bronx man being beaten and arrested for talking back to the NYPD did not spark media outrage the way cops being squirted with water did.

The adoration of police—and the accompanying anxiety that follows when they are “disrespected”—is a testament to a fascination and solidarity with power and the powerful. When a cop is embarrassed, it can seem like society’s manhood has been denigrated. For some, seeing a cop humiliated suggests a breakdown of society in a way that seeing a cop engaging in the humiliation and abuse of a black person does not.

Take, for example, a viral video posted two weeks ago, showing police officers punching and arresting a black man in the Bronx, apparently for talking back to a group of cops. This is just the latest in a long list of police barbarity. There’s been no media coverage about the video, and hence no growing sense of scandal, because civility, for some, is not threatened when a black person is assaulted and falsely arrested. And in explosive cases like Eric Garner’s death, tens of thousands have to take to the streets so that the injustice can’t be ignored or forgotten.

As this week’s water-bucket panic went national, the Washington Post (7/23/19) published Lynch’s “anti-police rhetoric” claims, without any context as to whether he was referring to public sentiment against police officers killing civilians with impunity, or to Mayor de Blasio—or both. Lynch’s longtime characterization of the mayor as “anti-police” is another gross distortion that the media are unable or unwilling to refute. 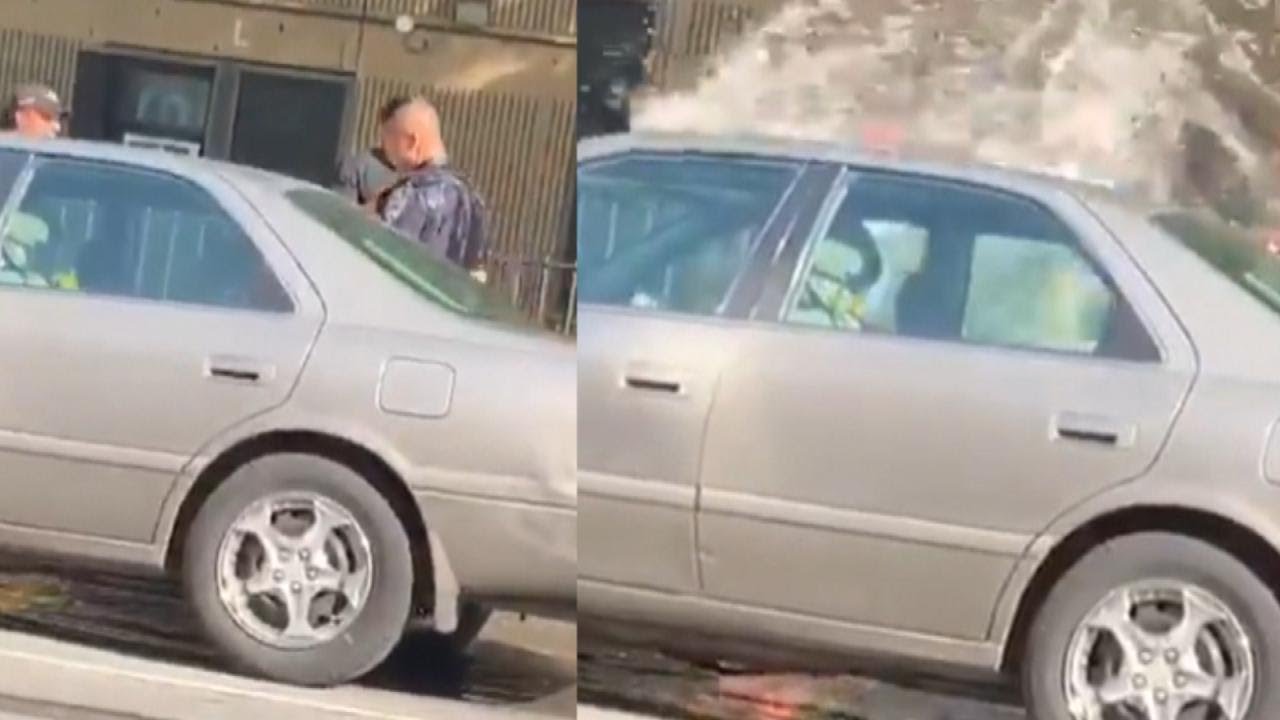 Is the mayor actually anti-police? While the Post can’t be bothered to look into his record on policing, we know that de Blasio has refused to fire Pantaleo for over five years, shielded officer misconduct from the public, allowed the department to obtain drone technology and added 1,300 cops to the city. If that doesn’t sound like any “anti-police” official you know, don’t worry, Lynch’s point isn’t to say anything that’s true, it’s to drive the political goalposts to the right by accusing a pro-police mayor of the exact opposite—and the media allow it.

The seething outrage of police spokespeople should be analyzed critically by media, because baseless, unchecked police fear-mongering has real world consequences. In 1992, police unions launched a massive protest against then-Mayor David Dinkins, who was trying to create a police misconduct oversight agency. Ten thousand off-duty cops descended on City Hall, broke through police barriers, jumped on cars, assaulted reporters and even called Dinkins, who is black, the n-word.

Those types of actions, however, must not be “total anarchy,” because they’re done by police officers—who are always to be respected, no matter how abusive or unaccountable they may be. 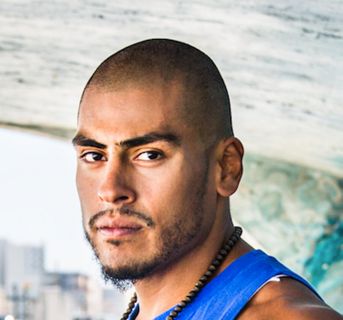 Josmar Trujillo is a former columnist for Extra! who writes at the Huffington Post, Newsday, City Limits and amNY. He is also an organizer with the Coalition to End Broken Windows and New Yorkers Against Bratton.