August 2, 2019
HELP ENLIGHTEN YOUR FELLOWS. BE SURE TO PASS THIS ON. SURVIVAL DEPENDS ON IT. 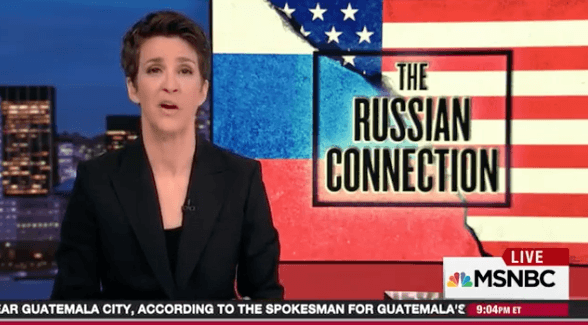 Get short URL
[dropcap]O[/dropcap]nce a shining beacon of hope for Russiagate true believers, it looks like Rachel Maddow has left her best days behind her; MSNBC’s conspiracy queen has seen her show plummet to fifth place in cable news ratings. What happened?

You rise fast and fall hard in the fickle world of television. Just last April, Maddow overtook Fox News’ Sean Hannity to claim the title of most-watched host across cable news. She had become a reliable source for Russigate aficionados to get their daily dose of crazy.

Sadly for Maddow, the latest data released by Nielsen shows her show in fifth place with a total audience of 2.4877 million viewers for July – behind Hannity, Tucker Carlson, Laura Ingraham and The Five (all Fox News shows).

We ask: What is the worst and most heinous type of criminal? A child molester? A serial rapist? A racist serial murderer? A sadistic mass murderer? None of these. The worst possible criminal is a reckless warmonger in a nuclear-armed world. And that is exactly what Rachel Maddow and her ilk are. —Editor

For context, in January this year, Maddow still boasted an audience of nearly 3.3 million, which means she shed around 800,000 viewers in just six months. Maddow was also in fifth place among viewers in the 25-54 age range – the group most-favored by advertisers.

Once dubbed “the smartest person on TV” by Forbes (really), this is certainly not the big payoff Maddow was expecting, having dedicated three years of her career to breathlessly covering every twist and turn in the anticlimactic Trump-Russia “collusion” drama.

There’s no question that Maddow lost a major component of what had made her show so popular when former special counsel Robert Mueller showed up in March having found no evidence of conspiracy or collusion between the 2016 Trump campaign and Russia.

As former MSNBC host Krystal Ball noted last week in candid criticism of her former network colleague, Maddow had “built segment after segment, show after show, on building anticipation for a big reveal” that never materialized. Indeed, Maddow became something of an expert at promising her audience bombshells that never amounted to anything.

Recall the dramatic teaser tweet she sent out in March 2017 one hour before her show, claiming: “We’ve got Trump tax returns. (Seriously).” When the story turned out to be a big nothingburger (all she had was one boring form which revealed nothing particularly interesting), Maddow lashed out at her own viewers, saying people had “leapt” to conclusions.

Ball also accused Maddow of doing damage to the left, having become “swept up in the ratings bubble” that was being sustained by “feverish Russian conspiracy theories.”

It’s true. Seemingly convinced that the Russiagate story would end with Donald Trump being dragged from the White House in a dressing gown with shackles around his feet, Maddow had abandoned major issues that are important to the American left and trafficked in mental conspiracies and outright fear-mongering instead.

How about that time she suggested that Russia might kill the power in Fargo during a polar vortex and let everyone freeze to death? Or the time she spent three whole minutes dramatically building up to ‘reveal’ that Russia and North Korea share a border – followed by 15 more minutes trying to prove that Vladimir Putin had orchestrated and secretly controlled the Singapore summit between Trump and Kim Jong-un.

A study of her coverage by the Intercept last year showed that 53 percent of Maddow’s segments focused only on Russia over a six-week period between February and March.

Of course, there were no slaps on the wrist for Maddow at MSNBC HQ for getting stories drastically wrong or failing to deliver on her promises of Trump-destroying bombshells. In fact, it seemed the more dramatic and off-the-wall her coverage became, the more she was celebrated for it. This staggering fall from ratings grace can be her comeuppance.

Boo hoo, Rachel. If you need to cry, you could always use the piles of money you made from lies as tissues.

Danielle Ryan is an Irish freelance writer based in Dublin. Her work has appeared in Salon, The Nation, Rethinking Russia, teleSUR, RBTH, The Calvert Journal and others. 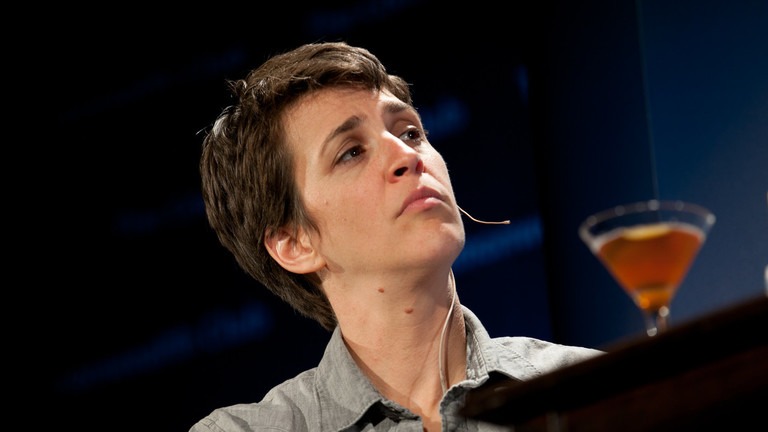 What is worse than a nuclear warmonger in a time of constant provocatoons by the West? (RT.com archives)

Mate, a longtime skeptic of the mainstream media’s beloved ‘Russiagate’ narrative, was the subject of a recent interview with RT. When MSNBC’s Russiagater-in-chief Rachel Maddow found out that YouTube’s algorithm had actually suggested the interview to viewers, she saw more Russian meddling and proclaimed the recommendation “death by algorithm.”

Mate unloaded on Maddow on Sunday, systematically destroying the MSNBC host for her two years as “the leading purveyor of now-debunked Trump-Russia conspiracy theories, falsehoods and innuendo.” Buckle up.

1/ If YouTube were to recommend your show, it'd be recommending the leading purveyor of now debunked Trump-Russia conspiracy theories, falsehoods & innuendo of the last 2+ years. Here's a sample:

“Just recently you were caught in real-time lying to your audience,” he began. “You claimed Barr was handling the redactions by himself. But the chyron – on screen right below – told viewers the truth, that Mueller was in fact ‘assisting’ with the redactions.”

2/ Just recently you were caught in real-time lying to your audience. You claimed Barr was handling the redactions by himself. But the chyron -- on screen right below -- told viewers the truth, that Mueller was in fact "assisting" w/ the redactions: pic.twitter.com/rTSAABngp2

With Maddow seemingly content to lie on live television, it fell upon her show’s producers to flash the truth on viewers’ screens.

Mate then recalled the time Maddow suggested that Russian President Vladimir Putin would use the ‘pee tape’ (the most far-fetched allegation in the Democrat-commissioned, internet-sourced Steele dossier) to force Trump into withdrawing US troops stationed near Russia. Of course, this never happened, and Trump recently announced plans to ramp up deployments to Poland. A swing and a miss for Maddow.

3/ There was that time in Jan 2017 when you speculated that Putin may use the pee tape & other kompromat to force Trump into withdrawing US troops near Russia. How did that one turn out? pic.twitter.com/XuXXagyCNb

Maddow contradicted herself on the ‘pee tape’ only last week, telling viewers she “refused” to let herself “think about” the possibility of these tapes existing.

4/ BTW, just last week you falsely said that "the one thing I refused to let myself think about" was that Putin had tapes of Trump -- the very prospect you had previously floated to posit that Putin may blackmail Trump into withdrawing troops. pic.twitter.com/xMC4uPrjSK

“Who could forget that time this past winter when you seized on life-threatening cold temperatures to fear-monger that Russia could kill Americans by knocking out their heat?”Mate continued, mocking Maddow’s claim that the Kremlin could “kill the power” and freeze Americans to death.

5/ Who could forget that time this past winter when you seized on life-threatening cold temperatures to fear-monger that Russia could kill Americans by knocking out their heat?pic.twitter.com/deo2H4SBBQ

“There was that time when you explored the scenario under which Putin ‘gives orders’ to his puppet Trump at an upcoming meeting,” Mate continued. “Do you think Putin ordered Trump to stage a coup in Venezuela/try to kill the German-Russia gas pipeline/nix the INF Treaty?”

6/ There was that time when you explored the scenario under which Putin "gives orders" to his puppet Trump at an upcoming meeting. Do you think Putin ordered Trump to stage a coup in Venezuela/try to kill the German-Russia gas pipeline/nix the INF treaty? pic.twitter.com/cbSrGt2xR3

Mate ridiculed Maddow for suggesting that the Trump campaign set aside funds to pay for the services of “Russian hackers...”

7/ How about that time when you speculated -- citing the Steele dossier -- that Cohen billed Trump $50k for "tech services" to pay off Russian hackers? It was actually to pay a US firm (https://t.co/GGK6FQLvRJ). pic.twitter.com/TcqdN8mC4z

... that Vladimir Putin installed Rex Tillerson as secretary of state (a job Tillerson was fired from after a year)...

9/ How about the time when you speculated that Putin installed Rex Tillerson as Secretary of State? pic.twitter.com/YiUYWdxpZ5

... and that the existence of an Albanian Bernie Sanders fan page on Facebook was an act of “international warfare against our country.”

14/ Looking back, do you think maybe that declaring that a fake Bernie Sanders fan page run out of Albania amounted to "international warfare against our country" was perhaps a little hyperbolic? pic.twitter.com/5Meg0xLNqg

Despite peddling baseless conspiracies and flagrant Russophobia every night, Maddow remains one of the US’ most popular news anchors, and one of the best paid. The MSNBC host regularly vies with Fox News’ Sean Hannity for the top spot on the cable news ratings, and earns a cool $7 million per year for her work.

Although Maddow has been perhaps the most fervent promoter of Russiagate hysteria on television, her ratings have fallen after special counsel Robert Mueller’s report put most of her theories to bed last month. Maddow’s show slipped from its number one position after the report dropped, and lost half a million viewers in the space of a week.

Mate, although reporting to a far smaller audience, has received an Izzy Award for his“meticulous reporting” that “challenged the way the public was being informed about the Mueller investigation.”

DEBATES: Why is libertarianism wrong?