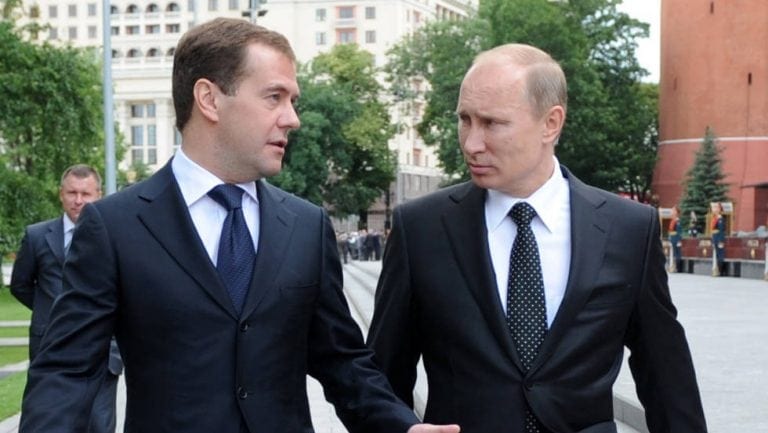 Putin and Medvedev: long pulling in opposite directions. Putin's reshuffle may secure a safer path for Russia, and a probable weakening of the "Atlanticist" current in Russia.

In groundbreaking news President Putin announced today, 15 January, in his annual address to the Nation, major changes in his government. First, he announced that Prime Minister Dmitry Medvedev and his entire cabinet resigned and will eventually be replaced by a new PM and a new cabinet. A timeline was not given. In the meantime, they would carry on with their functions as ‘normal’. Well, how normal can this be for a group of “lame ducks”?

A second important point of Mr. Putin’s speech focused on shifting power away from the Presidency to the Duma, or Parliament. The Duma shall have more power in a better balancing act between the Presidency and the voice of the people, i.e. the Parliament. The possibility of referenda, with people voting, is also foreseen. A move towards more ‘democracy’. Some interpret this as a reaction to western criticism of Russia being a dictatorial state and this move should alleviate Russia from this accusation. I don’t think so. Western accusations are random, when it suits them, never based on facts, but on lies.

For example, the change in government power foresees some changes in the Russian Constitution, but not a rewrite at all, as Mr. Putin stressed. The term-limitation of the Presidency should also not change, no more than two. It appears the “no more than two in a row” – should be amended, and the “in a row” deleted. That would mean, that President Putin would have to leave the Presidency definitely in 2024, when his current term is up. This may be one of those Constitutional areas to be confirmed by the Duma - or not.

But could Mr. Putin become PM and still run Russia from behind the scene? As he did from 2008 – 2012, under then President Dmitry Medvedev. This was not discussed.

When PM Medvedev explained his resignation, he referred to Article 117 of the Russian Constitution, which states that the government can offer its resignation to the president, who, in turn, can either accept or reject it. Mr. Putin, of course, accepted it, thanking PM Medvedev and his Ministers for their good work and service to Russia. Although there was no visible hostility between Putin and Medvedev, this move has most likely been discussed and negotiated months ago.

Mr. Medvedev was offered the post of Deputy Secretary of Russia’s Security Council, a job that first had to be created, according to Mr. Putin. This rank is clearly a few steps down from Prime-Minister. PM Medvedev and President Putin are both members of the United Russia Party, but Medvedev has the reputation of being an Atlantist, meaning, leaning strongly towards the west, western political philosophy. The Russian financial sector is still infiltrated with Atlantists, some may call them Fifth Columnists.

All the while seeking to improve relations with Europe – a logical step – President Putin is adamant to detach from the US-dollar dominated “sanction-prone” economy. And rightly so. Might this explain the departure of PM Medvedev? – As of this morning, there was no mention of a favored replacement as PM. This may take a while. Seemingly no problem, as all the key activities are still covered by the “caretaker” government. The entire change of government was presented as “relaxed”, “no big deal”, a natural process for improving the functioning of the Russian government. Yet, this has never happened in “modern” Russia, in the last 20 years, under Mr. Putin’s leadership.

Duma members interviewed saw it generally as a positive move. They will now have more power, and more responsibility. They will have a say in key appointments, including of the Prime-Minister and his cabinet, while the final decision rests still with the President.

What is important to notice, is that the present “democratization” of the Russian government comes at a time when Mr. Putin’s public approval is still around 70%, a slight drop since his reelection in 2018 with 77%.

The Duma with its new powers, will be asked to look at some aspects of the Constitution (as of yet no details are officially defined) with a view of possibly modifying them. Given Mr. Putin’s high popularity and Russia’s economic and political stability, Russia’s military superiority – despite the constant western interference, or attempted interferences – preserving that stability and continuous economic prosperity is important, i.e. continuity in the Presidency and the Government is crucial. Thus, wouldn’t it be conceivable that the Duma might lift the term-limit for the Presidency altogether?

Although, at this stage much of this is speculation. But assuming that some of the strategy behind this change – the “power equalizing move” – goes in this direction, then the timing is perfect. A new Decade, a new Era. And Putin remains the key player – the one who has made of Russia what she is today – a proud, independent, autonomous nation, that has despite all sanctions and western demonization – not only prevailed, but come out on top.