Citizen Assemblies Are Challenging the Neo Liberal Model in Chile

If a Chilean was told a year ago that in a few months he would find popular assemblies in his neighborhood to give his opinion and decide on the future of his country, he surely would not have believed it. But it’s happening. October 18, 2019, marked a before and after in Chile. The social uprising that began with high school students jumping the turnstiles of the subway is now requiring new forms of organization. 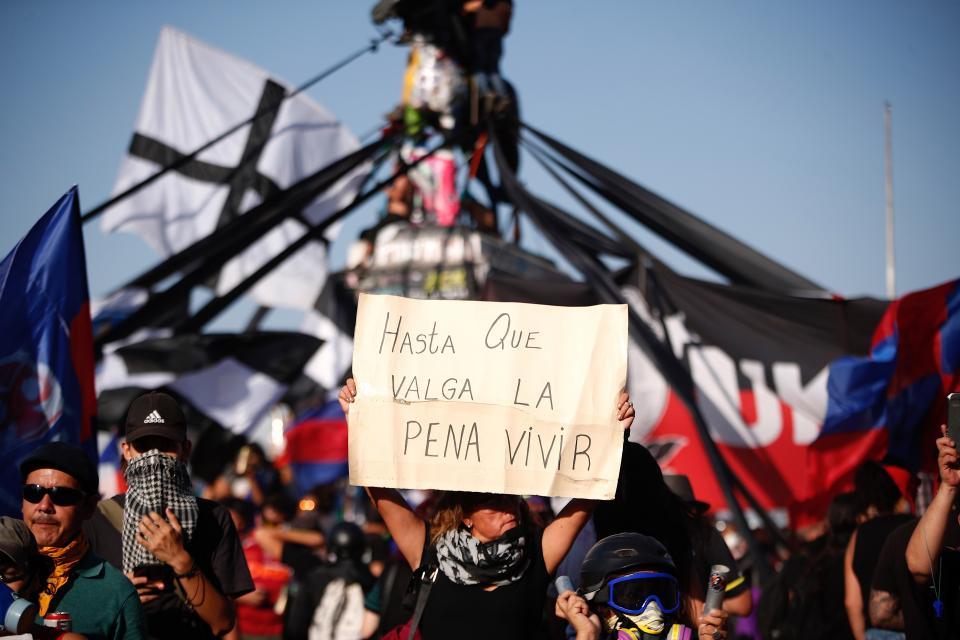 The sign says it all: "Until life is worth living again!" Poetic ferocity.

The Chilean people are wisely drifting toward the formation of popular councils—what we used to call soviets.

One of the most extraordinary phenomena is the thousands of these assemblies that were created in every corner of the country. Just as during Argentina’s crisis in 2001, neighbors are meeting to comment about their reality and take concrete measures against the repressive model headed by President Sebastian Piñera.

“We started to question the way we live”

The Marin Assembly meets a few blocks from Dignity Square, the so-called “ground zero” of Santiago de Chile’s demonstrations. Priscila Rojas, 37, is one of the neighbors who is part of the meetings. “This assembly began as almost all of them did, spontaneously due to the popular rebellion of October 18, after the Government started to repress students and brought soldiers to the streets,” Priscila explained. Cacerolazos, which means making noise by banging pots and pans, were the way common people used to express their opposition to the terrible repression that was just beginning. “One cacerolazo after the other led the neighbors to start talking to each other. And that’s how the assemblies began. Living in such a neoliberal model as Chile’s means not only establishing economic relations but it is also a way of life that had become very individualistic. The assemblies came to break with all that,” Rojas said.

Suddenly, Santiago de Chile seems to be the scenario for a surrealistic movie: tens of neighbors began gathering in street corners or in squares, occupying public spaces. Carlos Villalobos, 43, is also a member of an assembly in Santiago. He tried to explain to Argentina’s newspaper Pagina 12 what it means to be living this unique moment. “We are living in a total break with the everyday life to which we were subjected. That’s why the atmosphere is very special, invigorating and very joyful. We are recovering the sense of humanity from the rebellion, from the appropriation of the spaces by our communities,” Carlos commented.

But far from being ideal spaces, assemblies are full of contradictions and tension. Accepting the gaze of others and building in the community is a challenge. “In my assembly, there are people of all ages, with very different backgrounds. The truth is that there is a bit of everything. And what we see is that there is an emptying of content in people’s normal discourse. Just imagine that we have now been meeting for a few months and an ordinary neighbor who probably refrained from political participation is now interested in his country’s future. Therefore, he is practicing his opinion,” Villalobos noted. But the meetings were fostered by the need of venting about the outrages committed by Chile’s economic system against the population. “We began to question the system that was imposed on us for over 30 years. That is one of the topics we could not avoid in every meeting. We also gathered to resist the enormous repression that we were living at the time and that still continues,” Rojas added.

“The Carabineros police seem like a foreign occupation army”

A few days after the popular uprising began in Chile; President Sebastian Piñera ordered a curfew and decided to use soldiers in the streets. The image of trucks loaded with soldiers traveling around the country was a hard blow for the memory of many Chileans. During those days and until today, there is bloody repression with thousands of complaints of human rights violations. If such repression was violent in Santiago, despite all the media reporting every day, it’s hard to imagine how it was in less visible areas of the country. Andrea Gonzalez, 30, is a member of the Marga Marga Assembly in Quilpué, an area of green valleys located between the cities of Santiago and Viña del Mar. Gonzalez commented that her city’s police station is infamous for having the highest number of complaints nationwide given the brutal actions of its personnel. “Here there were rapes, torture, humiliation, even kidnappings, mainly of children and women. In our assembly, we understood that we had to do something more than denouncing [these outrages]. So, we decided to protest in front of police stations, to monitor the police activity. We moved to the surroundings of the police station. We slept there so that we could pressure and somehow prevent them from violating and raping our children,” Gonzalez said.

Facing the fear embodied by the police corps inherited from the Augusto Pinochet dictatorship is a great challenge for a large part of the Chilean population. “Many of our adults seemed to be very scared. What we have been living for 100 days they lived it for 17 years and with much worse horrific situations than what we can imagine. However, we decided to do something about it in our assemblies because we understood that this fear was one of the reasons why Chile took so long to rebel,” Rojas explained. “We are facing some sort of foreign occupation army that sees citizens as their enemies,” Villalobos said to explain what the Carabineros police generate among the population.

A deep criticism of the neoliberal system is the common denominator in the assemblies. People are talking from their exhaustion of a system that wore them down. They don’t want to continue living in debt; they don’t understand why they have to pay expensive basic services while the elite fills their own pockets. It is their dignity that the Chilean people are demanding in the streets. And the assemblies are the space to express their exhaustion from party politics. “What emerges in our assemblies is the need to build a new institution that allows the people to take part in the decision making process. A participatory democracy, not a representative democracy,” Villalobos argued. Outside Santiago’s Marin Assembly, the Marga Marga Assembly is also putting on their agenda the need to denounce the serious socio-environmental crisis generated by the Chilean model. “Real estate development is devastating our native forests and is moving towards the vegetation of our hills. We have to understand that they are the foundation to inhabit our territory with dignity,” Gonzalez said.

The Chilean people have said enough. Grounded in organization and unity, the assemblies are projecting a determination to not repeat the measures that have enriched only a few. Priscila, a member of the assembly in Santiago, explained it like this, “We are the generation that did everything the model demanded from us to succeed, to live the life of surplus that neoliberalism promises. But we realized that even doing so it will not work. If we continue that path, our parents will continue to die poor. That’s it. No question the choices are resist or resist.”

Juan Manuel Boccacci is an Argentinian journalist working with Barricada TV, Pagina 12, and other outlets. He is based in Buenos Aires.

Two Birds with One Flu: Coronavirus is US’ Latest Weapon Against China…and its Own Dissidents