February 12, 2020
Please make sure these dispatches reach as many readers as possible. Share with kin, friends and workmates and ask them to do likewise.

The myth of US American “greatness” is not only a right-wing narrative. Liberals too embrace the concept that the nation is fundamentally good; certainly, they insist, our worst days are behind us and we can all be grateful for the progress we’ve made. Leading us on this shining path—they say— have been enlightened figures like Lincoln, FDR, Kennedy, Carter and Obama, all of whom have sought to fulfill the promise of the wise “Founding Fathers” and their brilliant (even sacred) Constitution.

In her recently released book, “Prejudential: Black America & the Presidents,” writer and activist Margaret Kimberley skewers this fantasy. She takes on every president from Washington to Trump, with a chapter devoted to each. With the accessible, no-nonsense but pointed style she employs in her weekly Freedom Rider column on Black Agenda Report, Kimberley summarizes the words and deeds of the 44 men who have held the office. The facts are damning.

I consider myself a history buff and have read many books and articles about US history in particular, but there wasn’t a single chapter that didn’t contain surprises for me, in some cases big ones. Some of the things that were new to me:

Kimberley’s volume is packed with such information. A single reading is not enough to absorb it all. As a compilation of history, it belongs on the shelf next to the works of Howard Zinn and Roxanne Dunbar-Ortiz. It should be required reading in every school.

On the topic of our collective historical amnesia on these topics, Kimberley writes:

“Why are these facts not widely discussed today? The United States still basks in the glory of a romanticized past. If white people had the right at the time to kill Indians and take their lands and turn those lands over to the plantation economy, then they probably harbor related feelings of entitlement today. If the institutions of slavery and its aftermath aren’t examined, then objective truths like the inordinate number of blacks being killed by police won’t be questioned, either. If people like [Zachary] Taylor could steal half of Mexico and be labeled heroic, then modern-day presidents can invade nations, change regimes, and kill with mechanized drones and be considered heroic, too. Today’s propaganda differs little from that of Taylor’s era. In fact, it relies on it. If the past is examined through a microscope, then the present must be as well, and that would create cognitive dissonance.”

But the (blue-eyed) devil is not just in the details. Kimberley’s book also paints a picture of the overall sweep of events over the last 230+ years.

After the famous Founding Fathers, the presidents of the 1800s are little known, and even unheard of, except for Lincoln and maybe Grant. But as Kimberley demonstrates, every single one—regardless of party—actively upheld white supremacy in the US. Before the civil war, all of them were in favor of keeping the institution of slavery. Afterwards, they were united in their efforts to keep blacks powerless through disenfranchisement, segregation, and lynching.

Speaking about conditions at the turn of the century, Kimberley says:

“The Democrats were the party of open and proud white supremacy, and Republicans were considered the only reasonable option in the face of lynch law terrorism. This pattern of promising support that never materialized would recur into the twenty-first century. The effort to pass an anti-lynching bill foundered and was equally unsuccessful for the next five decades. Presidents may have sought black votes, but the support of black voters never mattered very much when action was needed to protect their lives” [my emphasis].

If some progress can be said to have been made by the Civil Rights movement of the ’50s and ’60s, it must also be admitted that, starting no later than Reagan, a strong counter-offensive gained traction against it, imposed top-down from 1600 Pennsylvania Avenue. Clinton’s contribution was “ending welfare as we know it” and his “crime bill,” which were both anti-black and brown, and which could only have been passed in a Democrat-controlled Congress by a Democrat president. He and his “two for the price of one” wife have never been properly condemned for these (and other) abhorrent policies. Both Bushes, before and after Bill, were racists, despite W’s “diverse” cabinet. For being the first black president, Obama had to put in special effort to prove he wasn’t going to rock the white boat; at his speech on the anniversary of the March on Washington, he “gave a very good standup impression of a racist white man,” to quote the Black Agenda Report’s Glen Ford. And not for nothing did the Black Lives Matter movement flare up under his watch.

On the subject of Obama, Kimberley explained:

“The rules for being a ‘serious’ candidate go something like this: Don’t make rich people angry. Don’t make white people angry. Don’t appear to help black people in any way, because that gets white people angrier than just about anything else. Obama knew this, but he was also instinctively a conservative man, which said to anyone who was really paying attention. During his first campaign in 2008 he spoke lovingly of Ronald Reagan as a ‘transformative’ public figure.”

“Transformative” is one way to describe “the Gipper.” Another would be as an unrepentant bigot. 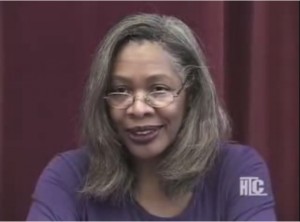 The formidable Margaret Kimberley. One of America’s leading (but almost unknown) public intellectuals.

As Kimberley illustrates, the history of the US is very much the history of white supremacy, pivoting on slavery and its aftermath. Every president from the beginning has either been a southerner defending southern racism or a northerner afraid to challenge it for fear of losing southern votes (all the while denying northern racism). We have not escaped this yet. Thanks to gerrymandering and widespread voter suppression, this country is still being run by a minority made up of white racists from the South, along with their unholy allies in the West and Midwest. The gutting of the Voting Rights Act in 2013—under the watch of a president who was a lawyer of constitutional law—has not received the attention or remedy it deserves.

Trump is the last president that Kimberley describes and she ends with this:

“Trump is no anomaly. He appears at the recent end of a continuum that began with a series of slaveholders… While Trump’s demeanor makes him seem like an outlier, history proves that he is not.”

After reading this book and reflecting on the tenacity of institutional and cultural racism in the United States, one might be tempted to say, “the more things change, the more they stay the same.” One could also draw inspiration from the movements and figures who have been righteously resisting this whole time. They are the real heroes in our history: the ones in the streets, churches and squares—certainly not any of the men who have ruled from the White House. 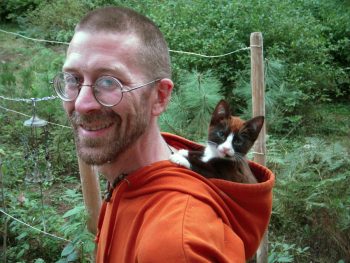 Kollibri with little friend Sylvio, in his hood.

Kollibri terre Sonnenblume is a writer, photographer, tree hugger, animal lover, and dissident. Past experiences include urban bike farmer, Indymedia activist, and music critic. Kollibri holds a BA in “Writing Fiction & Non-fiction” from the St. Olaf Paracollege in Northfield, Minnesota.   Kollibri is the author of Never Trust Anyone Who Doesn’t Like Cats, Roadtripping at the end of the world, and other books.

US puppet Guaido given a “people’s welcome” in Venezuela. Many Venezuelans are not fooled.