May 27, 2020
Please make sure these dispatches reach as many readers as possible. Share with kin, friends and workmates and ask them to do likewise. 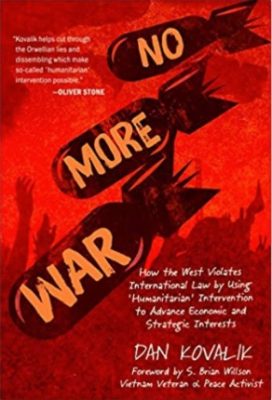 In an era where a man like Julian Assange can be mercilessly persecuted for just doing honest journalism, it takes a great deal of courage to expose the lies and misdeeds of America’s imperial ambitions. Yet they must be exposed and condemned for exactly what they have been and continue to be. No More War: How the West Violates International Law by Using ‘Humanitarian’ Intervention to Advance Economic and Strategic Interests is a book that goes the extra mile in doing just that.

As with all of his excellent books, Dan Kovalik has packed this readable and well-researched work with an abundance of invaluable information and insight into the imperial war machine, the imperial diplomatic and PR juggernaut, the extensive predatory machinations reducing the rest of the world to rubble so that America’s corporations and its ravenous banking system can subjugate and exploit their populations and extract their material wealth.

We citizens, under the spell of the Western propaganda machine, slog through the malaise of censored news, disinformation and deceptions with our eyes wide shut, preferring to avoid at all costs acknowledging the nefarious role our “exceptional” nation plays in perpetrating some of the most sordid war crimes in history, thereby propagating unfathomable misery across the planet.

Though we might prefer to immerse ourselves in the bliss of this willful ignorance, as the folks who fund such misadventures with our tax dollars, and who implicitly support it by raising no serious objections, much less mounting actual resistance, we are ourselves responsible. We are culpable. We share the guilt of those actively engineering and promoting this tsunami of death and destruction, a reign of terror inflicted on any nation who would dare stand in our path of full-spectrum dominance and self-serving plunder.

How is it “we the people” are rendered so indifferent to these acts of aggression?

But as Kovalik proves beyond any doubt, for seven decades, our wars of aggression and fostering regime change around the globe have had nothing to do with the tragically laughable “cover story” that the U.S. is spreading democracy and protecting human rights, but rather are the direct, predictable, and inevitable product of America’s obsessive fixation on world conquest and unchallengeable global domination.

No More War covers a lot of ground, looking in detail at Congo, Rwanda, Uganda, Afghanistan, Syria, Libya, Bolivia, Venezuela, Cuba, Nicaragua, the NATO aggression against former Yugoslavia, the Vietnam War.  We see 1) how disruptive and counterproductive U.S. meddling in such countries is, 2) how such interference in the affairs of sovereign nations contravenes both currently accepted norms and international law, 3) how this abuse of military prowess is rapidly overextending U.S. projection of power, 4) how it is making America a pariah in the world community, and 5) how this will ultimately result in a major confrontation with countries like Russia and China, two nuclear-armed nations which genuinely have assumed the higher moral ground in the world of geopolitics. Dan Kovalik also eloquently exposes the profound hypocrisy of the U.S. claiming to be standing up for human and political rights in other countries, as it ignores and violates within its own borders many of those same rights for its own citizens.

No More War is a powerful, informative book. While the well-crafted prose reads comfortably, conferring it with NYT best seller potential, its erudition demands that it be taken seriously. This invaluable volume begs to be used as a textbook for university peace study courses. For we can’t very well chart the right course without fully understanding where we’ve gone wrong . . . so very very wrong.

No More War: How the West Violates International Law by Using ‘Humanitarian’ Intervention to Advance Economic and Strategic Interests

John Rachel has a B. A. in Philosophy, has traveled extensively, is a songwriter, music producer, novelist, and evolutionary humanist.  Since 2008, when he first embarked on his career as a novelist, he has had 8 fiction and 3 non-fiction books published.  The three non-fiction works were political, his attempt to address the crisis of democracy and pandemic corruption in the governing institutions of America.