The Boy And The Starfish And The Yawning Chasm Of Infinity

Wherein Caity plumbs the mysteries of the capriciously mysterious universe, and its apparent amoral judgments 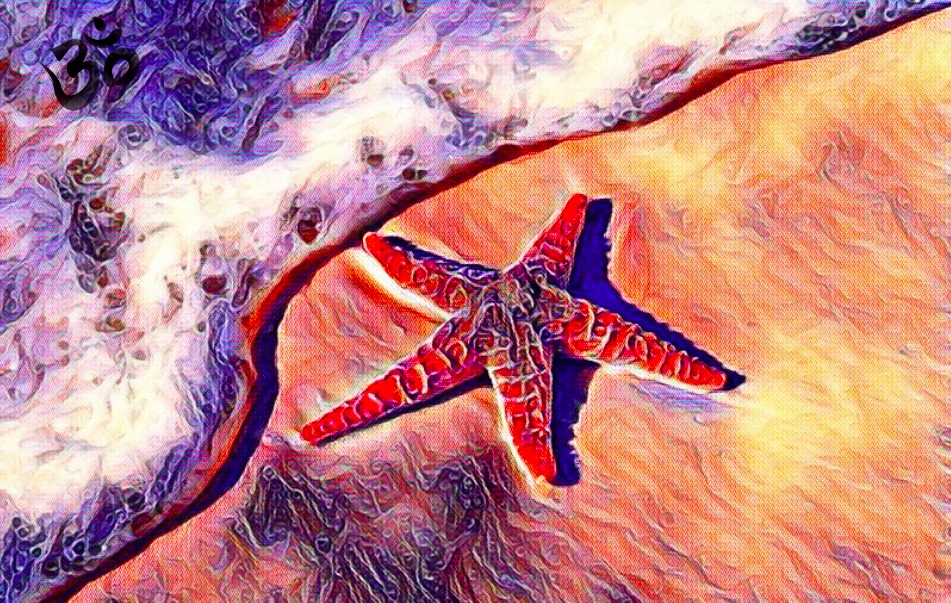 Listen to a reading of this story.

Going Rogue With Caitlin Johnstone · The Boy And The Starfish And The Yawning Chasm Of Infinity
Aman walking along the beach came upon a boy picking up starfish and throwing them into the water.

"What are you doing?" the man asked him.

"I'm throwing these starfish back into the sea," the boy answered. "The tide's gone out and they'll cook in the sun if I don't help them."

"But there are miles and miles of beach and countless starfish in every mile," said the man. "You can't possibly make any difference!"

The boy listened politely, then picked up another starfish and tossed it into the surf.

"Made a difference to that one," he said to the man.

"I mean that's a cute answer and all," said the man. "It would fit nicely in a Facebook meme shared by your religious aunty, or a motivational speech from the early nineties. But in the grand scheme of things you must surely understand that saving that one starfish is of no real significance? The tide will go out again tomorrow, and this beach will once again be lined with dying starfish just as it is now, among them quite likely our little friend you just rescued."

"What do you want me to say man?" the boy replied, his tone suddenly changing. "That there's some kind of eternally ordained metaphysical justification for my actions here on this beach today? That there's some absolute truth inscribed upon the fabric of reality from on high saying 'One saved starfish equals one Ultimate Meaningfulness?' On what basis are you premising your assumption that any actions have any meaning or purpose at all?"

The boy began to grow larger, and as he spoke his skin turned an otherworldly shade of blue.

"Do you have any idea how vast the universe is? How ancient it is? How ephemeral it is?" asked the boy. "How can you claim to take any action that makes any ultimate difference whatsoever when you and everything you've ever known is nothing but an infinitely small blip in the middle of a yawning expanse of infinity?"

A second pair of blue arms sprouted from the boy's torso. His voice thundered as he towered over the man.

"Who am I?? Who are you?" the boy responded. "Who do you think you are exactly? Who are you to go around proclaiming what actions possess significance and which do not? You've been around, what? Sixty years? You're a zygote. You're a fruit fly. The very thing you think of as yourself is no more substantial than a wisp of sea foam, and as far as the universe is concerned you have essentially the same lifespan. You're nothing but a loosely associated cloud of cells swirling around for a short time in inseparable interplay with the ecosystem which birthed it on a tiny planet in the outer periphery of a galaxy which in the grand scheme of things is scarcely older than you are. You're a little eddie twirling in the middle of the ocean for a single instant, and you presume yourself so wise and authoritative that you can pass out decrees on the meaningfulness of the life of a starfish? You presume yourself any more important or significant than any one of these starfish on the sand?"

"I'm sorry!" the man said, falling to his knees in terror. "I meant no offense!"

The world fell away as the boy's hulking frame came apart and transformed into billions of galaxies spinning against a backdrop of infinite blackness.

"The universe expands and contracts within me like the air in your lungs," the boy said. "Each Big Bang in every universe unleashes a new dance of swirling energy which turns into increasingly complex iterations of matter as it expands, it achieves peaks of dazzling beauty the likes of which your young primate mind cannot even imagine, then it grows cold and collapses in on itself once again. Again and again I birth infinite universes into existence; they bloom and die within me like flowers in the illusory appearance of time. Not one of those universes ever matters. Not one of them ever makes any ultimate difference. The life of a single starfish has the same net worth as the entire lifespan of this entire universe."

"Then why bother?" asked the man, suddenly finding some courage. "If nothing means anything and nothing matters, why create any of this?"

"Same reason I sometimes throw starfish back into the ocean," said the boy.

"You were married, yes?" the boy asked in response.

"Ever do nice things for her?"

"Why... because I loved her. There was no other reason."

"You love all these universes you create?"

"That's not how love works, man. Love doesn't seek to dominate or control. Real love loves everything just as it is, however it shows up. You loved your wife just as much when her body was racked with cancer as you did the day you were married, even when she was rail thin and had trouble staying awake because of the morphine. Real love doesn't reject what is; it's a deep and unconditional yes. And of course that yes can include surgery and chemotherapy. It can also include throwing starfish back into the sea. But the yes is always there, if you can get past all the head noise and notice it."

The man blinked back tears and looked away. "It really, really hurts sometimes."

"Yes," said the boy. "From every Big Bang there emerge movements of every possible form. These movements can include pain. And cancer. They can also include serial killers, ecocide, oligarchs and warmongers. These things are all part of the swirling ongoing explosion of this universe. They're all little curlicues in the movement of its energy, just like sea foam on the waves. And they are all fully, entirely beloved, just as they are. No part of the cosmic dance is rejected. Every part is embraced. And when it all goes, that going is embraced as well, and so is the pain of the loss."

"Dammit man, have you not listened to a word I just said?" asked the boy. "Either be a lover of life or don't. Either throw yourself into gratuitous acts of love or don't. It doesn't matter either way. Your every molecule is perfectly beloved no matter what you do. You know what it is to love a woman, and you can learn what it is to love life if you want. Up to you."

"I... was going to throw myself off the seacliff. That's where I was headed."

"You still can if you want to."

The world reappeared. The boy stood before the man, his normal boy size, with the normal boy number of arms.

The boy looked deep into the man's eyes and placed his hand on his chest, then turned and went back to throwing starfish into the waves.

The man watched the boy work, then turned his eyes to the seacliff in the distance, then back again to the boy.

"Ehh, low tide anyway" said the man, bending over to pick up a starfish.