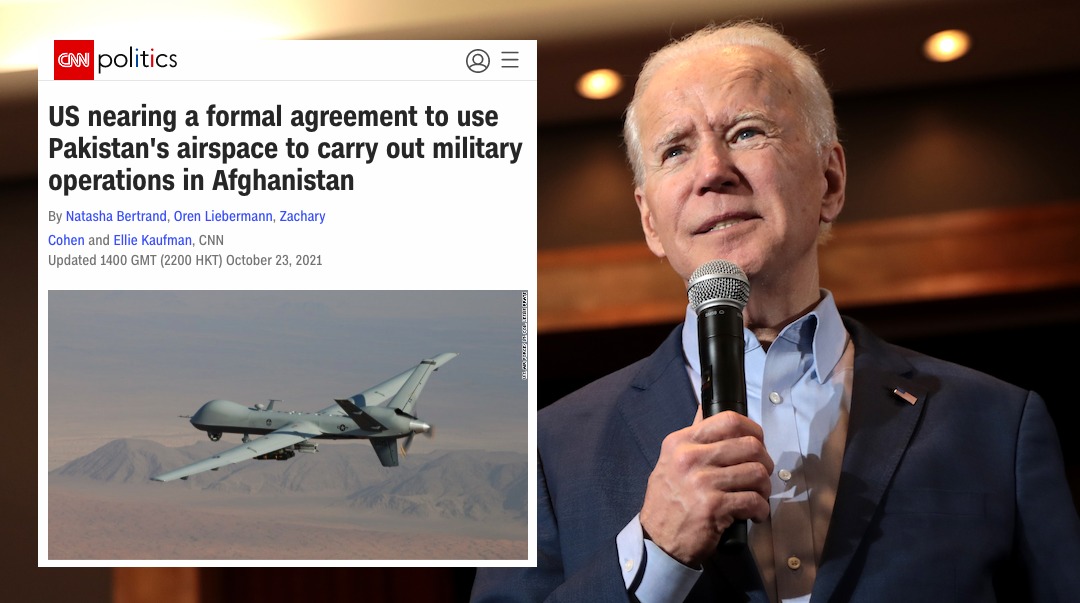 The US government is reportedly close to securing a deal with Pakistan that will ensure its ability to continue military and intelligence operations in Afghanistan, the nation where the Biden administration proudly “ended” a decades-long war.

“The Biden administration has told lawmakers that the US is nearing a formalized agreement with Pakistan for use of its airspace to conduct military and intelligence operations in Afghanistan, according to three sources familiar with the details of a classified briefing with members of Congress that took place on Friday morning,” reads a new report from CNN.

“The briefing comes as the White House is still trying to ensure that it can carry out counterterrorism operations against ISIS-K and other adversaries in Afghanistan now that there is no longer a US presence on the ground for the first time in two decades after the NATO withdrawal from the country,” the report reads.
[Leave it to Pakistan to collaborate once again with the criminal empire.]

The Biden administration has told lawmakers that the US is nearing a formalized agreement with Pakistan for use of its airspace to conduct military and intelligence operations in Afghanistan, sources say https://t.co/GVhXajXE6Q

So as has been obvious for months the US empire will still be retaining military control over a key geostrategic region adjacent to Iran and China, will still be enriching the military-industrial complex by raining explosives upon human beings on Afghan soil, and will still be continuing George W Bush’s “war on terror” scam. It just won’t come with the bad cosmetics of maintaining a ground troop presence.

After all the Biden administration’s proud self-fellating fanfare for “ending” this war, it turns out it was nothing more than a slight formatting adjustment.

As we discussed after Biden took office, this is the modern model of US warfare; a de-emphasis on Bush-era Hulk Smash ground invasions in favor of drone warfare, missile strikes, starvation sanctions, proxy wars, staged coups, special ops, and cold war maneuverings. Constant footage of flag-draped coffins coming home during Bush’s wars caused a PR nightmare for the empire from which it still hasn’t fully recovered, but technological and strategic advancements has made such bad publicity largely a thing of the past. Troops deployed overseas are now far more likely to die by their own hand than by combat.

The goal of the empire is to be able to topple governments and dominate the globe without incurring a negative perception among the inhabitants of the US and its client states. It has been doing this with a combination of (A) shifting to more “light touch” interventionism which doesn’t garner as much negative attention as full-scale ground invasions and (B) a global perception management campaignof historically unprecedented scale and sophistication.

Ideally the imperialists want to be able to dominate the planet with economic sanctions and the occasional strategic drone strike combined with mass-scale psychological manipulation. It is not a coincidence that nations where they are unable to do these things at will are the nations we are most aggressively propagandized against.

The empire isn’t getting less tyrannical, it’s just getting better at public relations. The need for critical thinking and alternative perspectives has never been higher.

The Boy And The Starfish And The Yawning Chasm Of Infinity