August 2, 2022 9 minutes read
Please make sure these dispatches reach as many readers as possible. Share with kin, friends and workmates and ask them to do likewise. 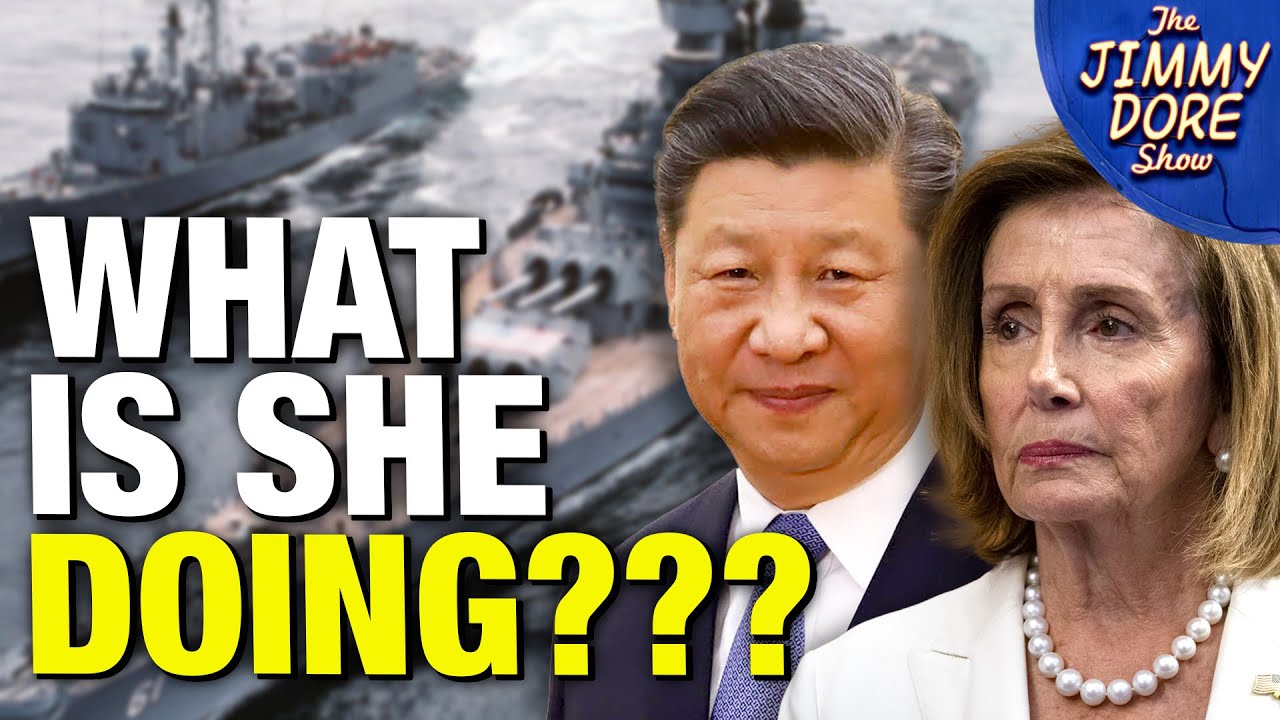 The Jimmy Dore Show
As Nancy Pelosi plots her “Will she or won’t she?” visit to the Far East that may involve a stopover in Taiwan, the U.S. Navy is engaging in aggressive maneuvers in the Taiwan Strait and China is warning the U.S. that these are all provocative moves that will not be idly tolerated by the region’s top power. So what’s the objective here? To distract from Democrats’ domestic woes? For Pelosi to review her investment in Taiwanese semiconductors? To pointlessly edge ever closer to nuclear war? Who knows? Jimmy and his panel of The Dive’s Jackson Hinkle and America’s comedian Kurt Metzger discuss the dangerous game of brinksmanship tug-of-war currently underway over Taiwan.

A report by Reuters presents the imperial point of view. We have bolded red the words and passages that appear most deceptive, arrogant, tendentious, or provocative. 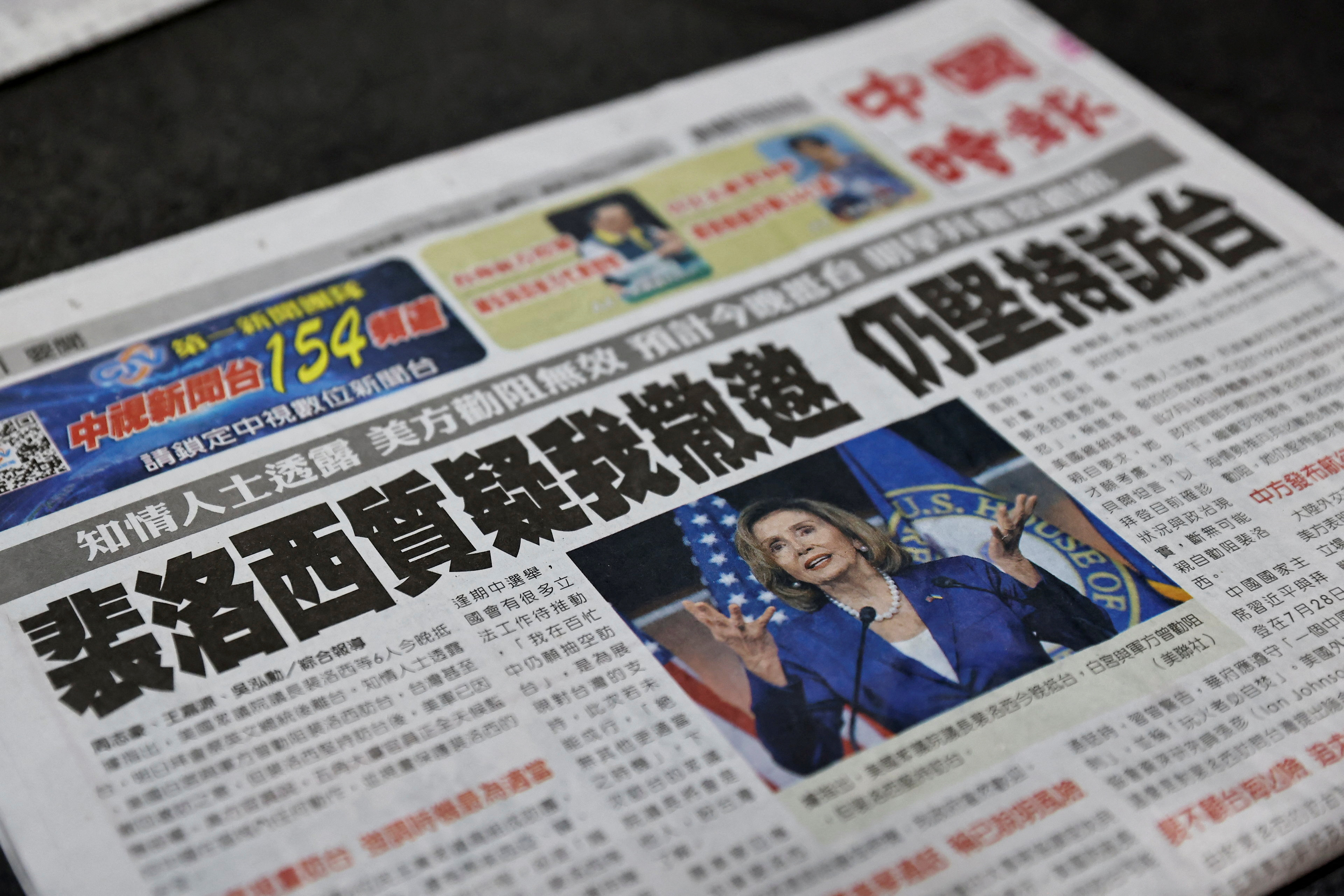 TAIPEI, Aug 2 (Reuters) - U.S. House of Representatives Speaker Nancy Pelosi arrived in Taiwan late on Tuesday on a trip she said was intended to express American solidarity with the Chinese-claimed island, the first such visit in 25 years and one that risks pushing relations between Washington and Beijing to a new low.

Pelosi and her delegation disembarked from a U.S. Air Force transport plane at Songshan Airport in downtown Taipei and were greeted by Taiwan's foreign minister, Joseph Wu and Sandra Oudkirk, the top U.S. representative in Taiwan.

"Our congressional delegation's visit to Taiwan honors America's unwavering commitment to supporting Taiwan's vibrant democracy," Pelosi said in a statement shortly after landing. "America's solidarity with the 23 million people of Taiwan is more important today than ever, as the world faces a choice between autocracy and democracy."

China immediately condemned Pelosi's visit, with the foreign ministry saying it seriously damages peace and stability in the Taiwan Strait, "has a severe impact on the political foundation of China-U.S. relations, and seriously infringes upon China's sovereignty and territorial integrity." The ministry said it had lodged a strong protest with the United States.

Chinese warplanes buzzed the line dividing the Taiwan Strait on Tuesday before her arrival, and Chinese state media said the People's Liberation Army would hold exercises near Taiwan from Thursday through Sunday.

Pelosi, who is second [actually third] in the line of succession to the U.S. presidency and a long-time critic of Beijing, was on a tour of Asia that includes announced visits to Singapore, Malaysia, South Korea and Japan. Her stop in Taiwan had not been announced but had been widely anticipated.

In a Washington Post opinion piece released shortly after she landed, Pelosi outlined her reasons for visiting, praising Taiwan's commitment to democratic government while criticizing China as having dramatically increased tensions with Taiwan in recent years.

"We cannot stand by as the CCP proceeds to threaten Taiwan - and democracy itself," Pelosi said, referring to the Chinese Communist Party.

Pelosi also cited China's "brutal crackdown" against political dissent in Hong Kong, as well as its treatment of Muslim Uighurs and other minorities, which the United States has deemed genocide.

Chinese Foreign Minister Wang Yi said earlier on Tuesday that U.S. politicians who "play with fire" on the Taiwan issue will "come to no good end".

White House national security spokesperson John Kirby said after Pelosi's arrival that the United States "is not going to be intimidated" by threats or bellicose rhetoric from China. Kirby said the visit is not a violation of either any sovereignty issues or America's longstanding "one-China policy."

"There's no reason for this visit to become a spurring event for a crisis or conflict," Kirby added.

Taiwan's presidential office said President Tsai Ing-wen will meet with Pelosi on Wednesday morning and would have lunch with her. Four sources said she was also scheduled on Wednesday afternoon to meet a group of activists who are outspoken about China's human rights record.

Pelosi, 82, is a close ally of U.S. President Joe Biden, both being members of the Democratic Party, and has been a key figure in guiding his legislative agenda through the U.S. Congress.

With tensions already high, several Chinese warplanes flew close to the median line dividing the Taiwan Strait on Tuesday morning before leaving later in the day, a source told Reuters. Several Chinese warships have also sailed near the unofficial dividing line since Monday and remained there, the source said.

The Chinese aircraft repeatedly conducted tactical moves of briefly "touching" the median line and circling back to the other side of the strait while Taiwanese aircraft were on standby nearby, the person said.

It was operating with the guided missile cruiser USS Antietam and destroyer USS Higgins, with the amphibious assault ship USS Tripoli also in the area.

Since last week, China's PLA has conducted various exercises, including live-fire drills, in the South China Sea, Yellow Sea and Bohai Sea, in a show of Chinese military might.

China views visits by U.S. officials to Taiwan as sending an encouraging signal to the pro-independence camp on the democratic, self-governed island. Beijing considers Taiwan to be part of its territory and has never renounced using force to bring the island under its control. Taiwan rejects China's sovereignty claims and says only its people can decide the island's future.

The United States has no official diplomatic relations with Taiwan but is bound by American law to provide the island with the means to defend itself.

Russia - itself locked in a confrontation with the West over its invasion of Ukraine - also chimed in on Pelosi's expected visit. Maria Zakharova, Russia's foreign ministry spokeswoman, said the visit was a provocative U.S. attempt to pile pressure on China, a country with which Russia has forged a strong partnership in recent years.

"The USA is a state provocateur," Zakharova said. "Russia confirms the principle of 'one China' and opposes the independence of the island in any form."

Earlier on Tuesday, Pelosi visited Malaysia, having begun her Asia tour in Singapore on Monday. Her office said she would also go to South Korea and Japan but made no mention of a Taiwan visit.

Taiwan's Defence Ministry said it had a full grasp of military activities near Taiwan and that it would dispatch forces appropriately in reaction to "enemy threats".

China's defence and foreign ministries did not respond to requests for comment.

In the southeastern Chinese city of Xiamen, which lies opposite Taiwan and has a large military presence, residents reported sightings of armoured vehicles.

During a phone call last Thursday, Chinese President Xi Jinping warned Biden that Washington should abide by the one-China principle and "those who play with fire will perish by it". Biden told Xi that U.S. policy on Taiwan had not changed and that Washington strongly opposes unilateral efforts to change the status quo or undermine peace and stability across the Taiwan Strait.

Bonnie Glaser, a Taiwan expert at the German Marshall Fund of the United States, told reporters in a call that the damage to American-Chinese relations done by the Pelosi visit would be hard to repair.

"We all know how bad this relationship has been in the past year. And I just think that this visit by Nancy Pelosi is just going to take it to a new low," Glaser said. "And I think that it's going to be very difficult to recover from that."

Reporting by Yimou Lee and Sarah Wu; Additional reporting by Fabian Hamacher in Taipei, Yew Lun Tian in Beijing and Patricia Zengerle in Washington; Writing by Tony Munroe and Michael Martina; Editing by Angus MacSwan, Will Dunham and Mark Heinrich