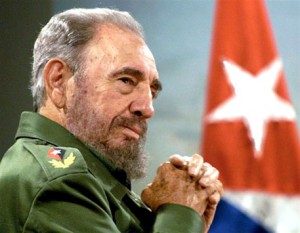 In 1959, Fidel Alejandro Castro Ruz liberated Cuba from imperial America, police state rule, and mafia bosses who turned the nation into a casino and brothel.

On August 13, Fidel turns 86. After leading Cuba for decades, surviving hundreds of US attempts to kill him, a punishing embargo, and numerous other hostile acts, illness forced him to step down in December 2008.

It didn’t slow his determination to speak and write vital truths, especially on issues of war and peace.

Like others, including this writer, he justifiably fears inevitable disastrous war.

His latest article explains headlined, “The roads leading to disaster.”

Fidel’s intellect remains acute, his perceptiveness keen. His knowledge of vital issues is impressive. His honesty and integrity are impeccable, his forthrightness noteworthy. So is his fear about an inevitable disaster.

“As far as I am concerned,” he said, “I do not harbor the slightest doubt that the United States is about to commit, and lead the world toward, the greatest error in its history.”

“When they launch war, they’re going to launch it there. It cannot help but be nuclear. I believe the danger of war is growing a lot. They are playing with fire.”

Indeed so he explained in his August 24, 2010 article headlined, “The nuclear winter,” saying:

He expressed surprise about learning that “we do not need a nuclear world war for our species to perish.” A nuclear conflict between any two nations can do it.

“A nuclear war is inevitable,” he added. It could happen “when the first Iranian vessel is inspected” or by any other trigger. Washington wants regime change. So does Israel. All means will be employed to achieve it, including the unthinkable – nuclear war.

In his latest article, Castro said:

“Does anyone think that the United States will be capable of acting with the independence that could preserve it from the inevitable disaster awaiting it?”

Does anyone believe Democrats or Republicans differ, especially on relentlessly advancing America’s imperium for unchallenged global dominance, and choosing war to achieve it.

“It is really extraordinary to observe a nation so powerful technologically and a government so bereft of both ideas and moral values.”

Iran threatens no one. Washington and Israel know its nuclear program is peaceful. It complies fully with Nuclear Non-Proliferation (NPT) provisions. Even having nuclear or any other destructive weapons doesn’t imply intent to use them.

In contrast, America is nuclear armed and dangerous. So is Israel. Advancing its own imperium, it “declared its intention to attack and destroy Iran’s nuclear fuel production facilities.”

“The Israeli government has openly declared its intention to attack the enriched uranium production plant in Iran, and the government of the United States has invested hundreds of millions of dollars in manufacturing a bomb for that purpose.”

“Imagine United States (and/or Israeli) forces dropping monstrous bombs, capable of penetrating 60 meters of cement, on industrial facilities. Never before has such an adventure been conceived.”

It’s vital to understand “the seriousness” of doing it, he said. Humanity “will be led inexorably toward disaster.” If simple truths aren’t understood, survival’s impossible.

If Mother of all Bombs (MOB) are used like king-sized hand grenades, can human extinction be far behind, or at least face tens of millions of lives lost, multiples more condemned to slow, painful death, and countless others from disease.

AIPAC lobbies aggressively for war on Iran. It spuriously calls the Islamic republic “the world’s leading state sponsor of terror and is racing toward a nuclear weapons capability.”

“Through its proxy armies of Hizballah in Southern Lebanon, Hamas in the Gaza Strip and insurgents in Iraq and Afghanistan, the Iranian regime is supporting terrorists carrying out daily attacks on American troops and Israeli civilians.”

“The only way to stop them is to destroy the Iranian regime, the mullahs, and that can only be accomplished through war.”

Blatant misreporting, deliberate lies, and fearmongering define America’s print and broadcast media. News anchors and reporters claim Iran may be planning a strike on US soil. The very notion’s preposterous.

Others demand it give up what doesn’t exist and endorse war as the price for refusal. Former Bush administration official/now regular Fox News contributor, and member of America’s lunatic fringe John Bolton calls sanctions “half measures doomed to fail” and favors war, saying:

He’s not alone. Viewers and readers get steady warmongering propaganda. It replicates the run-up to attacking Iraq in 2003 based on spurious WMD hype. It was repeated against Libya based on falsified reports and willful lies.

At all times, public sentiment’s influenced. People are manipulated to support war. They do unwittingly not knowing they’re lied to. It happens no matter how previous many times they later learned they were fooled.

In a recent column, the Washington Post’s resident zealot (and regular Fox News contributor), Charles Krauthhammer outrageously called Iran “the world’s greatest exporter of terror, the systematic killer of Americans in Iraq and Afghanistan, the self-declared enemy that invented ‘Death to America Day,’ ” and soon to have “nuclear capability.”

Claiming Israel’s “threatened with annihilation,” he favors war as the way to prevent it, despite no threat whatever existing.

The New York Times regularly features pro-war advocates like former Israeli intelligence head Amos Yadlin. He used it to claim Israel faces an existential threat of annihilation and must act preemptively against it.

Whether or not Obama agrees, “Israeli leaders may well choose to act while they still can.”

In June 2009, pro-Israeli ideologues prepared a Brookings Institution policy paper titled, “Which Path to Persia? Options for a New American Strategy Toward Iran.” It openly endorsed regime change, including by air strikes, invasion, and/or encouraging Israel to attack.

A recent International Crisis Group (ICG) report was more measured. Titled, “In Heavy Waters: Iran’s Nuclear Program, the Risk of War and Lessons from Turkey,” it favors giving diplomacy a chance to convince Iran to give up its legitimate nuclear program, then consider other options if fail. ICG implied but stopped short of endorsing war.

Scoundrel media’s common theme is Iran’s alleged existential threat. Decisive action to prevent it is vital. Failure poses unacceptable risks. War’s the last option, but important to wage if others fail to convince Iran to give up what it doesn’t have and has no intention of pursuing.

Castro’s right warning of inevitable disaster, and saying he has no doubt it’s coming. Given America’s rage for war, forewarned is forearmed for essential grassroots action.

Nothing else potentially can stop what no one should tolerate, given stakes able to threaten humanity. If that’s not incentive enough, what is?

OpEds: ALEC/Koch Cabal Pushing Privatization of the US Postal Service for UPS and FedEx…