A DISPATCH FROM RT.COM 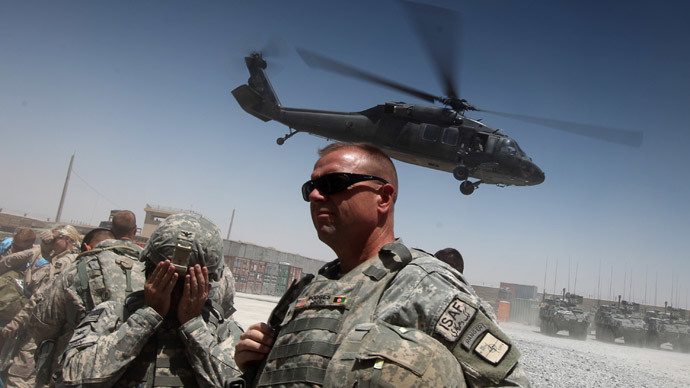 [dropcap]U[/dropcap]S army commander in Europe says Russia is a “real threat” urging NATO to stay united. The alliance is not interested in a “fair fight with anyone” and wants to have “overmatch in all systems,” Lieutenant-General Frederick “Ben” Hodges believes.

“There is a Russian threat,” Hodges told the Telegraph, maintaining that Russia is involved in ongoing conflict in eastern Ukraine. A key objective for NATO is not to let Russia outreach it in terms of capabilities, the general said.

“We’re not interested in a fair fight with anyone,” General Hodges stated. “We want to have overmatch in all systems. I don’t think that we’ve fallen behind but Russia has closed the gap in certain capabilities. We don’t want them to close that gap,” he revealed.

“The best insurance we have against a showdown is that NATO stands together,” he said, pointing to recent moves by traditionally neutral Sweden and Finland to cooperate more closely on defense with NATO.

[pullquote]The US military doesn’t like an even playing field. They prefer overwhelming power or nothing. Sometimes they are irritated that the enemy should even have the audacity to shoot back. This attitude was seen frequently among pilots flying over Vietnam. Gen. Hodges is at least honest about it. [/pullquote]

Moscow has expressed “special concern” over Finnish and Swedish moves towards the alliance viewing it as a threat aimed against Russia.

“Contrary to past years, Northern European military cooperation is now positioning itself against Russia. This can undermine positive constructive cooperation,” Russia’s Foreign Ministry said in a statement. 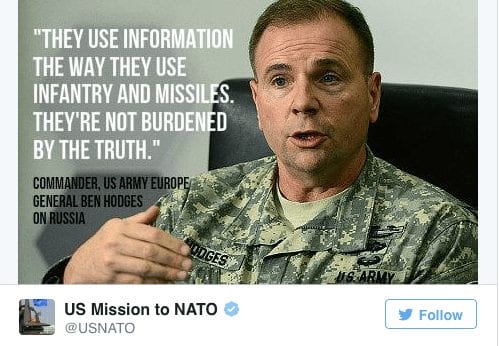 Laugh if you like, but Gen Hodges‘ beliefs mirror perfectly the utmost untruths peddled by the official US propaganda playbook, including the idea that it is the Russians, and not the Americans, who specialize in the Big Lie.

Hodges also said US expects its allies to contribute financially to the security umbrella provided by the NATO alliance, as its member states have been failing to allocate 2 percent of every member nation’s GDP to NATO budget.

“I think the question for each country to ask is: are they security consumers or security providers?” the general demanded. “Do they bring capabilities the alliance needs?”

However, the general does not believe that the world is on the brink of another Cold War, saying that “the only thing that is similar now is that Russia and NATO have different views about what the security environment in Europe should be.”

“I don’t think it’s the same as the Cold War,” he said, recalling “gigantic forces” and “large numbers of nuclear weapons” implemented in Europe a quarter of a century ago. “That [Cold War] was a different situation.”

“We did very specific things then that are no longer relevant. We don’t need 300,000 soldiers in Europe. Nobody can afford that anymore,” General Hodges acknowledged.

However, there was a sharp increase in the intensity of the training of NATO troops near the borders of Russia last year, Russian General Staff reported.

“In 2014, the intensity of NATO’s operational and combat training activities has grown by 80 percent,”said Lieutenant General Andrey Kartapolov, head of the Main Operation Directorate of General Staff.

Useful idiots and the limits of propaganda