Special to The Greanville Post | Commentary No. 25: “Fascism in the 21st Century: Part II, A 21st Century Adaptation”

As I said in beginning the first column in this series, “fascism” is a term we hear from all sorts of folk these days, ranging from some of those on the Left over occasionally to some on the Right.  I then presented a “classical” definition of the term (and there surely are a number of useful ones):

Fascism has almost always appeared in advanced or moderately-advanced capitalist countries which were hitherto ruled by some sort of “parliamentary democracy.”   Fascism has always been imposed upon a country by the dominant sectors of its capitalist ruling class when that class has come to the conclusion that it can no longer retain control of the political economy through “parliamentary” means.  Note that in the definition above I did not include as part of it the ultimate control of state power by one person, usually known as the “dictator” or “leader”.   Of course it happened that in the two principal 20th century examples of fascist states, Nazi Germany and Fascist Italy, there was one such person.  As noted in the first column in this series: 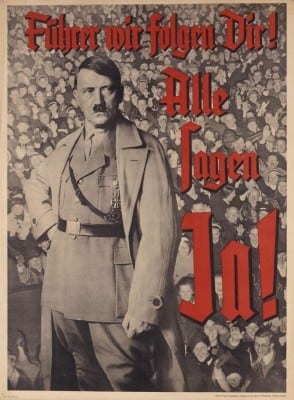 “Because of the roles that Hitler and Mussolini played in leading and ruling their respective countries it is often thought that fascism requires such a singular leader/dictator and the cult-of-personality that was built around each.  In fact Hitler and Mussolini both adopted the term ‘leader’ to describe themselves, ‘führer’ in German and ‘Duce’ in Italian.”

Very strong cults of personality were carefully built around the two men by their respective propaganda apparatuses. For example, after 1938 or so, in Nazi Germany if one did not substitute “Heil Hitler” for the usual “Good Morning,” etc. throughout the day, one might be looked upon with suspicion.  Furthermore, a singular characteristic of 20th fascism was that its institutionalization in a given country was accomplished by the use of violence, of one form or another.

When we are looking at 21st century fascism, in the context of what is happening in certain of the capitalist states, at the present particularly in the United States, it should be noted that it is entirely possible that wholesale violence will not be required for its introduction.  Nor will a maximum leader necessarily be required.  Like the fog in the famous, ultra-short poem by the U.S. person Carl Sandburg, it may well come in “on little cat feet.”

As the history of the last 150 years or so shows us, in most capitalist countries the ruling class would much rather retain its private ownership of the means of production and control of the State apparatus through the aforementioned form of “parliamentary democracy” (as long as it can control it).  There are a variety of reasons for this, one being that it maintains the fiction that the non-owning classes have some real say in the governance of the economy as well as of the State.

But the principal contradictions of capitalism eventually begin to settle in, as is happening right before our very eyes in the United States: the export of capital and the resulting de-industrialization; the declining rate of profit, the necessity of the creation and expansion into unorthodox profit centers like prisons and the educational system; increasing numbers of workers languishing outside of the labor market, and so on and so forth.  Under such conditions—all inherent in capitalism’s dynamics—it becomes less-and-less easy for the ruling class to maintain control.  At that point, some sort of fascism starts to become ever more attractive.  But how to get from A to B?  In a nation like the United States, with Constitutionally-split government authority, that’s easy: through the Constitution.  And so, in the 21st century, in the United States at least, I believe we will eventually arrive at what can be called Constitutional Fascism. 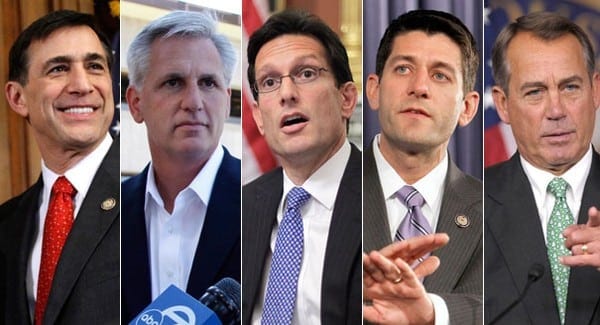 Prominent Repubs in 2015: they lead the charge toward “constitutional fascism” with little or no opposition. Who needs goons in the streets? Hitler would be envious.

[dropcap]U[/dropcap]sing the increasingly corrupt electoral system, which the Republicans have been deliberately undermining by gerrymandering, voter suppression, and outright vote-count cheating, they have been taking total control of an increasing number of state governments, upwards of 2 dozen after the 2015 elections.   For the same reasons they will control the House of Representatives for the indefinite future.  If they retain their Senate majority in 2016, they will very likely do away with the filibuster on Jan. 3, 2017.  For a variety of reasons, if they somehow manage to choose the right candidate, they could very well win the Presidency in 2016, for they have managed the very clever trick of forcing President Obama to accept many of their economic/fiscal policies and then getting to blame him for the negative outcomes of same.  Finally, the other side of the Duopoly plays right into this because the Democrats—the other face of the deep corporate state and international imperialism— rarely fight back on the real issues, the issues that matter from a class perspective.

“In the 21st century, in the United States at least…wholesale violence may not be required. Gradually, step by unnoticed step, I believe we will eventually arrive at what can be called Constitutional Fascism.”

[dropcap]S[/dropcap]o, as we have seen, in this cynical Kabuki, it is the Repubs who take the lead toward the slaughterhouse, while the Democrats simply follow, by passively assenting to most policies proposed by the “party of business.” Thus, in a systematic way, more and more, the Repubs. are running on and/or intent on implanting most of the central elements of the definition of fascism offered above, through the use of the electoral system, which they can do because A) as mentioned earlier, the limp opposition of the Democratic Party, and B) the non-existence of any sort of mass labor union movement, following the Repubs.’ successful campaign to destroy it, a process that has been going on since the passage of the Taft-Hartley Act in 1947. (Again a bipartisan project).

None of this would be so outrageously easy in the presence of a functioning, autonomous media that took its duties seriously. That, however, does not exist in the US any more, if it ever did. The American media, conceits aside, in the complete hands of the corporate plutocracy, are simply one more propaganda platform—perhaps the most effective—to bolster and disseminate the prevailing capitalist ideology.  The true left, minuscule in its media presence, forever fragmented and improvident in strategic regards, has nothing to respond with, no instruments with which to access the public debate. That is why the fascism mongers will achieve their goals “constitutionally.”  What they will do to the Constitution by amendments (that they are already talking about) once they get full control of the Supreme Court, 40 state governments, 2/3’s of the Congress, and the Presidency will then play itself out.  And the nation will have become fully fascist functionally, without violence, without a maximum leader, with, on paper two political parties offering “choice.” A perfect Orwellian democracy. 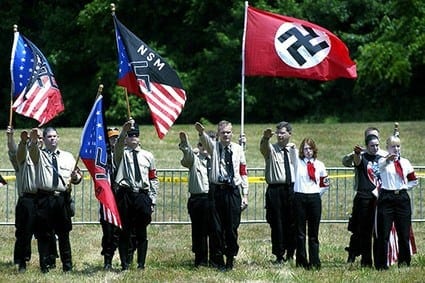 American Nazis. Not really needed, since the state will have the army and police in its pocket—and the media to cover their crimes. Still, they could be used to carry out “boutique murders” of select opposition activists.

[dropcap]I[/dropcap]f you would like to see how this may well play out, please see my book, The 15% Solution: How the Republican Religious Right Took Control of the U.S., 1981-2022 (Punto Press Publishing, 2013).  The original edition was published in 1996, and believe me I didn’t make up any of it.  “The 15% Solution” in the title comes from a voter-suppression program designed by an organization called the “Christian Coalition” in the late 1980s.  I just looked at what the Republicans and their soul-mates in the Religious Right were telling us, back into the 1980s, what they would do if they ever got significant control over the levers of government.  And they are doing it.  Indeed, as the overall economic conditions continue to worsen, and as racism, homophobia, and misogyny, all underlain by religious determinism continue to expand in their domination of Republican politics, fascism will creep in like Sandburg’s fog, on little cat feet.  But it will be a highly poisonous fog.

Francois Hollande — The World’s Most Powerful Person This Week

21st century Fascism is already here. “Racism homophobia and misogyny” are tangential to it, not its objectives. In the U.S. ” partisan ” party politics are irrelevant – democrats represent the fascist elite just as vigorously as republicans .The “Christian coalition” is a carnival sideshow. The centers of 21st century fascist power are the IMF the World bank and Global finance capital directed from Wal Street,Frankfurt Brussels, and the City of London.