Home Uncategorized The Turkish crisis and the threat of world war

The Turkish crisis and the threat of world war 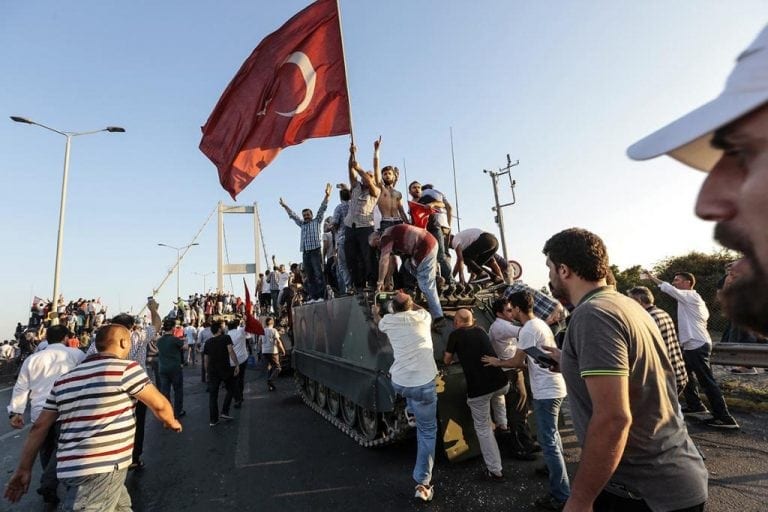 Images from the 2016 failed coup which Erdogan believes was organised with American and German support.

The Trump administration Tuesday issued a threat of a further escalation of US economic sanctions that have already tipped Turkey into an economic meltdown.

Last Friday, Washington doubled US tariffs on Turkish steel and aluminum, to 50 percent and 20 percent, respectively. The action led to a precipitous 20 percent fall in the value of the Turkish lira, which had already been declining for months, triggering a bout of inflation that has eviscerated the living standards of Turkish working people.

The pretext for the punishing attack on Washington’s erstwhile NATO ally—Turkey has the most troops of any member of the military alliance outside of the US itself—is the continued detention of the evangelical American preacher Andrew Brunson, who was arrested in 2016 on charges of complicity with the organizers of an abortive military coup in July of that year that sought the overthrow of President Recep Tayyip Erdogan.

“The administration is going to stay extremely firm on this. The president is 100 percent committed to bringing Pastor Brunson home and if we do not see actions in the next few days or a week there could be further actions taken,” a senior White House official told the Reuters news agency.

While public agitation over the fate of Brunson serves Trump’s domestic political agenda, appealing to his Christian right base, the real motives for the drive to bring the Turkish economy to its knees lie in the bid by US imperialism to shift its own crisis onto the backs of both its enemies and supposed allies by means of trade war, economic sanctions and direct military confrontation.

Trump, the American bully, is attempting to threaten and intimidate every government of the world to bow to the interests of Wall Street and the US-based transnational corporations.

The past month has seen not only the sanctions that have sunk the Turkish lira, but the imposition of new sanctions against Iran, following the unilateral US abrogation of the 2015 Iranian nuclear deal with the P5+1—the US, UK, France, China, Russia and Germany—that have led to severe strains on the Iranian economy. Far more punishing sanctions on Iranian energy exports and banking are set to kick in in November.

Similarly, sanctions are being imposed on Russia over the alleged nerve-agent poisoning of ex-Russian spy Sergei Skripal and his daughter in the British town of Salisbury. The Russian government of President Vladimir Putin has denied any involvement in the affair, and no substantive evidence has been presented to prove otherwise. As in Iran’s case, Russia faces the prospect of more sanctions being rolled out later this year.

Russian Prime Minister Dmitry Medvedev warned last Friday that proposed measures to bar Russian banking operations would “amount to a declaration of economic war” and would merit “a response with economic means, political means and, if necessary, other means.”

The attack on Turkey is bound up with the increasingly aggressive US measures being taken against Russia and Iran. The Erdogan government’s foreign policy has cut across US geostrategic aims in the Middle East and more broadly in Eurasia.

In Syria, Ankara has reached an accommodation with both Russia and Iran, allowing it to pursue its interests on its southern border. At the same time, Turkey has come to the verge of military confrontation with the US, which is utilizing as its main proxy ground force the Syrian Kurdish YPG militia, an affiliate of the Turkish Kurdish PKK against which Ankara has waged a protracted and bloody counterinsurgency campaign.

Meanwhile, the Turkish government has unveiled plans to purchase the advanced S-400 missile defense system from Russia that is supposed to be delivered next year and is incompatible with NATO antimissile systems.

Finally, Ankara has signaled that it has no intention of abiding by the unilateral sanctions being imposed by Washington against Iran, which is a principal source of Turkey’s energy imports. And, as Trump signaled in a recent tweet, “Anyone doing business with Iran will NOT be doing business with the United States.”

These same international conflicts, in particular Turkey’s turn toward closer relations with Russia and China, provided the motive for US as well as German support for the failed July 2016 military coup against Erdogan, which was launched while Obama was in the White House.

The bullyboy Trump is not some grotesque aberration, but rather the authentic face of a parasitic US ruling oligarchy that is prepared to carry out world historic crimes in pursuit of its interests.

In the case of Turkey, there are no doubt calculations in Washington that pushing the country’s crisis-ridden economy over the brink will have little direct impact upon the US. Turkey ranks 28th among foreign markets for US goods, accounting for just 0.6 percent of US exports in the first half of this year. US banks were holding just $38 billion in Turkish debt at the end of this year’s first quarter.

The prospect of the Turkish crisis spilling over into the European Union is not unwelcome to US imperialism, which sees the EU as a strategic rival. Meanwhile, the collapse of the Turkish lira has reverberated throughout the so-called emerging market economies, devaluing currencies from India to Mexico and South Africa.

International economists have taken note that, while in the past, Washington has intervened in an attempt to calm global markets under conditions similar to that confronted by Turkey—generally accompanied by the imposition of IMF “restructuring” programs—this time it has deliberately sought to exacerbate the crisis.

Analyzing US imperialist policy in 1928, the year before the eruption of the Great Depression, Leon Trotsky warned: “In the period of crisis, the hegemony of the United States will operate more completely, more openly, and more ruthlessly than in the period of boom. The United States will seek to overcome and extricate herself from her difficulties and maladies primarily at the expense of Europe, regardless of whether this occurs in Asia, Canada, South America, Australia or Europe itself, whether this takes place peacefully or through war.”

A decade after the eruption of the last global financial crisis, all of the contradictions of the profit system that produced the market meltdown in 2008 have only intensified. The insoluble conflict between the global economy and the nation-state system, which has been enormously intensified by the globalization of production over the past three decades, is giving rise to a new pre-war period characterized by global trade war, the breakup of old post-World War II alliances and the rise of militarism.

The reckless and destructive policies pursued by US imperialism are giving rise to an immense growth of social tensions and class struggle around the world, including in the United States itself. Therein lies the only viable answer to the growing threat of trade war and multiple military conflicts across the globe igniting a new world war. The decisive question is the building of an international, socialist antiwar movement based upon the working class.

ABOUT THE AUTHOR
The author is a senior editorial commentator with wsws.org, a Marxian publication.

What the neo-Nazi debacle in Washington showed

so basically the US is waging an economic war against europe