Is there a lesson for our time? 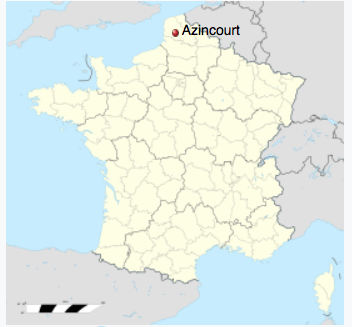 Agincourt (French: Azincourt), the legendary battle in the 100 Years' War, upset all expectations, and ended the primacy of knights, while exposing the uselessness of the old chivalric code when confronted by new more modern tactics. Refusal to learn from experience did not help, either.

On the 25th October 1415 the medieval world collided with the modern age. For more than 200 years armoured knights had ruled the battlefields of Europe. But at Agincourt French knights came face-to-face with a new force, and the brutal encounter that followed changed the face of battle forever. Based on first hand accounts, this film tells the stories of the men who fought and died there. And from their experiences, a very different picture emerges.

The Hundred Years' War of 1337-1453 between France and England is one of the most crucial conflicts in the history of Europe. It changed the social, political and cultural outlook of the countries involved, influenced the change in warfare, brought the end of feudalism closer. The first phase of this war is called the Edwardian War, and one of the most decisive engagements of this conflict was the battle of Crecy (1346). This series will have 5 videos, so don't hesitate to like, subscribe and share. And if you want to support us, you can do it on Patreon: http://www.patreon.com/KingsandGenerals or Paypal: http://paypal.me/kingsandgenerals

Britain: tear down the racist statues – and...