October 25, 2019
Please make sure these dispatches reach as many readers as possible. Share with kin, friends and workmates and ask them to do likewise.

Representative Alexandria Ocasio-Cortez, a member of the Democratic Socialists of America, has fully embraced the demand by the US intelligence agencies that technology monopolies censor political speech on the internet.

At a hearing Wednesday at the House Financial Services Committee, Alexandria Ocasio-Cortez called on Facebook CEO Mark Zuckerberg to “take down lies.”

In reply, the Facebook CEO attempted to explain: “In a democracy, I believe that people should be able to see for themselves what politicians, who they may or may not vote for, are saying.”

The most charitable interpretation of Ocasio-Cortez’s remarks is that she is totally ignorant of the American democratic tradition of free speech. 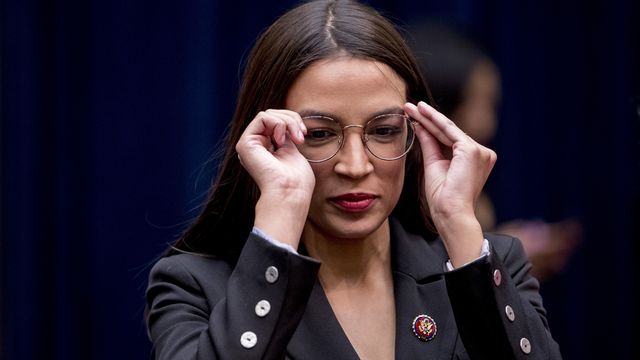 ABOVE: Alexandria Ocasio-Cortez during hearing of House Financial Services Committee with Facebook CEO Mark Zuckerberg as witness. She wants Facebook to patrol opinion more stringently than it already does. She’s either too dumb or too corrupt to defend the First Amendment as it should be defended.

The basic assumption of the first amendment is that the government does not know what is a “fact” and what is a “lie.” It is for the electorate to decide for themselves, and not the business of the government, or corporations acting on its behalf, to force-feed ideas to the public.

This is why the First Amendment prohibits the establishment of religion—that is, the government’s determination that some ideas are “facts” and others are “lies.”

It is a damning condemnation of the politics of Ocasio-Cortez and the Democratic Socialists of America that it is up to a billionaire executive—who has for years carried out censorship at the behest of the government—to explain free speech to her.

But whether through ignorance or malice, Ocasio-Cortez has made herself the mouthpiece of the very intelligence agencies that, having lied about weapons of mass destruction in Iraq and illegally spied on every single American, are now trying to destroy the First Amendment.

The US intelligence agencies initiated a campaign for internet censorship in 2017 after WikiLeaks released a trove of emails documenting the rigging of the 2016 primary by the Clinton campaign, to the detriment of Bernie Sanders, and leading to the resignation of two heads of the Democratic National Committee.

The intelligence agencies and Democrats aligned with the Clinton campaign concocted a narrative that the release of the emails was the outcome of “Russian meddling” in US politics and demanded technology companies launch a crackdown on what they called “fake news.”

From the beginning, the Democrats’ censorship campaign centrally targeted left-wing, anti-war, and progressive organizations. In 2017 Google announced that it would promote “authoritative” news sources over “alternative viewpoints,” leading to a massive drop in search traffic to left-wing sites. Facebook and Twitter followed suit, removing left-wing accounts and pages with millions of followers.

Her statements are a confirmation of the warnings made by the World Socialist Web Site about the politics of the DSA. Far from being the “socialists,” they are nothing more than an adjunct of a viciously right-wing, pro-war party.

In a speech at Georgetown University on October 17, Zuckerberg warned: “In times of social turmoil, our impulse is often to pull back on free expression.… We saw this when Martin Luther King Jr. wrote his famous letter from Birmingham Jail, where he was unconstitutionally jailed for protesting peacefully. We saw this in the efforts to shut down campus protests against the Vietnam War. We saw this way back when America was deeply polarized about its role in World War I, and the Supreme Court ruled that socialist leader Eugene Debs could be imprisoned for making an anti-war speech.”

Regardless of the authenticity of Zuckerberg’s commitment to these conceptions—he is the representative of the largest global social media monopoly and his calculations are ultimately driven by business considerations—it is remarkable that the Democratic Party and a substantial section of the ruling establishment is attacking him from the right.

The New York Times, for example, under the headline, “Defiant Zuckerberg Says Facebook Won’t Police Political Speech,” quoted Bill Russo, spokesman for the presidential campaign of Democrat Joseph Biden. Russo asserted: “Zuckerberg attempted to use the Constitution as a shield for his company’s bottom line, and his choice to cloak Facebook’s policy in a feigned concern for free expression, demonstrates how unprepared his company is for this unique moment in our history and how little it has learned over the past few years.”

Also responding to the position of Facebook, Democratic presidential candidate Elizabeth Warren published a series of tweets alleging that “Facebook is actively helping Trump spread lies and misinformation” and “Mark Zuckerberg’s speech today shows how little he learned from 2016, and how unprepared Facebook is to handle the 2020 election.”

The Washington Post published an editorial comment on October 21 with the title, “Free speech doesn’t mean Facebook must run dishonest ads.” The editors wrote of Zuckerberg: “The principles underlying the talk were noble. But they also avoided the essential question—which isn’t whether Facebook should be generous toward political speech, but whether it should allow even the most obviously untruthful content unlimited reach, as well.”

The Democrats’ open advocacy of censorship makes clear that in the bitter factional battle raging in Washington, there exists no constituency for the defense of democratic rights. The freedom of expression can only be defended through a break with the establishment parties and the building of a working-class movement for socialism.

Breaking: Huge demo in Chile against neoliberal regime.  The west’s favorite way of life is being rejected around the globe, by the vast maority of humanity. (10.25.19)

ABOUT THE AUTHOR
The authors are editorial commentators with wsws.org, a socialist organisation.

That we live under a dictatorship is now unquestionable: The Assange Case