Editor's Note: Bernie Sanders, at best a weak-spined FDR Democrat, is now carving his own political grave through his usual method, a cowardly implosion. And while many people, probably out of desperation, continue cut him a lot of slack arguing that he may be somewhat naive about what he's dealing with, a rather naive assumption in itself, I refuse to see him in that light. I think Sanders is too smart to be that foolish, and that includes his presumed innocence about the true nature of US foreign policy, the Russiagate hoax,  and the system that controls the USA. Maybe he simply likes to be in the spotlight. But whatever makes him tick, good will, ethical principles, thirst for publicity, whatever it may be, if this is the Great Electoral Hope on which so many progressives pin their future, the rotten system they would like to destroy has absolutely nothing to worry about. —PG
The New York Times caused a mini-commotion last week with a front-page story suggesting that Russian intelligence had hacked a Ukrainian energy firm known as Burisma Holdings in order to get dirt on Joe Biden and help Donald Trump win re-election.

But the article was flimsy even by Russiagate standards, and so certain questions inevitably arise. What was it really about? Who’s behind it? Who’s the real target? 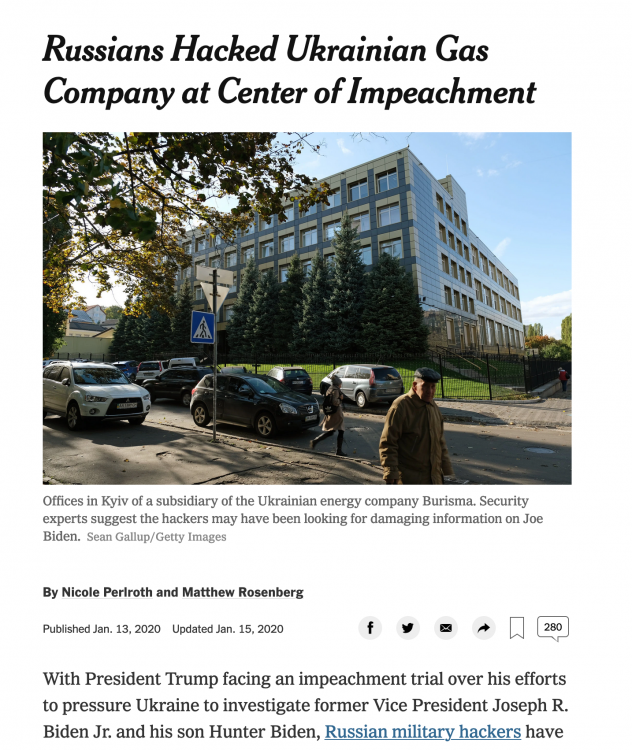 Here’s a quick answer. It was about boosting Joe Biden, and its real target was his chief rival, Bernie Sanders. And poor, inept Bernie walked straight into the trap.

The article was flimsy because rather than saying straight out that Russian intelligence hacked Burisma, the company notorious for hiring Biden’s son, Hunter, for $50,000 a month job, reporters Nicole Perlroth and Matthew Rosenberg had to rely on unnamed “security experts” to say it for them. While suggesting that the hackers were looking for dirt, they didn’t quite say that as well. Instead, they admitted that “it is not yet clear what the hackers found, or precisely what they were searching for.”

So we have no idea what they were up to, if anything at all. But the Times then quoted “experts” to the effect that “the timing and scale of the attacks suggest that the Russians could be searching for potentially embarrassing material on the Bidens – the same kind of information that Mr. Trump wanted from Ukraine when he pressed for an investigation of the Bidens and Burisma, setting off a chain of events that led to his impeachment.” Since Trump and the Russians are seeking the same information, they must be in cahoots, which is what Democrats have been saying from the moment Trump took office. Given the lack of evidence, this was meaningless as well.

But then came the kicker: two full paragraphs in which a Biden campaign spokesman was permitted to expound on the notion that the Russians hacked Burisma because Biden is the candidate that they and Trump fear the most.

“Donald Trump tried to coerce Ukraine into lying about Joe Biden and a major bipartisan, international anti-corruption victory because he recognized that he can’t beat the vice president,” the spokesman, Andrew Bates, said. “Now we know that Vladimir Putin also sees Joe Biden as a threat. Any American president who had not repeatedly encouraged foreign interventions of this kind would immediately condemn this attack on the sovereignty of our elections.”

If Biden is the number-one threat, then Sanders is not, presumably because the Times sees him as soft on Moscow. If so, it means that he could be in for the same neo-McCarthyism that antiwar candidate Tulsi Gabbard encountered last October when Hillary Clinton blasted her as “the favorite of the Russians.” Gabbard had the good sense to blast her right back.

“Thank you @Hillary Clinton. You, the queen of warmongers, embodiment of corruption, and personification of the rot that has sickened the Democratic Party for so long, have finally come out from behind the curtain. From the day I announced my candidacy, there has been a concerted campaign to destroy my reputation. We wondered who was behind it and why. Now we know – it was always you, through your proxies and powerful allies in the corporate media and war machine….”

If only Sanders did the same. But instead he put out a statement filled with the usual anti-Russian clichés: 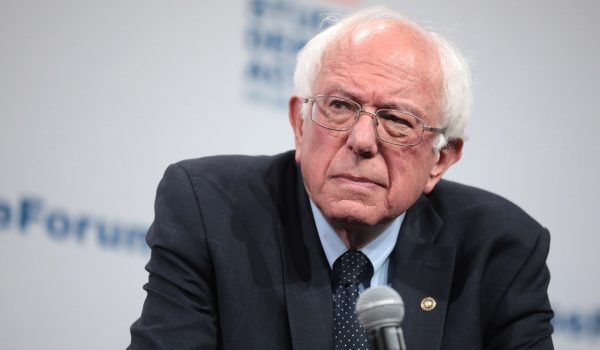 “The 2020 election is likely to be the most consequential election in modern American history, and I am alarmed by new reports that Russia recently hacked into the Ukrainian gas company at the center of the impeachment trial, as well as Russia’s plans to once again meddle in our elections and in our democracy. After our intelligence agencies unanimously agreed that Russia interfered in the 2016 election, including with thousands of paid ads on Facebook, the New York Times now reports that Russia likely represents the biggest threat of election meddle in 2020, including through disinformation campaigns, promoting hatred, hacking into voting systems, and by exploiting the political divisions sewn [sic] by Donald Trump….”

And so on for another 250 words. Not only did the statement put him in bed with the intelligence agencies, but it makes him party to the big lie that the Kremlin was responsible for putting Trump over the top in 2016.

Let’s get one thing straight. Yes, Russian intelligence may have hacked the Democratic National Committee. But cybersecurity was so lax that others may have been rummaging about as well. (CrowdStrike, the company called in to investigate the hack, says it found not one but two cyber-intruders.) Notwithstanding the Mueller report, all the available evidence indicates that Russia did not then pass along thousands of DNC emails that Wikileaks published in July 2016. (Julian Assange’s statement six months later that “our source is not the Russian government and it is not a state party” remains uncontroverted.) Similarly, there’s no evidence that the Kremlin had anything to do with the $45,000 worth of Facebook ads purchased by a St. Petersburg company known as the Internet Research Agency – Robert Mueller’s 2018 indictment of the IRA was completely silent on the subject of a Kremlin connection – and no evidence that the ads, which were politically all over the map, had a remotely significant impact on the 2016 election.

All the rest is a classic CIA disinformation campaign aimed at drumming up anti-Russian hysteria and delegitimizing anyone who fails to go along. And now Bernie Sanders is trying to cover his derrière by hopping on board.

It won’t work. Sanders will find himself having to take one loyalty oath after another as the anti-Russia campaign flares anew. But it will never be enough, and he’ll only wind up looking tired and weak. Voters will opt for the supposedly more formidable Biden, who will end up as a bug splat on the windshield of Donald Trump’s speeding election campaign. With impeachment no longer an issue, he’ll be free to behave as dictatorially as he wishes as he settles into his second term.

After inveighing against billionaire’s wars, he’ll find himself ensnared by the same billionaire war machine. The trouble with Sanders is that he thinks he can win by playing by the rules. But he can’t because the rules are stacked against him. He’d know that if his outlook was more radical. His problem is not that he’s too much of a socialist. Rather, it’s that he’s not enough.

Daniel Lazare is an American freelance journalist, publicist and blogger.

The Bastardization of Traditional Progressive and Conservative Parties

Thanks! Very disappointing, but important information.