August 9, 2020 8 minutes read
Please make sure these dispatches reach as many readers as possible. Share with kin, friends and workmates and ask them to do likewise. 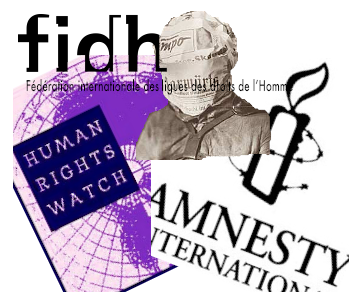 Current Western human rights industry practice has nothing to do with establishing the truth. Increasingly in recent years, US and allied elites have sought to legitimize illegal aggression by exploiting human rights motifs in their attempts to recolonize the majority world.

In any given crisis, human rights NGOs funded by the US and allied corporate elites and governments deploy sensationalist false claims, for example of police murdering peaceful protestors, so as to create a cognitive limbo of doubt and suspicion aimed at disabling opposition to the West’s recolonization campaigns. Over the medium and long term, the steady drip of false accusations against countries resisting recolonization, like Syria and Iran, or Cuba, Venezuela and Nicaragua, creates false memories, corrupting and distorting the historical record and obscuring the West’s crimes against those and so many other countries in the majority world.

Western ruling elites have corrupted human rights organizations and institutions at practically every level using corporate grant making and government funding. The practical results of this corruption mirror corporate techniques of control fraud and strategic avoidance of regulation. Economics writers like Michael Hudson and  William Black, among others, have explained how corrupt US and allied corporations have exploited these fraudulent abuses for decades.  Control fraud is essentially no different from ancient practices like debasing coins, adulterating food products or selling defective goods as fit for use. They all fool people into accepting something that causes them loss, hurt and damage.

In the United States, powerful corporations control US political and institutional life sufficiently to be able to co-opt justice and escape criminal prosecution. This reality crowds out honest, socially responsible business and financial practice. Parallel to control fraud by major financial institutions, other multinational corporations, for example oil, mining or information technology corporations,  operate what various writers call a “veil of tiers” strategy misrepresenting their earnings so as to avoid tax or other regulation, and legal prosecution. More legitimately, in the field of insurance, the “veil of tiers” strategy spreads risks associated with potential litigation. The international human rights industry uses similar techniques to justify and cover up Western attacks against the peoples of the majority world.

The dependence of international human rights NGOs on corporate and government funding and on publicity via corporate media and public relations over time has generated the osmosis of corrupt corporate practice into the human rights industry. Writers like Cory Morningstar have analyzed exhaustively how this takeover by corporate culture of the “non-profit industrial complex serves hegemony as a sophisticated fine-tuned symbiotic mechanism in a continuous state of flux and refinement. The ruling elite channel an immeasurable amount of resources and tools through these organizations to further strengthen, protect and expand existing forms of power structures and global domination.”

In a human rights context, control fraud takes the form of politically motivated, false, sensationalist accusations based on egregiously one-sided, often fact-free research, sometimes using fake pseudo-scientific reconstructions. Accountability for these false accusations is rendered negligible by means of a “veil of tiers” strategy starting at a low level with small, local or national human rights NGOS, progressing via larger international human rights NGOs and auxiliary private contractors to regional human rights institutions, then reaching United Nations organizations and ultimately the highest levels of the international human rights legal system. By excluding independent corroboration, the interchange from one level to the next imparts spurious mutual legitimacy of varying degrees between the organizations and institutions involved.

The process is quasi-judicial with zero accountability, such that attempting to counteract false accusations is extremely difficult if not impossible, especially in the short term. If anything, the human rights industry is even less accountable than multinational corporations. Two recent examples, among innumerable others, confirm the creeping monopolization of the human rights industry by corrupt corporate practice. Against both the Ukraine government in February 2014 and against the Nicaraguan government in May 2018, Western human rights NGOs made very similar accusations that their police forces murdered peaceful protestors indiscriminately. In both cases, the accusations were false.

The context of the killings in both cases was a violent attempt at regime change by a US government funded political opposition. In Ukraine’s case, the opposition had been supported for over twenty years with US government funding amounting to over US$5 billion as confirmed in 2013 by Victoria Nuland, then US Assistant Secretary of State. That US government finance was in addition to funding from US corporate oligarchs like Pierre Omidyaar and George Soros. The most notorious event in the regime change campaign in Ukraine took place over February 18th-20th in 2014 when over 70 people were killed in Kiev’s Maidan square during violent confrontations between police and protestors. The massacre led to the overthrow of the legitimate government and its replacement by a fascist US client regime.

After the event, even CNN felt bound to report a leaked conversation between Estonia’s Foreign Minister Urmas Paet and Catherine Ashton, High Representative of the European Union for Foreign Affairs in which Paet confirmed that a  pro-opposition doctor treating wounded protestors claimed opposition snipers, not government security forces, had shot the protestors. That report was followed by the broadcast from Italy’s Mediaset Matrix television channel of interviews, here and here, with mercenary snipers confessing they had fired on both protestors and police during the Maidan protests in February 2014. The mercenaries had come forward aggrieved at not getting paid by the opposition aligned figures who hired them. Even so, the Ukraine authorities announced their investigation into the shootings was complete, simply repeating the false accusations against the former Ukrainian government despite categorically clear evidence to the contrary.

A prominent part of the Ukraine prosecutors’ false case was a virtual reconstruction of events  by a private New York contractor called SITU Research whose human rights work is funded by US oligarch owned grant making bodies, like the MacArthur Foundation, the Oak Foundation and the Open Society Foundations. Ivan Katchanovski of the University of Ottawa has exposed as phony the SITU Research reconstruction of the Maidan shootings, demonstrating, for example, that in various cases SITU Research’s imaging moved wound locations indicated in the respective forensic autopsy reports in order to suit the video’s conclusions. Katchanovksi’s detailed analysis draws on other evidence omitted by SITU Research which also contradicts their claims, for example witness testimony from 25 wounded opposition supporters that they were shot from opposition controlled buildings.

Katchanovski points out that numerous video and TV footage shows opposition snipers and shooters in buildings controlled by the opposition. That footage is supported by over 150 witness testimonies confirming snipers were firing from those locations. Katchanovski also notes that Brad Samuels, founding partner of SITU Research “said in a video [start at 55:16] that ‘…eventually, there is a consensus that there was a third party acting. It is clear from forensic evidence that people were shot in the back. Somebody was shooting from rooftops.’ ” Katchanovski remarks that Samuels’ “striking observation was not included anywhere in the SITU 3D model report that he produced.” Katchanovski’s critical analysis of SITU Research’s material and of the broader official Ukraine investigation into the Maidan massacre has never been seriously challenged.

Similar false accusations ignoring readily available contradictory evidence and also using SITU Research modeling were made against Nicaragua’s government earlier this year. On May 30th the Organization of American States subsidiary body the Interdisciplinary Group of Independent Experts (GIEI), the Argentinian Forensic Anthropology Team and SITU Research jointly published a video allegedly proving that Nicaragua’s police shot and killed unarmed protesters at a demonstration on May 30th 2018. But detailed analysis of the video shows that in this case too SITU Research have misrepresented data, namely the distance between the police and the protestors which was in fact about 175 metres, in order to harmonize the reality of what happened with their virtual reconstruction which claims police snipers fired from a distance of around 250 metres.

The video footage of the protests in Nicaragua contains no scenes where Nicaraguan police use their firearms. Similarly, just as in their false reconstruction of events in Kiev’s Maidan square, SITU Research omitted a substantial body of information contradicting their account of the shootings in Managua on May 30th. The context in this case too was of extremely violent protests by organizations funded by the US government with over US$15 million just in 2017-2018. For example, local human rights organizations received over US$3 million from the US government that year as did local media NGOs. Although, two solidarity organizations wrote and published an open letter to the organizations who produced the video, respectfully questioning their findings, to date the letter has received only a formal acknowledgment without replying to the questions.

In both Ukraine and Nicaragua, the US government funded local opposition aligned NGOs to make false allegations of very serious human rights violations. A private company contractor was funded by US corporate interests to produce false pseudo-scientific material unfairly incriminating the governments for those violations. International human rights NGOs repeated the false accusations on the basis of that same false evidence. Regional human rights institutions accused the governments concerned on the basis of that same material.

The accusations are false but the Nicaraguan government and accused members of the former Ukrainian government are denied a fair defense. This same process has been repeated over and over again against governments resisting US and allied policies. Western human rights organizations share the same corrupt methodology as their corporate and government patrons. They make false claims, suppress inconvenient evidence, do all they can to avoid independent scrutiny and systematically evade accountability.

KNOWLEDGE IS A WEAPON. ARM YOURSELF.