"Biden is war before relief"


The latest US bombing of Syria bearing this time Joe Biden's imprimatur should remind everyone that the empire never sleeps, never relents. Really "woke" people should be outraged, but we don't have really "woke" people in the United States, only a cynical simulacrum of woke, just like we only have a simulacrum of free media and democracy. The real left, which, constantly pummeled and betrayed, still thankfully exists, has summed up the situation well. Their battle cry, "Biden is war before relief", telegraphs the situation well; it is indeed a perfect snapshot of the US ruling class' appalling moral and political degeneracy.

Not that imperialist war would ever be OK, or justified, even if the situation at home were "normal". But to choose a moment defined by such vast national penury—in the midst of a horrific pandemic, a broken economy with tens of millions unemployed and small businesses wiped out across the board, and with key state—Texas— still in the grip of a brutal winter storm that collapsed its libertarian electric grid—to pick this juncture for yet another cowardly assault on Syria, (a Nuremberg-class crime, mind you), demonstrates that the forces that Biden represents are not just completely and sociopathically indifferent to the plight of the American masses, but that they feel, wrapped in thick layers of cynical disinformation and shielded by the armed might of the US state, immune to any judicial or political punishment.

Viewed in that light, the bombing of Syria is more than just a case of extremely perverse priorities, an epic dereliction of duty worthy of incompetent despots. As Caleb Maupin notes, it is also an act of recklessness that threatens to drag all of humanity into the cauldron of a terminal nuclear war.

The videos below, authored by Jimmy Dore, Craig "Pasta" Jardulla and Fiorella Isabel (the tireless hosts of The Convo Couch), and Caleb Maupin, carry some of the best comment and analysis on the current situation. Their voices represent the true American left.

While the real left denounces Biden, the liberals cheer

Meanwhile, at the liberals' cesspool, a typical "woke"—Amy Siskind—who, it would seem, is almost a caricature of the cluecomp affluent Democrat demographic, in a tweet that she soon deleted, could not help cheering the new commander in chief for acting presidential and showing "competence" while discharging his imperialist duties against the much vilified Bashir al-Assad, and his equally demonized Iranian allies.  Clearly, in Siskind's mind, one of these new online influencers, that is propagandists for the new technofascist regime infecting the West (and who for good measure proudly displays the LGBQT emblem), the orange man lacked finesse when blowing up brown and black people to smithereens.  Siskind justly caught some hell for her faux pas and glaring insensitivity, but still, she represents the majority opinion in this benighted nation. Just look at how many clueless people follow her: more than half a million!

But, let's begin at the beginning—with Siskind's own Twitter card. 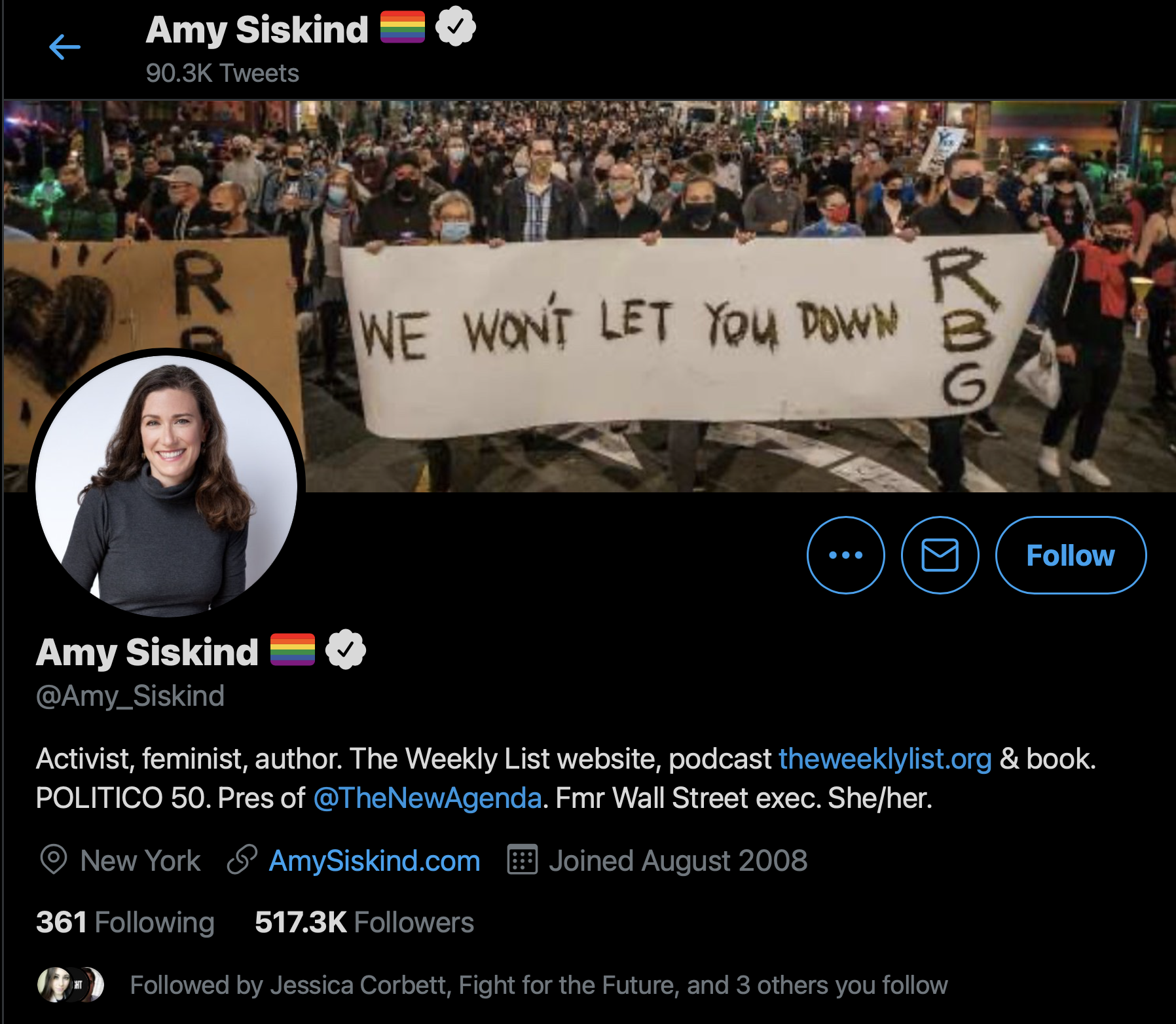 Her political allegiance and acumen are clear:

Below, responses to her (withdrawn) tweet praising Biden for his aggression on Syria: 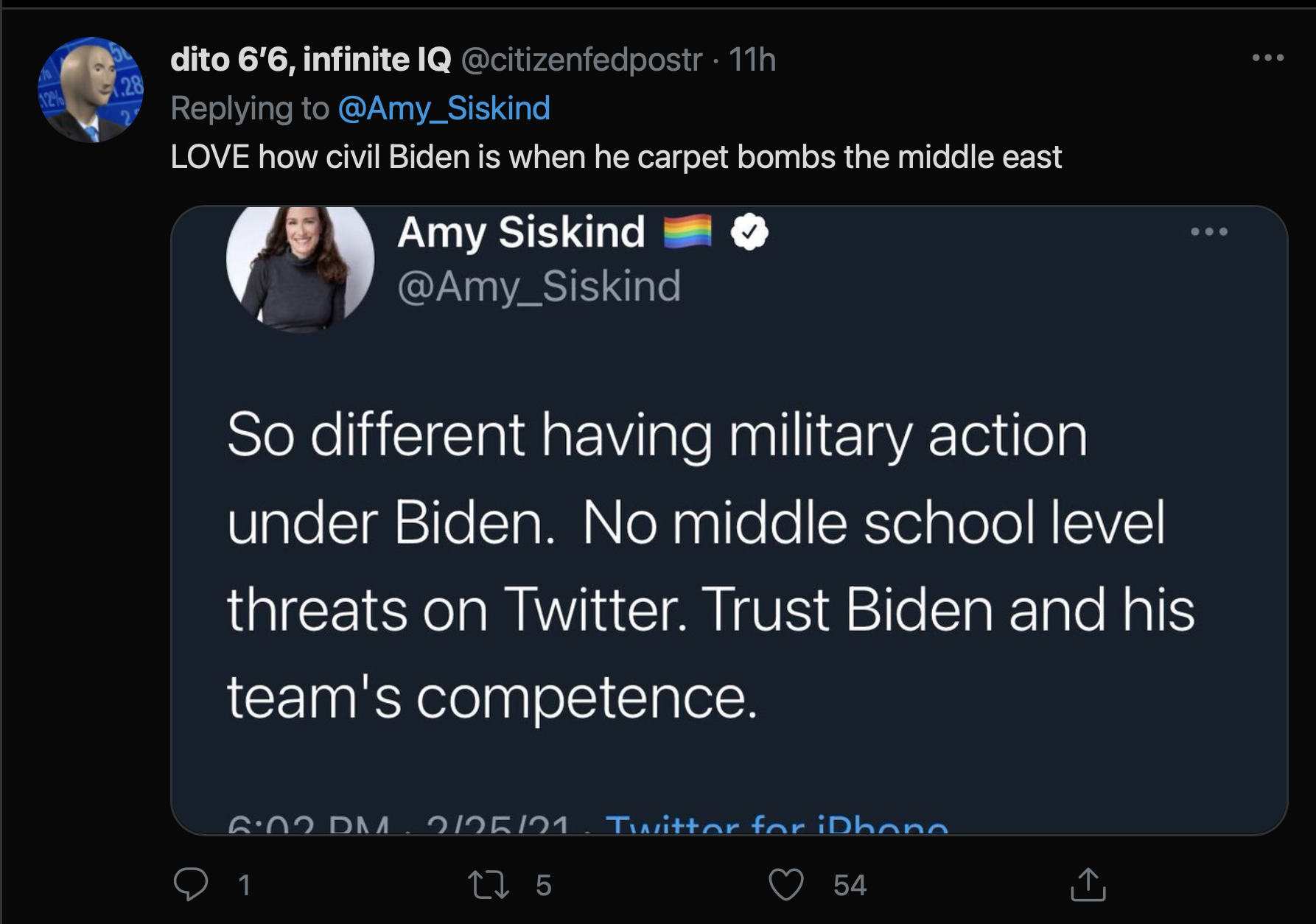 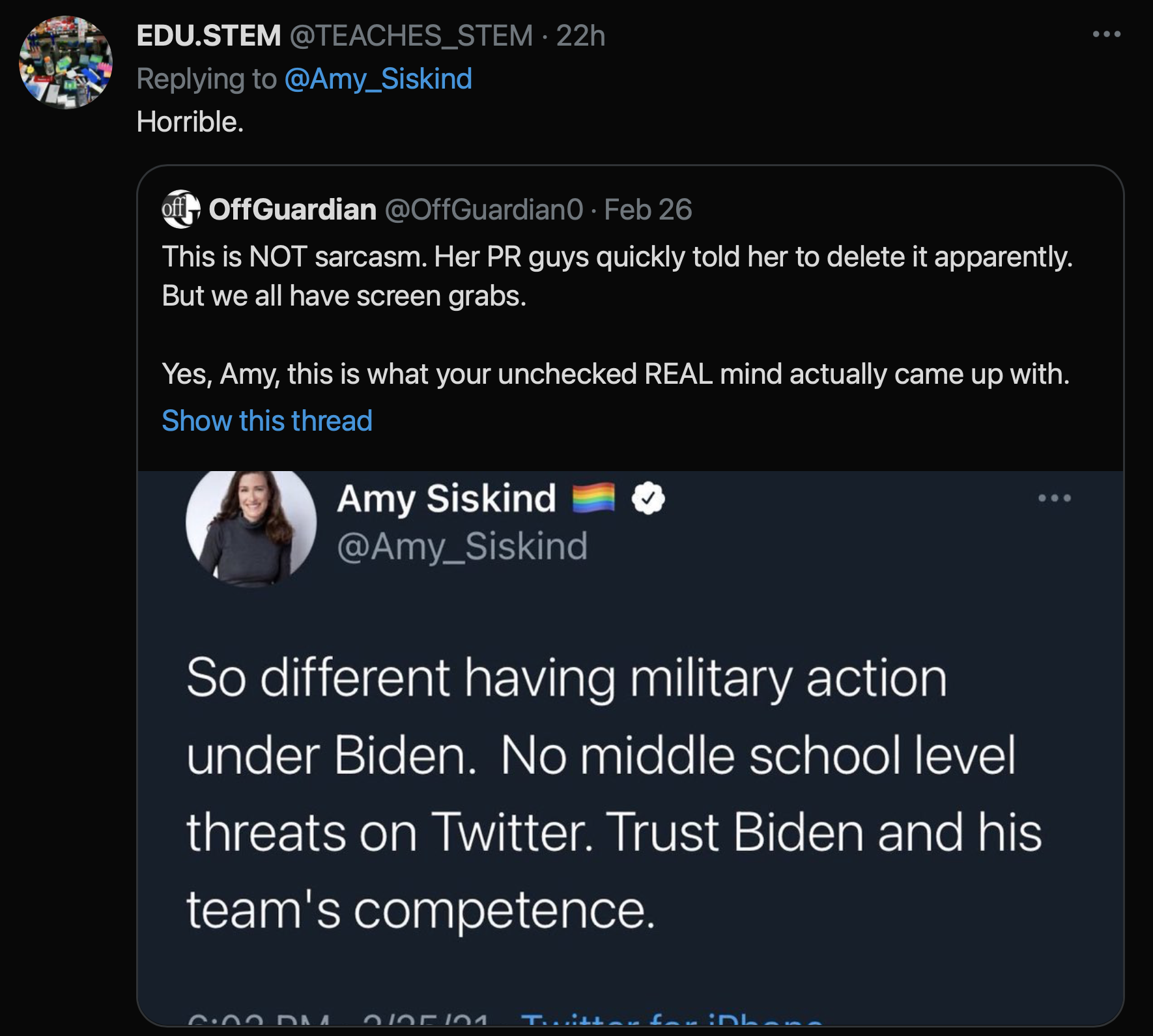 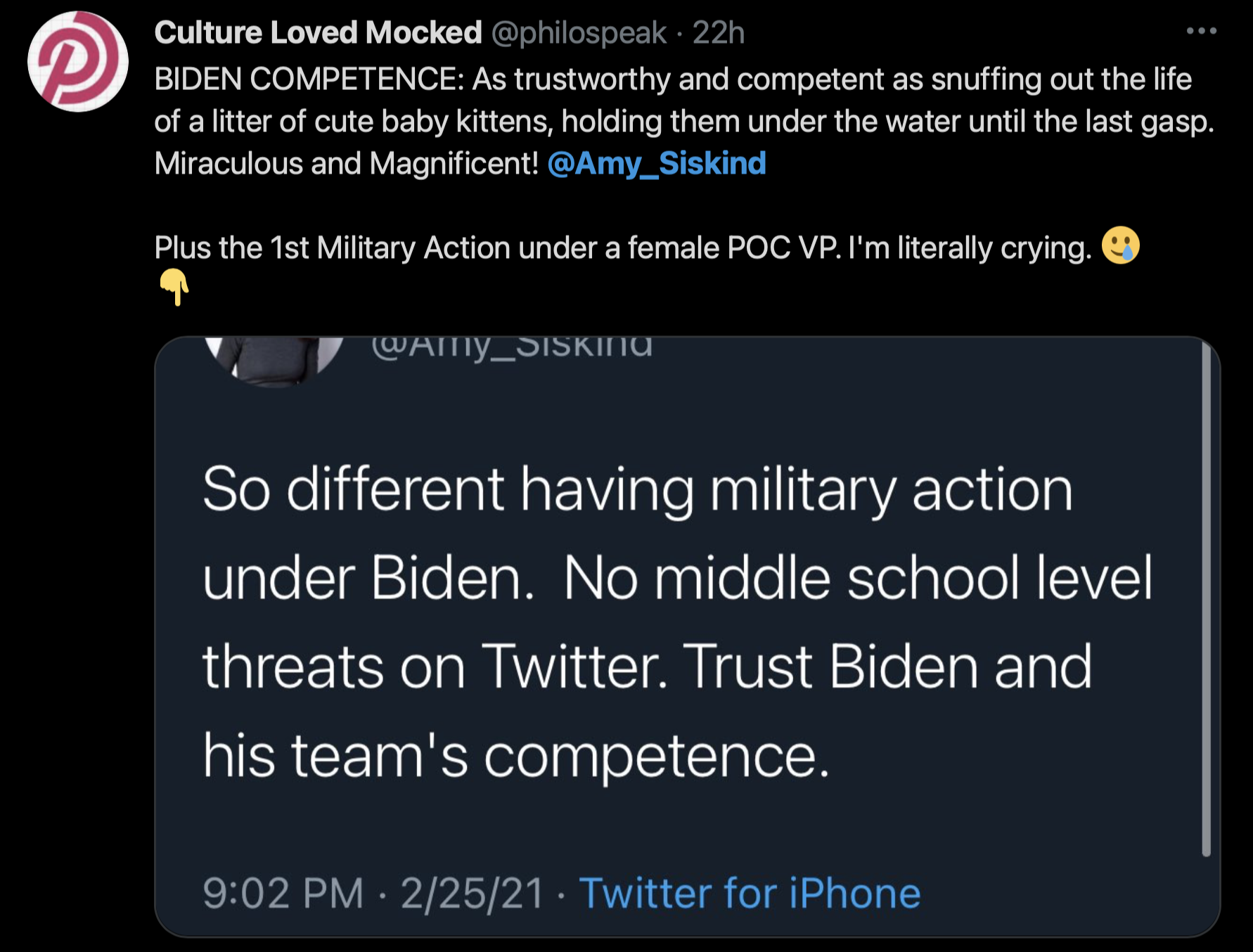 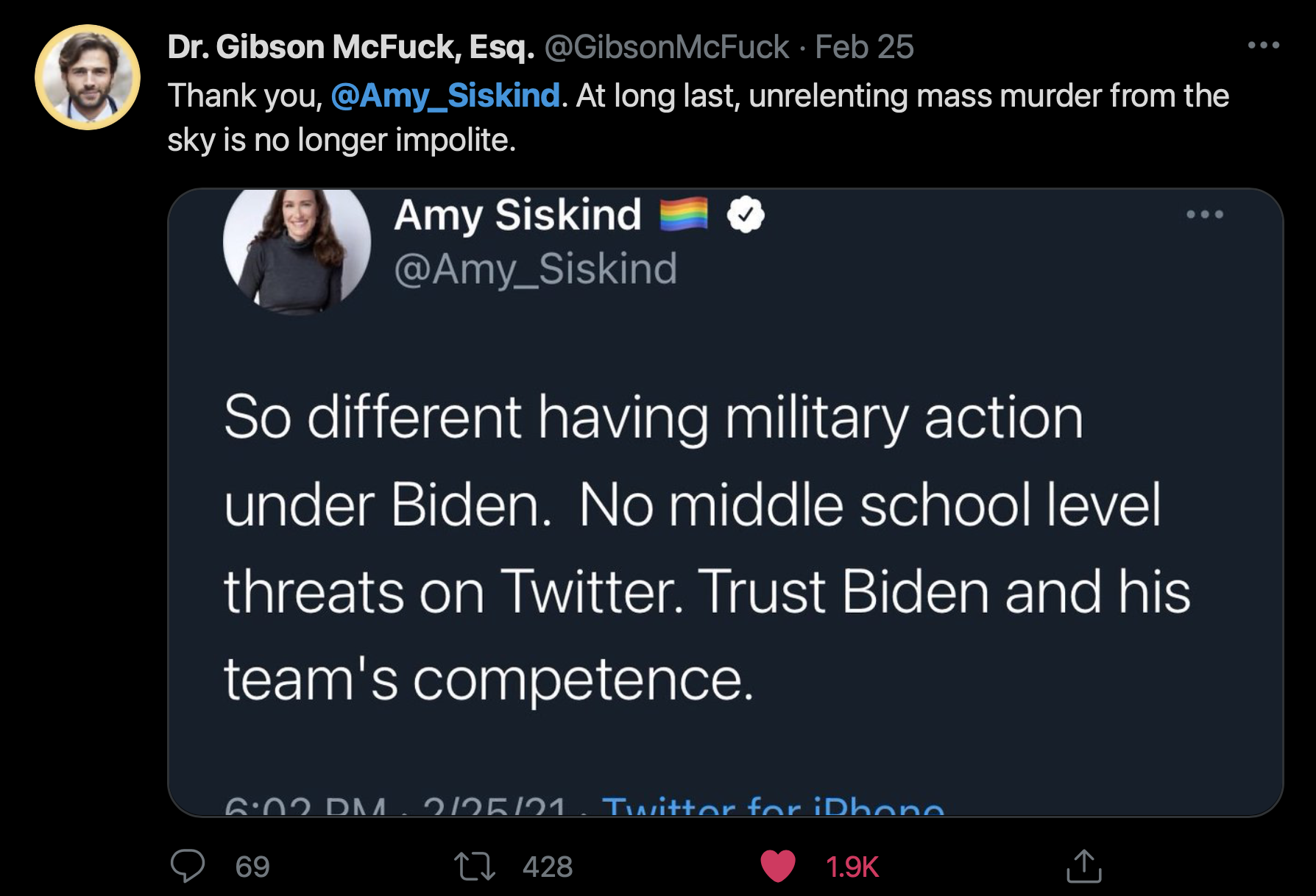 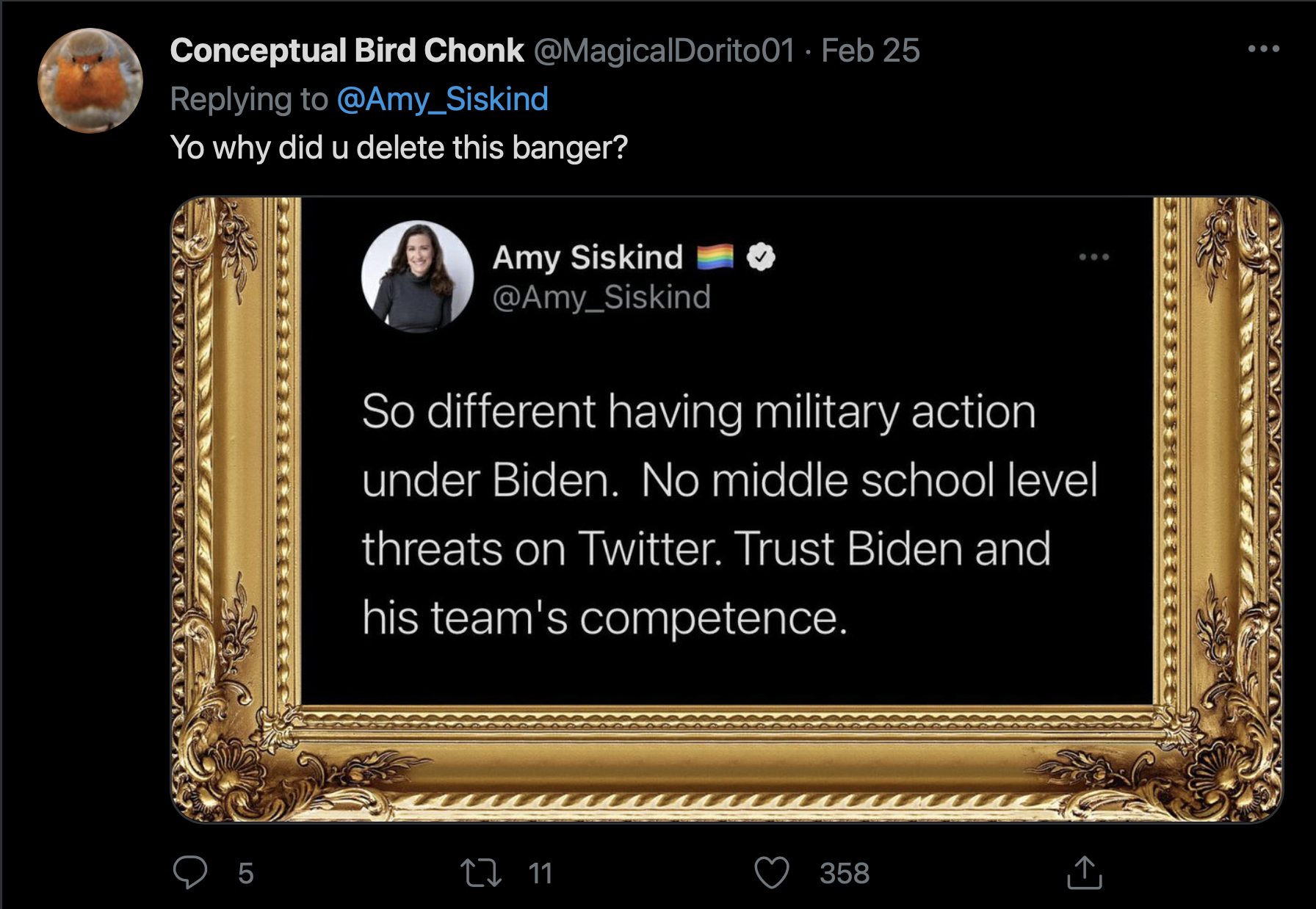 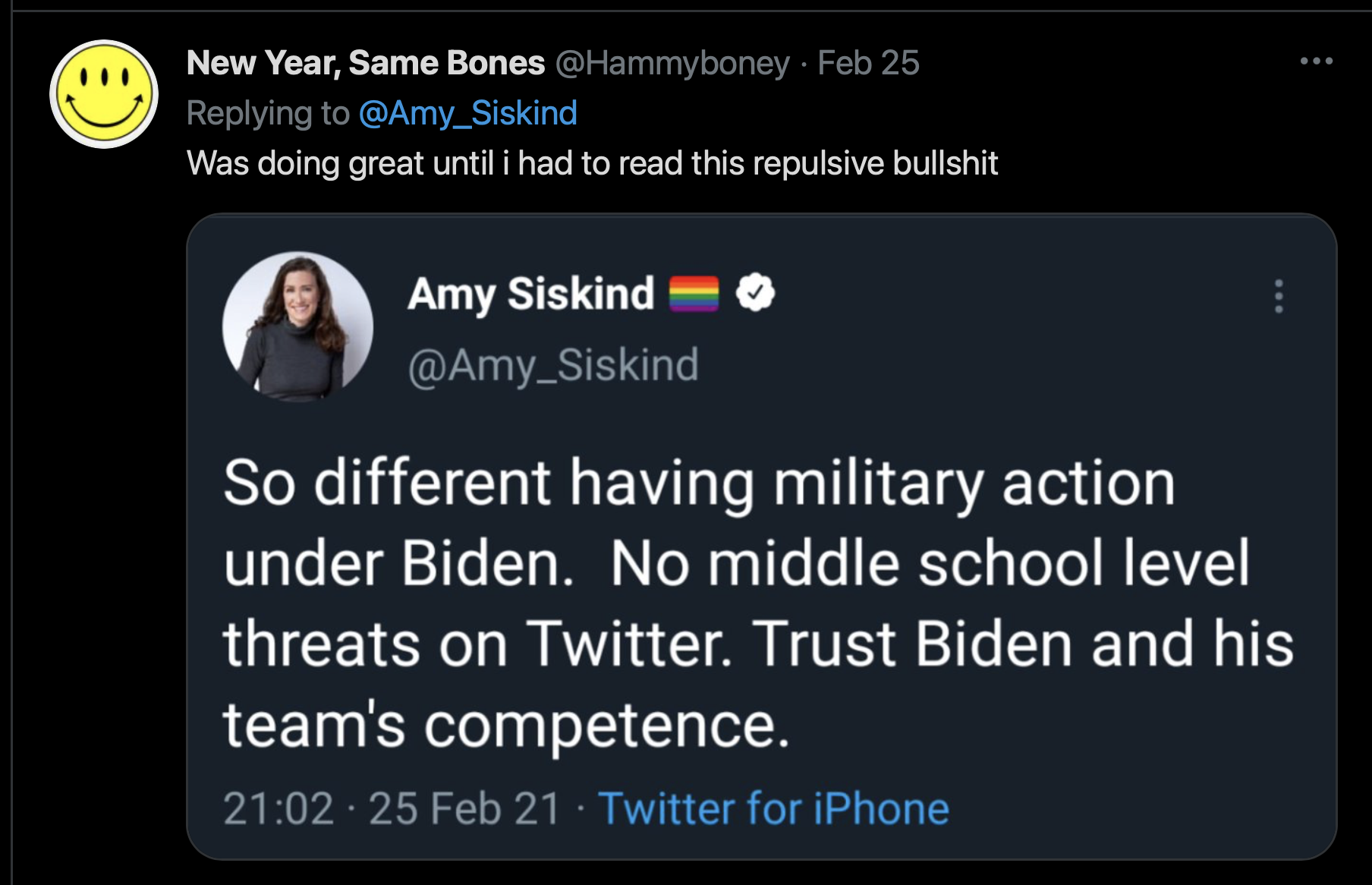 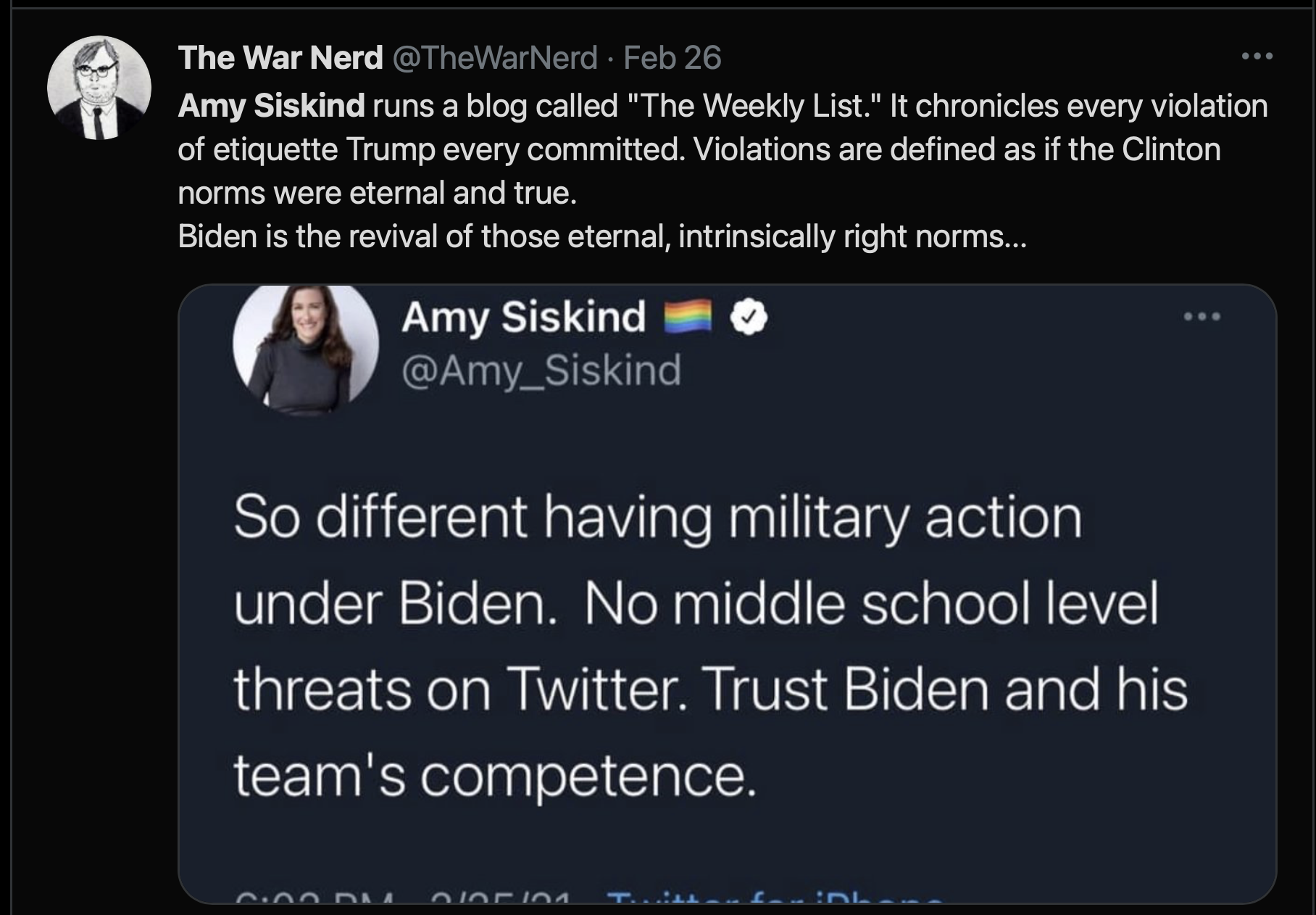 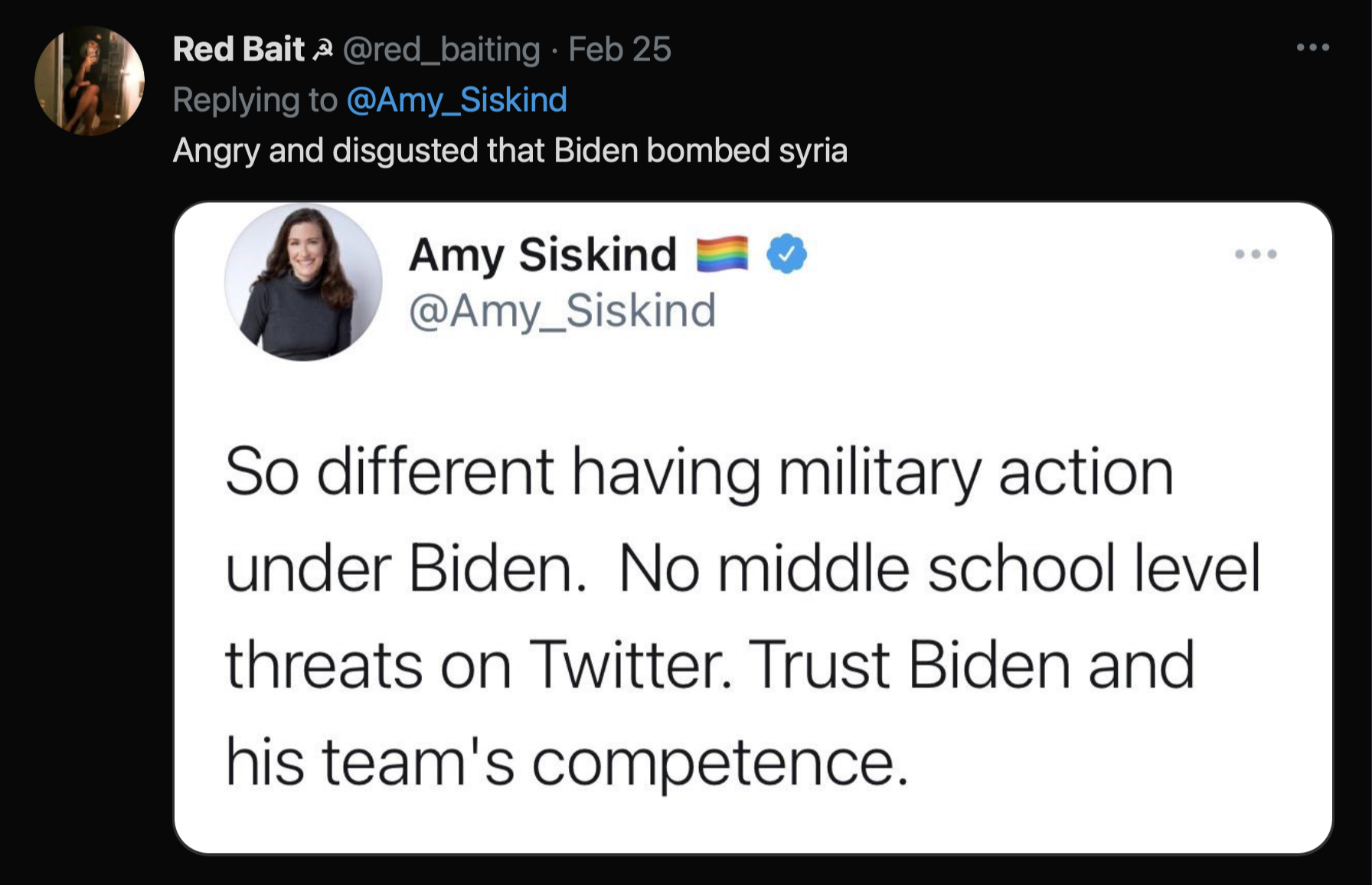 And so it goes, friends.