Never has Europe's degeneracy and prostitution been more obvious than now.

November 26, 2022 8 minutes read
Please share this article as widely as you can.

European politicians are once again fueling war with their calumnies against Russia and their deliberate stoking of Nazi embers. 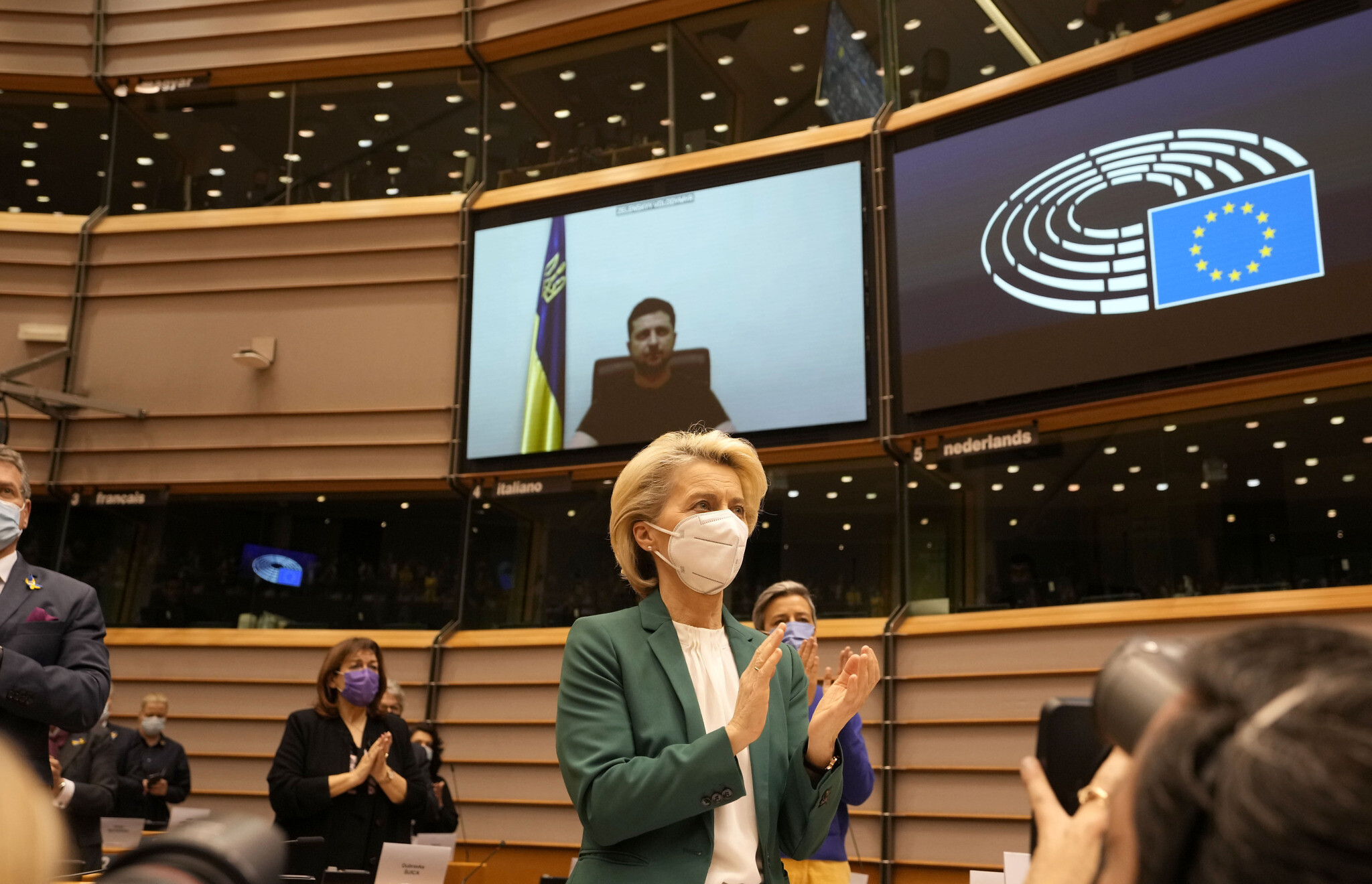 European Commission President Ursula von der Leyen applauds after an address by Ukraine's President Volodymyr Zelenskyy, via video link, during an extraordinary session on Ukraine at the European Parliament in Brussels, Tuesday, March 1, 2022.  There is no more abject blindness than when the blind refuse to see. (AP Photo/Virginia Mayo)

One would think, perhaps, that with a perilous war raging on the European continent, the European Union’s parliament might want to show some leadership in promoting diplomatic solutions to end that conflict. No, not a bit of it.

The European Parliament has shown itself again this week to be nothing more than a giant reactionary talking shop whose proclaimed democratic values have an inverse relationship to its copious chamber of 705 parliamentarians.

Only three years ago, the same parliament voted on a resolution that shamefully distorted the origins of the Second World War by trying to equate the Soviet Union with Nazi Germany.

The parliament comprising lawmakers from 27 member nations passed a resolution this week condemning Russia as “a state sponsor of terrorism and a state that uses the means of terrorism”. The motion is legally non-binding, and so, therefore, has no power of enforcement. It is a highly “symbolic gesture” of censure against Russia. In other words, it is naked political propaganda for a political purpose – to smear the Russian Federation and to inculcate the public perception of Russia as a barbarian rogue that needs to be eliminated.

Not even the United States has gone this far. The Joe Biden administration has balked at suggestions to similarly designate Russia a terror state. Washington has balked because it is a ludicrous incendiary step, as well as blatantly false.

The European resolution text was a screed of rabid Russophobia packed with anti-Russia allegations referring to the nearly 10-month-old war in Ukraine. Many of the claims are baseless or have been shown to be outright fabrications contrived to malign Russia. They were also hilarious in their stupidity.

The degree of European hypocrisy often matches Washington's, and in some cases clearly exceeds it.

For example, at one point the resolution absurdly blames Russia for blowing up its own Nord Stream gas pipelines under the Baltic Sea back in September. This contradicts plenty of evidence that the explosions were in fact carried out by the U.S. and Britain in a covert military operation to permanently sever European gas trade with Russia. Yet the European parliamentarians accused Russia of leaking its own gas into the Baltic Sea from the sabotaged pipes (costing the Russian state billions of dollars worth) and thereby inflicting “an environmental attack on the EU”. Ergo, the Russians are not only barbarians, they must be very stupid barbarians!

In another head-spinning example, the European Parliament resolution accused Russia of terrorizing the Ukrainian population by occupying the Zaporozhye Nuclear Power Plant (ZNPP) and “making it a military target”. That’s a weird sort of admission of the reality that for months now the Ukrainian military has been shelling Europe’s biggest nuclear station with NATO artillery threatening to create a radiation disaster. Yet instead of pointing fingers at Kiev and NATO, the European lawmakers lay the blame on Russia for making the ZPNN a military target. Oh, those dastardly barbarian Russians!

Lamentably, this only shows that the European Parliament has managed to brazenly turn reality on its head. The NATO and EU-backed Nazi regime in Kiev is the entity that is threatening to ignite another world war in Europe, one that would lead to a global conflagration.

The insanity of the European parliamentary resolution is beyond irony. It came only days after video evidence emerged that Kiev’s Nazi military was executing Russian POWs. It also came only a week after the Ukrainian regime was caught red-handed firing a missile at Poland killing two civilians with the obvious intention of causing a provocation in order to incite an all-out NATO war against Russia.

The resolution accused Russia of committing “aggression on Ukraine” for the past nine years. This is another example of reality-inversion. It was the U.S. and EU-backed coup d’état in Kiev in 2014 that spawned a Nazi regime to embark on terrorism against the Russian-speaking people of the former Ukrainian southeast Donbass region (now a part of the Russian Federation). The weaponizing by NATO of a Russian-hating Kiev regime that openly adulates Third Reich collaborators led to the present war in Ukraine.

That war has escalated because the United States and NATO have pumped Ukraine with billions of dollars of weapons. The latest total military aid from the US stands at nearly $20 billion {Nearly 100 billion in latest accounting.-Ed]  Washington and its European Union allies have bankrolled the Kiev regime to the tune of an estimated $126 billion since February this year. Much of that taxpayer-funded largesse has been siphoned off by a corrupt cabal in Kiev headed up by the comedian-turned-president Vladimir Zelensky.

The war started because of NATO and Europe’s refusal to engage with Moscow in diplomatic negotiations over its long-held strategic security requirements. And the war has escalated because NATO and Europe have sought every way to militarize the conflict while spurning diplomacy.

Russia has up to now tried to minimize military operations in Ukraine to neutralize the Nazi regime and its genocidal aggression. But it has become grievously clear that the Kiev regime and its NATO handlers have little capacity for finding a political settlement based on Russia’s strategic security concerns.

The endemic terrorism that the United States, NATO and European Union have bankrolled and weaponized in Ukraine shows that Russia has now no choice but to defeat the Kiev regime through military victory. The enemy mobilized the Ukrainian state in a war against Russia. The enemy did not hold punches in firing indiscriminately at Russian cities, destroying civilian infrastructure and waging “Total War” through economic sanctions and sabotage. The targeting by Russia of Ukraine’s power grid with increasing missile barrages is a situation of military exigency brought about by NATO’s implacable weaponizing of Ukraine. Russia is not the terror state here. It is the United States and European Union who have made war inevitable.

The European Parliament accused Russia of carrying out massacres when it is the NATO and EU-backed Nazi regime that has perpetrated vile atrocities against its own people at Bucha, Mariupol, Kramatorsk and other places of infamy in a macabre charade to blame Russia.

With supreme arrogance, the European Parliament touts itself as a bastion of democracy, human rights and international law. In reality, this bureaucratic colossus has become a propaganda machine for Nazi terrorism in Europe. This degeneration of the parliament has been underway over several years, brought about largely by the expansion of the EU with anti-Russian states. Like NATO, the bloc has become a reservoir of toxic Russophobia due to similar dynamics of expansion.

Europe has seen two world wars over the past century that resulted in as many as 100 million deaths. Russia has felt the suffering and loss from wars more than any other nation. European politicians are once again fueling war with their calumnies against Russia and their deliberate stoking of Nazi embers.

ABOUT THE AUTHOR / SOURCE
The Strategic Culture Foundation is a Russian think tank based in Moscow.

Biden and Burns in Double Act to Split Putin and Xi