By Steven Jonas, MD, MPH
The culture of “nice” embraced by establishment liberals reeks of hypocrisy and opportunism. And it’s self-defeating, too. National television has contributed a great deal to the implantation of “polite discourse,” but polite in the mouths of crooks and criminals is a tool for deceit. And how long can liberals remain in denial about the ugliness of the situation in the midst of what is clearly a developing civil war?—eds 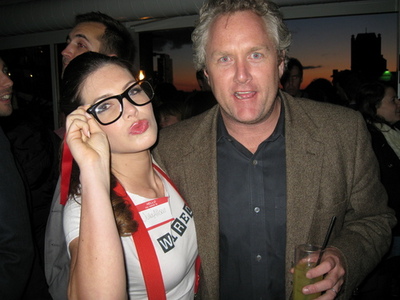 Even contemptible characters like Breitbart find groupies and admirers.
Celebrity is a powerful magnet for babes.

“Andrew Breitbart, the conservative blogger and journalist, died suddenly on Thursday morning, according to his website Big Journalism. He was 43. The site said that Breitbart died of ‘natural causes’ shortly after midnight on Thursday.” So the Huff Post Media of March 1, 2012 told us. And with statements posted on the same site, the so-called “liberals” that Breitbart used to rail against and do absolutely scandalous dirty tricks against are being so bloody polite. For example, Shirley Sherrod (see below) said: “”My prayers go out to Mr. Breitbart family as they cope through this very difficult time.” Media Matters, which did much to expose Breitbart’s dishonesty, said: “We’ve disagreed more than we’ve found common ground, but there was never any question of Andrew’s passion for and commitment to what he believed.” And then there’s Arianna Huffington herself: “I was asked many times this morning for my thoughts on what Andrew meant to the political world, but all I can think of at the moment is what Andrew meant to me as a friend, starting from when we worked together — his passion, his exuberance, his fearlessness. And above all, what I’m thinking of at the moment is his amazing wife Susie and their four beautiful young children. My love and thoughts are with them right now.”

Now let’s say the Red Army was not on the verge of conquering Berlin when Paul Josef Goebbels, Reich German Minister of Propaganda, 1933-45, committed suicide on April 30, 1945, and there had been a bunch of liberals around to make comments on the events. Do you think that they would have followed the pattern above? In my view quite possibly. For example, one might have said something like: “We’ve disagreed more than we’ve found common ground, but there was never any question of Paul Josef’s passion for and commitment to what he believed. And he was really fun at parties, truly a lady’s man, donchaknow.” Breitbart was a master propagandist, blending truth and fiction in the manner that Goebbels first brought to a very high level of effectiveness, as part of what is commonly called “The Big Lie Technique.”

On the other hand one might hope that at least some of the comments-on-the-death-of-an-opponent that liberals might have made at the time might have been in league with what Breitbart himself actually said on the passing of Senator Edward M. Kennedy. From the same issue of the Huff Post that carried Arianna’s ludicrous statement: “After Sen. Edward M. Kennedy of Massachusetts died in 2009, Breitbart tweeted, ‘Rest in Chappaquiddick’ and called him ‘a special pile of human excrement.’ When critics questioned his tone, he tweeted they ‘missed my best ones!’ “

These animals are animal-like and some of our supposed best representatives respond with sweetness and light? “He was a friend of mine?” Come on! This is the man who doctored a video of Ms. Sherrod to make it appear that she was making a reverse-racist statement when she was actually calling for racial harmony and understanding. And the idiots in the White House didn’t even ask Ms. Sherrod what really happened before they canned her. Breitbart was the man who made up the videos that were used to mount the national campaign that put one of the biggest electoral enemies of the Republican Party, ACORN, out of business.

We are in a civil war folks. The corporatist state side (AKA the corporate power) knows it. Many on our side don’t. They still think that it’s politics as usual. They thin that at some time the Republican Party will come to its senses and return to being the traditional center-right party it was until the Gingrich wing took it over. It’s time that we all begin to wake up. The GOP is now a far-right party, in the context of what such parties look like in the other advanced capitalist nations. US capitalism has become increasingly less dependent on manufacturing and increasingly more dependent on the extraction and sale, at home and abroad, of fossil fuels, and on profits to be derived from purely financial transactions. Since the GOP cannot run on such a platform, it must run on such issues as racism, homophobia, misogyny, religious bigotry (abortion illegalization being based much more on the latter than the former), Islamophobia, and the drive towards Permanent War (although other words are used to describe it).

As OWS ramps up again this spring, especially if it allies itself with what’s left of militant labor in this country (and there still is one), starts to develop a clear political program, and learns how to deal with the agentsprovocateurs that have clearly already infiltrated it, they will draw an ever-fiercer and violent response from the GOP/state. And of course the GOP already has in place a very advanced voter suppression and vote-count-cheating program which they may, or may not, choose to use in 2012, depending upon other factors.

Their current leaders, like Rush Limbaugh, Roy Blunt, Rick Santorum (leading candidate for their 2016 nomination), Karl Rove, Roger Ailes, and the late Andrew Breitbart are not nice people. The Senate GOPers are not Bernie Sanders’ “colleagues,” as he so kindly persists in calling them. They are his enemies and the enemy of everything the good Senator stands. OK, Bernie. Is “enemy” too sharp a term for you? How about “adversaries” at least? Let’s stop playing “Let’s Pretend.”

A Second Civil War is a real possibility, if the present measure of control by the Corporate Power and its political puppets in the GOP and its media allies comes under a real challenge. An attempt to impose a fascist state, under a “Constitutional” cloak enabled by its puppet Supreme Court, could very well happen, followed most surely by a violent resistance, at some level. The Andrew Breitbart clones would be right out in front on your TVs and the Web, promoting that fascist development. Let’s recognize that fact now, and stop referring to such people as our “friends” and, should you believe that there is something to it (I do not), worthy of prayer. Please. 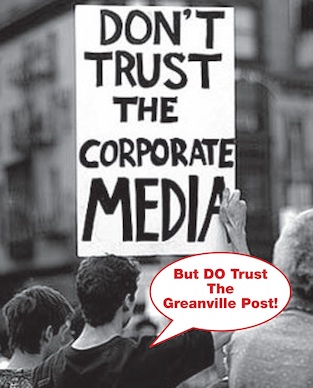 The Absurdity of Intellectual Property

Cancel This Book: The Progressive Case Against Cancel...