STEVEN JONAS: A Comment on “Left Anticommunism: the Unkindest Cut” 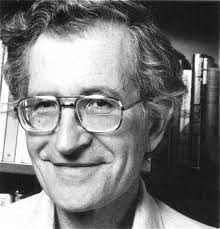 Noam, Noam…must you bash the Soviet Union to maintain credibility? And if so, with whom?

Wherein one of our senior editors weighs in on a topic that never quite goes away, the frequent expression of anti-Sovietism and even anticommunism by people who define themselves as “left” (not merely liberals) in the United States and other parts of the developed capitalist world. As Michael Parenti and others have noted, the practice is so generalized as to constitute at times active de facto collaboration with the global imperialist system, and some of the biggest voices are not exempt:

“Many on the U.S. Left have exhibited a Soviet bashing and Red baiting that matches anything on the Right in its enmity and crudity. Listen to Noam Chomsky holding forth about “left intellectuals” who try to “rise to power on the backs of mass popular movements” and “then beat the people into submission. . . . You start off as basically a Leninist who is going to be part of the Red bureaucracy. You see later that power doesn’t lie that way, and you very quickly become an ideologist of the right. . . . We’re seeing it right now in the [former] Soviet Union. The same guys who were communist thugs two years back, are now running banks and [are] enthusiastic free marketeers and praising Americans” (Z Magazine, 10/95).”

Chomsky’s imagery is heavily indebted to the same U.S. corporate political culture he so frequently criticizes on other issues. In his mind, the revolution was betrayed by a coterie of “communist thugs” who merely hunger for power rather than wanting the power to end hunger…(1)
________________

[dropcap]T[/dropcap]he Greanville Post has recently re-published an excellent (and lengthy) column on “Left anti-Communism” by historian and political scientist Michael Parenti (https://www.greanvillepost.com/2012/01/01/left-anticommunism-the-unkindest-cut/),accompanied by a short but as always to-the-point introduction by our Editor/Publisher, Patrice Greanville. (There are also some very enlightening comments [and a few not-so-enlightening ones] at the end of the column). Prof. Parenti deals with those self-styled “anti-communist” leftists, such as Noam Chomsky, who, when presenting critiques of such subjects as U.S. imperialism never fail to inform their readers that whatever else they say, they have no use for any part of the Soviet experiment as a possible solution to the crisis of capitalism and that no one can outdo them in their condemnation of Stalinism. I do not have to repeat Parenti’s excellent critique of so-called “Left anti-communists,” who are actually allies of the Right. But let me add a few thoughts to that critique, and to his analysis of the Soviet experience.

First, I have never liked the work of Noam Chomsky, precisely because of the reasons that Parenti lists so well. Further, it is fascinating how Chomsky’s thinking about socialism in the Soviet Union (all bad, as if by doing so he could thus curry favor with anybody to his right — not a chance) cripples his own thinking about capitalism and imperialism and what to do about them. He is a great fact-gatherer. But then he hardly ever comes up with solutions. Why? He cannot because the facts he marshals lead one invariably to the necessity of socialist revolution of some sort and since he thinks that the Soviet model was the only possible one, he is crippled in his thinking.

Second, as to the Soviet experience, it did have major successes, as described by Parenti. But it did have its failures, to be sure. They had multiple causes. But very importantly in my view, as Parenti says although he does not characterize it in exactly this way, the Soviet experience must be seen in the context of what be described as the “Seventy-Five Years War Against the Soviet Union 1917-1992.” It began with the Intervention in the Russian Revolution at the end of 1917. It did not end until the Soviet Union was brought to its knees in 1992 by, to be sure, its own inner weaknesses, but also very much by the Arms Race, by its enforced isolation from normal commercial and diplomatic relations with the West, and by the U.S. created “Afghanistan Trap.” In fact, the latter’s inventor, the Carter National Security Advisor Zbigniew Brzezinski, has boasted of being its original creator in 1978-79 with the specific aim of creating “The Soviet Viet Nam.”

As to the horrors of Stalinism, in 1926 or so, Trotsky was supposed to have described Stalin as the “grave-digger of communism,” should he ever become General Secretary. In my view, the most important failure of the Soviet Union was indeed the failure to ensure the survival of socialism in it. Perhaps Trotsky was right when he said that there cannot be socialism in one country, precisely because of what became the 75 Years War. But it was Stalinism, economically, governmentally, socially, and politically, as extended by Brezhnev et al after the overthrow of the sort-of-Bukharin heir, Khrushchev, in 1964, that did eventually lead to the collapse of Soviet Socialism, whatever there was left of it. Was there an alternative to the horrors, and they were horrendous horrors, of Stalinism, that would have led to the survival of the Soviet Union for as long as it did make it against the constant imperialist onslaught? We’ll never know.

What we do know is that history proceeds in stages. Socialism failed in the Soviet Union for both external and internal reasons. An important contributor to the latter set was the dearth of second-generation truly socialist leadership. This followed the murder of the best Communists in the Purges and the deaths of many of their best potential young successors on the Front Lines in WWII, both as soldiers and as Party members specifically sought out for murder, as is well known, by the Nazi Einsatz Gruppen. However, does that failure mean that socialism can never succeed anywhere (including China, which may yet follow Lenin’s “two steps forward, one step back” dictum with another two steps forward following the current one step back at some time in the future as the Chinese working class, not the peasants, organizes itself)?

Just look at the historical development of capitalism. After the failure of the first (mercantile) capitalist revolution, that of Oliver Cromwell in England, a pro-capitalist could have said “well, that’s it, he didn’t make it so we’ll never get there. We‘ll never get beyond feudalism and the feudal relations of production. And boy, he was a really bad guy. Look at what he did in Ireland.” Capitalism didn’t get its next push, still mercantile capitalism of course, until the United Kingdom was formed in 1707 and then some years later began its mercantilist exploitation of the new colony in North America. Then for its truly big expansion it had to wait until the explosion of the Industrial Revolution and that itself took how many years after the first invention/discovery of the steam engine by James Watt? One failure, as big as it was, does not mean the end of history.

Last point. One other interpretation of the Soviet experience that I have thought of after reading the very interesting (and sympathetic) recent biography of Engels, Marx’s General, by Tristam Hunt, is that perhaps what happened in the Soviet Union was actually the stage of capitalist accumulation that Engels said Russia would have to go through before socialism could be successful there. After all, a capitalist-like ruling class, running the state apparatus as in State and Revolution (oh that Lenin, again) did eventually arise in the latter days of the rule of Brezhnev and his successors, becoming the open capitalists, the “Oligarchs,” (one of whom actually owns the Brooklyn (NY, USA) Nets pro basketball team) of current Russia. If looked at that way, the horrors of Stalinism, as bad as they were, don’t look so bad when compared with the horrors visited on their own peoples, the peoples of the colonial world by the capitalist imperialists, and the civilians caught in capitalist war, as capitalism proceeded to its maturity.

ABOUT THE AUTHOR
Steve Jonas’ protean output comprises many fields from book authorship (The 15% Solution, soon to be republished in a revised edition by Punto Press, and more than 30 other titles), to frequent political and historical commentary in many leading online venues including (Buzzflash/Truthout, TPJMagazine, Dandelion Salad, and of course, The Greanville Post. Jonas is also a Professor of Preventive Medicine at Stony Brook University (NY)

___________
(1) (M. Parenti, Left Anti-Communism, The Unkindest Cut, TGP, 1.12.12)  An extremely useful set of audio lectures by Parenti can be examined in our audio section, including his classic, “The Overthrow of Communism.”

Paying attention to—or ignoring—big events: In Darkness and Salmon Fishing in the Yemen

OpEds: Don’t vote, organise – the reasoning behind the slogan