Home AMERICAN BRAINWASH What is the Rules-Based Order?

What is the Rules-Based Order?

December 22, 2022 9 minutes read
Please share this article as widely as you can. 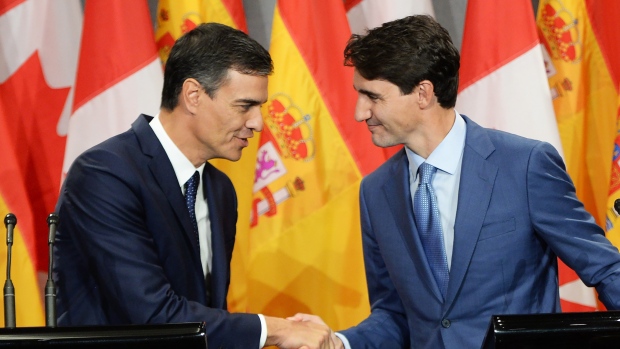 Vassal meeting fellow vassal: Pedro Sanchez, Spain's PM, shakes hands with Canada's Justin Trudeau. Their nations are no longer sovereign, but submission to the US-enforced "Rules-Based Order" does not seem to bother them.

In fits of, what might well be termed, masochism, some of us now-and-then tune in to the legacy media. When doing so, one is likely to hear western-aligned politicians rhetorize ad nauseam about the linguistically vogue rules-based order. Now and then, the word “international” is also inserted: the rules-based international order.

But what exactly is this rules-based order?

The way that the wording rules-based order is bandied about makes it sound like it has worldwide acceptance and that it has been around for a long time. Yet it comes across as a word-of-the-moment, both idealistic and disingenuous. Didn’t people just use to say international law or refer to the International Court of Justice, Nuremberg Law, the UN Security Council, or the newer institution — the International Criminal Court? Moreover, the word rules is contentious. Some will skirt the rules, perhaps chortling the aphorism that rules are meant to be broken. Rules can be unjust, and shouldn’t these unjust rules be broken, or better yet, disposed of? Wouldn’t a more preferable wording refer to justice? And yes, granted that justice can be upset by miscarriages. Or how about a morality-based order?

Nonetheless, it seems this wording of a rules-based order has jumped to the fore. And the word order makes it sound a lot like there is a ranking involved. Since China and Russia are advocating multipolarity, it has become clearer that the rules-based order, which is commonspeak among US and US-aligned politicians, is pointing at unipolarity, wherein the US rules a unipolar, US-dominated world.

An Australian think tank, the Lowy Institute, has pointed to a need “to work towards a definition” for a rules-based order. It asks, “… what does America think the rules-based order is for?

Among the reasons cited are “… to entrench and even sanctify an American-led international system,” or “that the rules-based order is a fig leaf, a polite fiction that masks the harsh realities of power,” and that “… the rules-based order can protect US interests as its power wanes relative to China…”

China is aware of this, and this is expressed in the Asia Times headline: “US ‘rules-based order’ is a myth and China knows it.”

The Hill wrote, “The much-vaunted liberal international order – recently re-branded as the rules-based international order or RBIO – is disintegrating before our very eyes.” As to what would replace the disintegrated order, The Hill posited, “The new order, reflecting a more multipolar and multicivilizational distribution of power, will not be built by Washington for Washington.”

The Asia Times acknowledged that it has been a “West-led rules-based order” and argued that a “collective change is needed to keep the peace.”

It is a given that the rules-based order is an American linguistic instrument designed to preserve it as a global hegemon. To rule is America’s self-admitted intention. It has variously declared itself to be the leader of the free world, the beacon on the hill, exceptional, the indispensable nation (in making this latter distinction, a logical corollary is drawn that there must be dispensable nations — or in the ineloquent parlance of former president Donald Trump: “shithole” nations).

Thus, the US has placed itself at the apex of the international order. It seeks ultimate control through full-spectrum dominance. It situates its military throughout the world; it surrounds countries with bases and weapons that it is inimically disposed toward — for example, China and Russia. It refuses to reject the first use of nuclear weapons. It does not reject the use of landmines. It still has a chemical-weapons inventory, and it allegedly carries out bioweapons research, as alluded to by Russia, which uncovered several clandestine biowarfare labs in Ukraine. This news flummoxed Fox News’ Tucker Carlson. Dominance is not about following rules, it is about imposing rules. That is the nature of dominating. Ergo, the US rejects the jurisdiction of the International Criminal Court and went so far as to sanction the ICC and declare ICC officials persona non grata when its interests were threatened.

Having placed itself at the forefront, the US empire needs to keep its aligned nations in line.

Thus it was that Joe Biden, already back in 2016, was urging Canada’s prime minister Trudeau to be a leader for rules-based world order.

When Trudeau got together with his Spanish counterpart, Pedro Sánchez, they reaffirmed their defence of the rule-based international order.

It is a commonly heard truism that actions speak louder than words. But an examination of Trudeau’s words compared to his actions speaks to a contradiction when it comes to Canada and the rule of law.

So how does Trudeau apply rules based law? [1]

Clearly, in Canada it points to a set of laws having been written to coerce compliance. This is especially evident in the case of Indigenous people. [2]

It seems Canada is just a lackey for the leader of the so-called free world.

One of the freedoms the US abuses is the freedom not to sign or ratify treaties. Even the right-wing thinktank, the Council on Foreign Relations lamented, “In lists of state parties to globally significant treaties, the United States is often notably absent. Ratification hesitancy is a chronic impairment to international U.S. credibility and influence.”

The CFR added, “In fact, the United States has one of the worst records of any country in ratifying human rights and environmental treaties.”

It is a matter of record that the US places itself above the law. As stated, the US does not recognize the ICC; as a permanent member of the UN Security Council, the US has serially abused its veto power to protect the racist, scofflaw nation of Israel; it ignored a World Court ruling that found the US guilty of de facto terrorism for mining the waters around Nicaragua.

The historical record reveals that the US, and its Anglo-European-Japanese-South Korean acolytes, are guilty of numerous violations of international law (i.e., the rules-based, international order).

When it comes to the US, the contraventions of the rules-based order are myriad. To mention a few:

The history of US actions (as opposed to its words) and its complicit tributaries needs to be kept firmly in mind when the legacy media unquestioningly reports the pablum about adhering to a rules-based order.

--
This communication may be unlawfully collected and stored by the NSA in secret.  The information contained in this email is confidential and is only intended for the party to who it is addressed. If disclosure is sought, please ask permission. Thank you.
ABOUT THE AUTHOR / SOURCE
Kim Petersen is an independent writer. He can be emailed at: kimohp at gmail.com.

What should we make of the latest Muppet show in DC?