Cat Stories: from tears to smiles 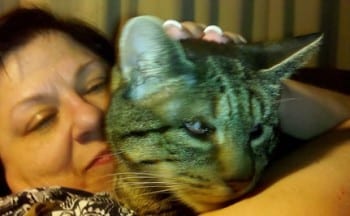 Editor’s Note: This post is a Care2 favorite. It was originally published on March 7, 2012. Enjoy!

Every animal I have ever had the pleasure of having in my life has been a stray taken from the streets.

One September day in 2009, a friend called me quite upset and told me that her granddaughter had began feeding a small stray cat who had shown up in her backyard. The cat seemed to be blind, and the other strays would “punk” this little cat out of its food and it was getting thinner and thinner despite the daily ration of tuna being offered. I asked her what made her think the cat was blind, and she replied, “because when she looks at you, there’s no eyes in the sockets.”

She had called Animal Control, and when the officer came and saw the cat, he didn’t want to touch it. He tried sneaking up the cat, and lowering a carrier over it, only succeeding in scaring the bejeezus out if it. The kitty ran head-long into the neighbor’s stockade fence, bounced off, squeezed under it and hid in the neighbor’s yard for two days. But knowing where the daily meal was coming from, it made its way back to my friend’s back porch.

“It’s getting cold at night, Jude. Can you please come and get this cat?” she said.

I arrived the next morning as the granddaughter went to the back porch and with tuna in hand and called, “Here, kitty kitty.”

With a tiny meow, out from under a clump of bushes came a small skinny little grey and black striped tabby. Sure enough, the eye sockets were just empty pink membranes. We sat quietly while the cat ate, then my friend’s granddaughter gently picked the little cat up and placed her in my carrier. A trip to my vet confirmed this tiny female was approximately two years old, spayed, dehydrated, malnourished, with infected anal glands, and yes, she had been born without eyes. She had also obviously been owned by someone, and after three weeks of extensive Lost and Found ads in numerous local publications without a response, she was mine.

Getting healthier and stronger by the day, she explored my house from top to bottom, me following her like a hysterical mama removing objects from her path. But she quickly got the hang of navigating the cellar stairs and the furniture legs, the jump to the top of the couch and, of course, the dog. Her meow is very sweet and musical, so I named her in honor of Stevie Wonder. She’s my snuggly little sweetie and I’m blessed to have her. 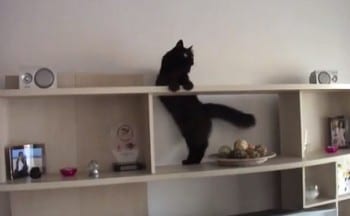 Felicia the kitty cat is determined to retrieve her toy from way up high. It’s a mission that seems impossible, but she’s not one to give up. Who would have thought that all that experience napping above the curtains would come in handy?