Published: April 29, 2014Last Updated on July 23, 2015 4 minutes read
The West’s Hypocrisy in Ukraine
“I’ve long been surprised at the tolerance for Western NGOs based in Russia and China. Imagine the reverse…” 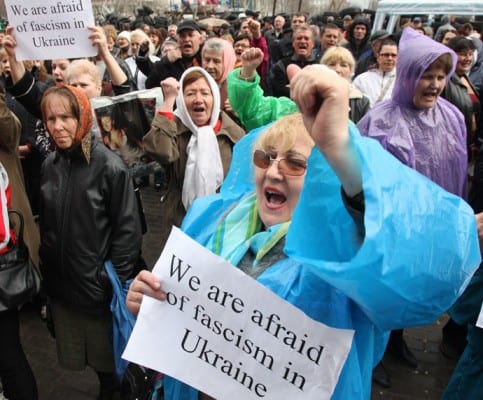 When it comes to Ukraine the US and the EU are adopting a holier than thou attitude which, unfortunately, leads them not to worship at the altar of truth.

Take the issue of the fuss made over alleged soldiers wearing Russian uniforms. They are not dressed in the smart fatigues of the unmarked Russian soldiers in Crimea, about which President Vladimir Putin has acknowledged he misled us.

What these soldiers, leading the Russian-speaking revolt, are wearing can be bought in any army surplus store. As for the photos Western intelligence has persuaded much of the media to use as evidence, they are hazy and would not be admissible in a court of law.

The Ukranian Security Agency announced that it captured 20 of its Russian counterparts. But then it reduced the number to 10 and then to 3.  But the last figure received much less highlighting from Western governments and media than the first.

The West isn’t innocent in this crisis

How all this “Russian interference” compares with the post Cold War expansion by Nato forces up to Russia’s borders, senior Western politicians’ (including the US ambassador) provocative support for a revolutionary movement that included a healthy contingent of neo-fascists who now have seats in the Ukrainian cabinet, and the funding of opposition forces and NGOs, is to be wondered at.

I’ve long been surprised at the tolerance for Western NGOs based in Russia and China. Imagine the reverse.

The West has no moral or legal capital

As for international law the US, the UK and France ignore it when convenient.

When in 1980 Iraq’s Saddam Hussein launched an invasion of Iran the US and the UK supplied him with weapons and military intelligence. When the US feared the World Court would find against it for mining the harbours of revolutionary Nicaragua it withdrew from the Court.

When Nato was intent on bombing Serbia and later Kosovo it bi-passed the UN Security Council although, according to the Charter, it is the only body that can legalise offensive military activity.

When the Security Council voted against the US, UK and France launching a second Iraq war they ignored its majority vote against.

When the West won a resolution, with Russian support, to protect civilians in the Libya of Muammar al-Gaddafi, it bent Security Council authority and did not stop air attacks until he was overthrown.

Kosovo and Crimea – the latter at least wasn’t bombed

The Russians were furious. Ironically, when most Western nations decided to recognise Kosovo as a state independent of Serbia against the wishes of Russia and even some EU members such as Spain, they gave a hostage to fortune. Russia is now able to say over Crimea we are only doing what you did over Kosovo.

The trouble with behaving like this is that international law and the Security Council don’t, like an elastic band, return to their original shape when stretched. So when it came to Crimea, where Russia was arguably in the wrong, many influential countries in the world, such as India, China, South Africa, Brazil and Israel kept silent and did not vote to back the Western condemnation. (Neither did they support Russia.)

Losing Russia through mismanagement of a crisis is not a very clever thing to do.

It means that there will be no more nuclear disarmament for as far into the future as one can see. Trade and financial exchange with Russia’s big and growing market will be hit by sanctions.

Nationalism in Russia, even among the intelligentsia, is rising fast. (Remember how, after 9/11, 80% of Russians supported the US.) Russia and China will become closer.

The US and the EU are shooting themselves in the foot. Former president, Richard Nixon, the author of detente, is presumably turning in his grave. He tried to persuade President Bill Clinton, gung-ho on expanding Nato to Russia’s borders, despite an American promise not to, to go easy.

President Barack Obama, after steering well clear of Clinton-type policy, now is in danger of being dragged down by a similar one. Is he downplaying the many ways Russia cooperates with the West?

Russia provides transport on its rockets to the International Space Station, which no other nation is capable of doing at the moment. It supplies engines to US space rockets. It cooperates with the West in combating Al Qaeda and the Taliban.

It has granted permission for US war materials en route to Afghanistan to use Russian trains. It has given its permission for overflying to Afghanistan. (Russia shares an interest with Nato in Afghanistan since it lost a million men in its own foolish war there.) Russian support is now needed in the next delicate stage of Nato withdrawal.

With Syria it persuaded Bashar Al-Assad to give up its chemical weapons and now has moderated its arms shipments.

Not least, it is a positive diplomatic force in pushing Iran to prove to the world community that it has no program to build nuclear weapons.

Does the West really want to lose Russia?

Jonathan Power is a columnist and associate at the Transnational Foundation for Peace & Future Research in Lund Sweden.