BOOKS: Point of No Return

Andre Vltchek’s ‘Point of No Return’

Reviewed by Ron Ridenour, This Cant Be Happening.net 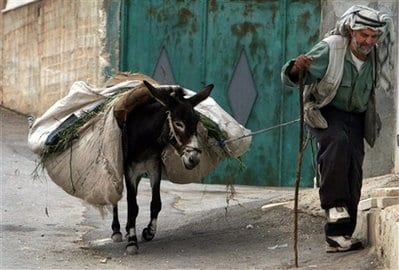 Point of No Return, a mixture of novel and autobiography, is an engaging story of an intrepid war correspondent who resembles a saucy crime detective. It is superb story-telling.

Andre Vltchek’s just re-released Point of No Return is a revised third edition. First published in 2005, the French edition was widely praised, with one French critic comparing the author’s writing with that of Malraux and Hemingway.

The hero is Karel, who has covered dozens of foreign wars and internal liberation struggles. Most of the book concerns Israel-Palestine and Latin America, especially Peru. Indonesia’s aggression against East Timor and Egypt also play important roles. There are also stops in Paris, New York and Japan.

The author has traveled to three-fourths of the world’s countries over two decades, communicating to whomever he can reach about the state of the world. He has written a score of non-fiction, fiction and poetry books. He is also a photographer and documentary film-maker.

The robust story flows rhythmically, sensually, enticingly. It is a sad reality that the veteran war correspondent encounters sometimes sickening things, which are just a reality of living and dying for three-fourths of the world’s seven billion people.

In Vltchek’s own words:

“Politicians and economists are blurring the whole picture…A small group of historically aggressive nations is still ruling the world. The economic system which it promotes has nothing to do with humanism, with solidarity, compassion, willingness to share. We have billions of people rotting in gutters all over the world; hundreds of millions of people dying from curable or at least controllable diseases. The rich world is still plundering the rest of the planet; stealing raw materials, employing people for a pittance…. If poor nations resist, the rich world stages coups or something worse…. And it is all legitimized through the United Nations, which was sidelined, made truly impotent…”

Point of No Return is also about how’s.

“Religion teaches submission. It has always been the best ally of the status quo. Almost any oppressive government or movement in the past and present has chosen religion as its pillar. It helps to decompose reason….religions feel they don’t have to prove anything. ‘You just have to believe,’ they say. Can any decent society be based on that?”

Karel understands that armed resistance to invasions is necessary, but at the same time, one should fight to win and not to die needlessly. With the advent of George Bush’s terrorist war on terror, wars of aggression follow one another from Afghanistan to Iraq and more countries on target. Many of the victims steep themselves in their religions and turn to fundamentalism.

“Religions gained ground, becoming the main anesthesia for the poor, a straw to which to cling…Intellectual freedom was frowned upon…The poets fell silent,” writes Andre, who is by no means anti-Muslim, but who rather opposes all forms of authoritarianism and totalitarianism.

“But in most of the rich countries, Orwellian indoctrination had been performed too – by the mass media which gradually accepted its submissive role as a propaganda machine, serving anonymous corporate masters instead of the public.”

Andre sets this scene from the start:

“A Palestinian man stood in the middle of a dusty road in Rafah refugee camp. Next to him stood his donkey. The man was old and so was the donkey. Israelis fired air-to-ground missiles from helicopters…Surrounded by hopelessness and despair, the old man and his animal seemed surprisingly calm. Both were too old to expect a better future.”

“I had come to learn and to see and to write, while he was here to stay.”

It is hard for the toughened reporter to feel other than despair as well.

“I was getting profoundly bored with wars. I had written and reported from every corner of the globe…Nothing changed.” “There was no particular place on earth where I desired to live…I had floated with no anchor, moving from place to place, free from all responsibilities except one – to be a witness to the insanity that was swallowing the world – to be a storyteller, to be where essential things were happening: to be myself.”

Born in post-WW II Leningrad, Andre grew up in East and Central Europe and, oddly enough, became a naturalized US citizen. He doesn’t explain his citizenship conversion but he admits feelings of schizophrenia toward USAmerica.

“I try to show America as I know it…It’s where I learned so much: good and bad…I am shocked by its performance in the world arena, by its compassionless social policies. I can’t live there, anymore, as it is becoming too controlled, too uniformed…On the other hand, there are so many things which I miss and admire there.” 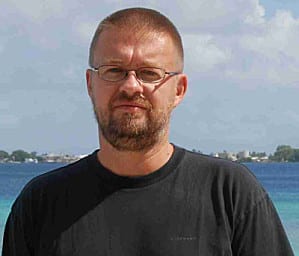 Andre misses US jazz and blues, the activism and the enthusiasm of many USAmericans.

“But it is so confusing….Americans live in denial, consuming stupid propaganda, advertisements, brainless films…. On the other hand, nowhere else have I met so many people that I can trust. I can still trust a person’s word or handshake there.”

This rapid-paced book can inspire as well. Andre shows that people can change that dismal reality, if they gather and fight.

At a few points in Vltchek’s exciting portrait of the character Karel the reader encounters an inconsistency, an incredulity or two. One example is his critique of how the mass media will refuse to cover the struggles of the oppressed people, yet then we’ll discover a horde of them when the national army, backed by the US, is about to massacre a liberation guerrilla force in “Todos los Santos,” somewhere in Latin America. Karel and his equally fearless colleague Moretti are with the guerrilla band for an exclusive story. They fear that the guerrilla leader, Felipe, who is also Karel’s friend, has failed to disperse his force in the best manner. Felipe asks Karel for his advice, which he gives. At that point the war correspondent has become a fighting tactician, and Felipe listens to him and adjusts his tactics somewhat. When the battle reaches the point of near annihilation for the liberationists, Karel and Moretti pick up weapons and wipe out several attackers, Hollywood style.

There is also the conflicted role of a fascistic Italian countess. As she plays the role of a tourist with the guerrillas, the events that occur are fantasy. But you must read for yourself what takes place.

Karel does find love with a Japanese woman, Reiko, an intelligent career woman, married and with a child. While Karel eagerly seeks her strong, giving love, he must remain in solidarity with the oppressed and invaded. Can he have both?

Buy this novel at:
Amazon Books [2]

Andre Vltchek is a novelist, filmmaker and investigative journalist. He has covered wars and conflicts in dozens of countries. His critically acclaimed political revolutionary novel “Point of No Return” is now re-edited and available. “Oceania” is his book on Western imperialism in South Pacific. His provocative book about post-Suharto Indonesia and market-fundamentalist model is called “Indonesia – The Archipelago of Fear” (Pluto). He just completed the feature documentary “Rwanda Gambit” about Rwandan history and the plunder of DR Congo. After living for many years in Latin America and Oceania, Vltchek presently resides and works in East Asia and Africa. He can be reached through his website. http://andrevltchek.weebly.com/

Ron Ridenour, born in “the devil’s own country,” is a veteran radical activist and journalist, and author of nine books—“Yankee Sandinistas”, “Backfire: The CIA’s Biggest Burn”; his latest is “Tamil Nation in Sri Lanka.” His website is: www.ronridenour.com.

A REMINDER: PUBLIC RELATIONS AND ADVERTISING ARE NOT JOURNALISM

Beware of Kicking the Dragon and Bear!