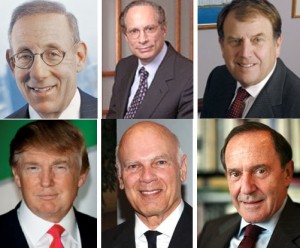 [T]he wealth of the world’s billionaires now stands at $7.3 trillion, an increase of 12 percent from last year, according to a new report released yesterday by Wealth-X and UBS. There are a record 2,325 billionaires in the world, up from 2,170 in 2013 and 1,360 in 2009, the first year following the financial collapse.

Billionaires make up 0.000033 percent of the world’s population, or, to put it in another way, there are about three million people for every one billionaire. Yet this exceedingly small social layer possesses about 4.5 times the total wealth of the bottom half of the population, or 3.5 billion people.

Some other comparisons help put these figures in perspective. The combined gross domestic product (the total value of all goods and services produced in a single year) for Sierra Leone and Liberia, presently wracked by an Ebola epidemic that could kill tens or even hundreds of thousands of people, is just under $7 billion—one one-thousandth of the wealth of 2,325 individuals.

The city of Detroit, Michigan, where workers are seeing their pensions slashed and their water service shut off as part of bankruptcy proceedings, has a budget deficit of some $330 million, which could be covered twenty thousand times over by the world’s billionaires.

The stock market and finance capital are the driving forces behind the wealth of the world’s billionaires. The top industry for billionaires, according to Wealth-X, is “finance, banking and investment,” which accounts for close to 20 percent of the total billionaire population, followed by industrial conglomerates at 12 percent and real estate at 7 percent. More than one in six billionaires resides in one of the world’s major financial capitals–New York, Moscow, Hong Kong or London.

Behind these figures lies a social relationship essential to the functioning of the capitalist system. The corporate and financial aristocracy has benefited from a massive redistribution of wealth, aided and abetted by the major capitalist governments and central banks. It is not just that enormous wealth stands side by side with enormous poverty, but the one is the direct product of the other.

As a result, American billionaires have seen their number grow by 57 over the past year. The country is home to the largest number of billionaires in the world (571), nearly 25 percent of the total global billionaire population and three times more than any other country.

At the same time, as the World Socialist Web Site has previously documented, incomes for the majority of the population have continued to decline. Between 2010 and 2013, the period of Obama’s “recovery,” average income for the bottom fifth of the population fell 8 percent, while the income of the top tenth of the population increased 10 percent, with the extremely wealthy reaping the bulk of these gains. The cash paid out to the banks is to be covered by the destruction of social programs and an historic reversal in the living conditions of the working class.

The response of the ruling class to the crisis has not only led to an explosive growth of social inequality, but has also created the conditions for an even more devastating economic catastrophe.

More perceptive media commentators have noted with concern the extraordinary disconnect between the surge in global stock markets and the state of the “real economy.” Writing in the Financial Times on Thursday, Jay Pelosky warned that “the state of the global economy resembles nothing so much as a soufflé on the brink of implosion.” He cited a number of warning signs: “The US consumer remains quiescent, dramatic increases in Asian debt levels preclude a robust economic recovery there, while Europe stagnates. Global demand remains inadequate.”

As stock markets continue to rise, economic forecasts are being downgraded. The Organization for Economic Cooperation and Development this week cut its projection for economic growth in all major economies in 2014 and 2015.

Among the billionaires themselves, there is growing concern. Sam Zell, the chairman of Equity Group Investments (net worth $4.8 billion), noted earlier this month that “the stock market is at an all-time, but economic activity is not at an all-time.” Zell said investors have “no place else to put their money, and the stock market is getting more than its share. It’s very likely that something has to give here.”

Not only are Wall Street investors simply buying up stocks, but corporations themselves are funneling record cash hoards back into the market, rather than increasing production. In the first half of this year, US companies bought back $338 billion of their own shares, more than any six-month period since 2007.

This is the real state of world capitalism: sustained by an unending stream of cash on the one hand and a relentless assault on the working class on the other; run by a financial aristocracy addicted to speculation; and headed toward another and even greater collapse.

The extremely precarious state of the economy and the parasitism of the ruling class that presides over it are the central factors behind the drive to both war and dictatorship. With no way out of the crisis of the profit system, the ruling class, led by the American financial aristocracy, turns increasingly to militarism abroad and repression at home.

Such are the measures employed by a ruling class that has reached an historic impasse. The international working class must counter with its own solution to the crisis: socialist revolution.

Joseph Kishore is a senior political analyst with wsws.org.