American Brainwash: Guess what, Ma, capitalism is not Americanness!

Published: November 21, 2017Last Updated on April 21, 2021 7 minutes read
Please make sure these dispatches reach as many readers as possible. Share with kin, friends and workmates and ask them to do likewise. 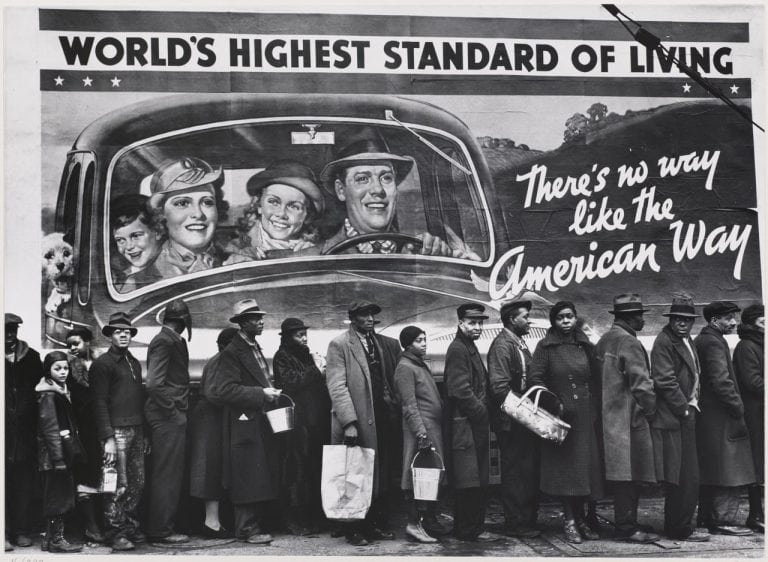 The American Way of Life by Margaret Bourke White (American, 1904–1971) 1937 Photograph. One of the most eloquent images laying bare the truth about capitalist "democracy" in the most savagely capitalist nation on earth.  © Museum of Fine Arts, Boston

Tracking the poisoned fruits of US exceptionalism

Virtually unchallenged to this day, corporate media are accustomed to using a number of misleading "cultural equations" to hide the existence of undemocratic institutions at the core of the American system. Thus, capitalism, a "hierarchic tyranny" as Chomsky calls it, is usually identified by its euphemisms: "Free Enterprise," "market system," "private enterprise." "the American Way," etc. Academia also cheerfully participates in this deliberate cosmetisation of what otherwise many people would begin to recognize as something unhealthy and malodorous in their midst. But of all these quaint labels and false equations the most outrageous and cynically deceptive is that which makes "Americanness"—the very national identity of the United States— identical with capitalism, both concepts one and inseparable.

Consistent with this practice, overt and pervasive partisanship in support of capitalism is not regarded by the American media as an ideological bias negating their vaunted professional "objectivity" but rather something akin to the serene acceptance of natural law. 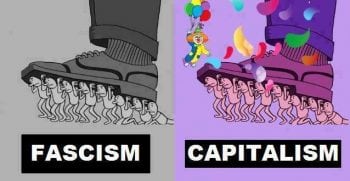 Yet, despite its currency, the idea that capitalism is synonymous with "Americanness" is as spurious as the equally widespread delusion that capitalism equals human nature, another fraud, we should hasten to point, bandied about by pretty much the same crowd of conservatives and free marketers.

It is surely anticlimactic to state it, but these myths have been deliberately injected into the American political consciousness by the system's mind managers.  Alex Carey, Herbert Schiller, Noam Chomsky, Ed Herman, Bob McChesney, and Michael Parenti, among other leading political scientists, have amply documented that such notions do not materialize out of thin air, that they are deliberately manufactured, and that a huge apparatus of propaganda is used to keep them in circulation.

[dropcap]G[/dropcap]reat political benefits can be reaped from this kind of sleazy political legerdemain. For by successfully equating loyalty to capitalism with loyalty to the motherland (a ruse that reminds us uncomfortably of another system that continually elevated loyalty to the motherland and its underlying supremacist system as sacred), the ruling orders can more easily whip up support and legitimacy for policies which chiefly safeguard their interests.

Did the French revolution deny the French some of their precious "Frenchiness"?

Besides invading the notion of "American nationhood," like a giant, Alien-like parasite, US capitalism has also embedded itself behind "freedom". One of its most popular deceiving masques, "the Free Enterprise System" exudes unconditional love for freedom. But is this so? The record again hardly supports such claims. For if "free enterprise" is so respectful of individual liberty and human rights, why does it thrive under Nazism? In the postwar world, US-style "free enterprise" also flourished (and flourishes) in dozens of nations that could be easily cataloged as dictatorships or outright tyrannies: Indonesia, Egypt, Saudi Arabia, Guatemala (an old example that also boasts genocide of its native people), Brazil, of course, with similar features, and many other countries marching to the tunes of the IMF and World Bank, and given political, diplomatic, propaganda, and military support by the US regime, regardless of White House occupant, as support for US imperialism is a fully bipartisan project. In this unsavory category, Gen Pinochet's Chile and his "Chicago Boys" still remains one of the best known examples of how undiluted libertarianism destroys a nation's economy, an economy which was already gravelly ill due to its long history of capitalist mismanagement.
.
The ploy has been particularly effective in the area of foreign policy, where the global interests of American business and the native plutocracy have long been sold to the public as those of the nation.

As anyone can easily infer, this has often served to silence and isolate critics, who have been thus conveniently smeared with the brush of disloyalty, suspicion, nuttiness or even treason. For dissidents, an informational ghetto has been created in America, partly to maintain the illusion that free speech still matters. In extreme cases, opponents of capitalism have been carted away under charges of "sedition," ingrates "intent on subverting the hallowed political system of the United States,'' and similarly dubious statutes and charges.

Given the success of these grand manipulations, there is little doubt that the American ruling class has carried the art of mass deception to truly unprecedented heights. No other western nation would have the audacity of requiring loyalty to capitalism--however camouflaged--as a prerequisite for good citizenship. Only in a nation where political illiteracy is high, and kept artificially that way  by the powers that be, can such a fraud be propagated without too much challenge or any challenge at all. Indeed, why should a historically transient system such as capitalism, one frequently suspect and deservedly despised by large numbers of people, be equated with the more enduring essence of the nation, itself an extraordinarily elusive and historically ephemeral concept? 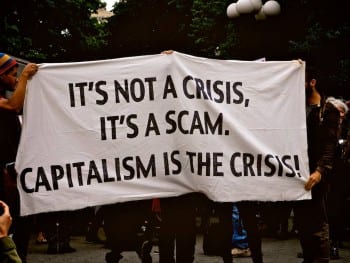 The fact that in the 21st century a cancerous capitalism is essentially eating away the very substance of the nation, a concept it finds narrow, inconvenient and outmoded to its compulsion for transnational depredation, does not reduce the need to dismantle this noxious myth, as it is still American capitalism, and its monstrous military muscle, that remains the linchpin in the imperialist global effort. It is capitalism's dynamic that feeds Washington's mad push for global supremacy at any cost, and it is capitalism again which stands to gain by imposing fascism on a semiconscious world.

The reigning fraud implicit in equating "Americanness" and "patriotism"—two very vague concepts to begin with—with loyalty to capitalism as essential to the good health of the American republic has seen vile eruptions that match anything found in openly fascist countries.  Consider, for example, the HUAC, which, incidentally, from beginning to end was largely staffed and piloted by Democrats. This is what the Wikipedia says. Note the damn committee, like all malignancies birthed by the US ruling class, from wars to persecutions at home, go on practically forever. In this case the HUAC lasted almost four decades, and many of its powers were then transferred to the House Judiciary Committee, where,  we assume, like any convenient ghoul, they rest but can be rapidly brought back to life to haunt new generations of social change activists.

The House Committee on Un-American Activities (HCUA), popularly dubbed the House Un-American Activities Committee (HUAC), and from 1969 onwards known as the House Committee on Internal Security, was an investigative committee of the United States House of Representatives. The HUAC was created in 1938 to investigate alleged disloyalty and subversive activities on the part of private citizens, public employees, and those organizations suspected of having Fascist or Communist ties. When the House abolished the committee in 1975,[1] its functions were transferred to the House Judiciary Committee. 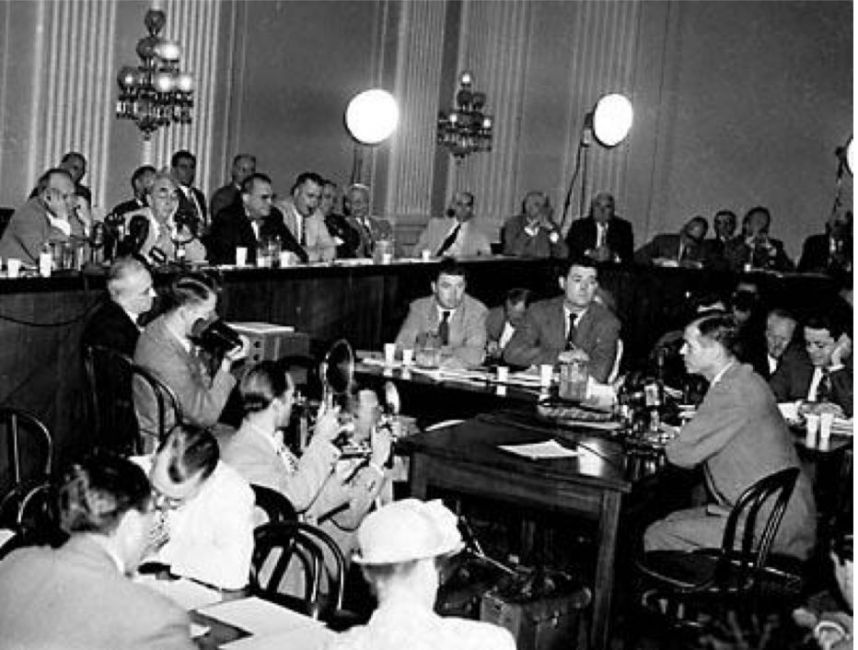 The HUAC in the 1940s conducting one of its infamous autos-da-fé. The purpose was to intimidate the population.

Since no one ever bothers to point the obvious, that capitalism and Americanness—whatever that is—are not the same thing,  and that such notion is merely a cynical political stratagem, we should stress for the record that the concept does not have the remotest iota of validity. And that even sixth-grade logic can prove it. In fact, here's a simple set of questions for capitalist propagandists:

• Will Americans be less "American" it they choose for themselves another social system?
• For that matter, were the Russians certifiably less  "Russian" after their October Revolution?
• Did the French revolution deny the French some of their precious "Frenchiness"?
• Are the millions of Italian communists less quintessentially Italian because they cherish Marx instead of Adam Smith?
• Are pro-Castro Cubans verifiably "less" Cuban than those living in exile?

The answers should be obvious to anyone with a modicum of common sense.

A pioneer in the field of political media analysis, Patrice Greanville is TGP's editor in chief. The above is an edited excerpt from the author's First Catalog of Media Biases / Whitewashing the Face of Capitalism (Cyrano's Journal, Premiere Issue, Fall 1982).

Right On, Patrice! And the American Way image is perfect.

Something about this equation (capitalism = Americanness) as promulgated by the capitalist megaphone, their media, always gave me heartburn but could not articulate the reasons why. Something smelled rotten. Mr Greanville has carefully pointed the sleight of hand and for that I’m grateful. Will share widely! Amazing how these things are floated about without any pushback from the sheeple.

And watch out ! Soon the Internet will be regulated by the servers. Which means that profit will demand censorship.
The information universe is shrinking fast to accommodate control by the nomenclature and their handlers .