The Donbass Cowboy: A War Journal by Russell Bentley

BOOK REVIEWS
A book review by Mike Kuhlenbeck
The Greanville

PostSeptember 4, 2018Russell Bentley’s debut book The Donbass Cowboy details the Texas-native’s adventures in fighting fascism in the Donetsk People’s Republic and is an important contribution in understanding the international struggle against fascism. From Dallas to Donetsk

Russell “Texas” Bentley arrived in Donetsk in December 2014. It would seem strange to some that an American would leave their homeland to fight for a cause on another continent. But the reasons become clear when examining the true story of the 2014 coup in Ukraine.

Starting in late 2013, The Euromaiden protests at Kiev City Hall and Independence Square were depicted by the media as a “democratic populist uprising” against government corruption. In the background were organized ultra-nationalist and Neo-Nazi militant groups, brandishing weapons to enforce their agenda. It wasn’t long before these groups emerged to the forefront of a takeover that ousted President Viktor Yanukovych and installed a regime embedded with butchers of the Far-Right.

Numerous attacks on civilians by the new government and Neo-Nazi streets gangs ensued. Among the tragedies was the mass murder of anti-Nazi protesters at the Odessa House of Trade Unions, where hundreds of civilians were burned alive on May 2, 2014. The perpetrators of this terrorist act have never been brought to justice.

According to Bentley, he was shocked by the events unfolding in Kiev, Odessa and Donbass. “I was outraged by what I saw and also felt a personal responsibility as a US citizen, because there can be no doubt that the phony Maiden coup would never have happened without US backing and direction.”

The US Government did not merely cheer on the coup from the sidelines, but provided support via NGOs (Non-Government Organizations) and planning from the CIA. Since then, the US has been providing financial and military aid to the current regime.

Risking his life, Bentley left Dallas and travelled to Donbass to defend the Donetsk People’s Republic (DPR) and join those fighting against the terror being unleashed by the US-backed Kiev regime. Soon after he arrived, he came in contact with international volunteers who joined the fight.

Such efforts beckon to the time of the Spanish Civil War when volunteers from around the world came to the aid of the Spanish Republic against Francisco Franco’s fascist foot-soldiers. This anti-fascist coalition included Americans who fought in the Abraham Lincoln Brigade (1936-39).

Using some of his past training in the US Army, Bentley made his mark as a soldier and as an Information Warrior in what he calls “Fascism’s first major setback since the withdrawal from Vietnam or its stagnation in Afghanistan,” and now invites readers to discover his story.

The Donbass Cowboy is, in Bentley’s words, a “view from the trenches” as well as a “labor of love, and a point of honor.” Based on Bentley’s journal chronicling his experiences on the frontlines, the author describes in vivid detail his first year of fighting for the DPR. From the time his plane landed, he knew his life would never be the same.

These “memoirs of an un-civil war” is reminiscent of Ernesto “Che” Guevara’s The Bolivian Dairy and follows the journalistic footsteps of John Reed’s Ten Days That Shook the World and Anna Louise Strong’s I Change Worlds. Written in a clear prose style with a poet’s touch, Bentley presents readers with a history that is still in progress.

Despite the calm manner in which his narrative is presented, it remains an urgent call to action. 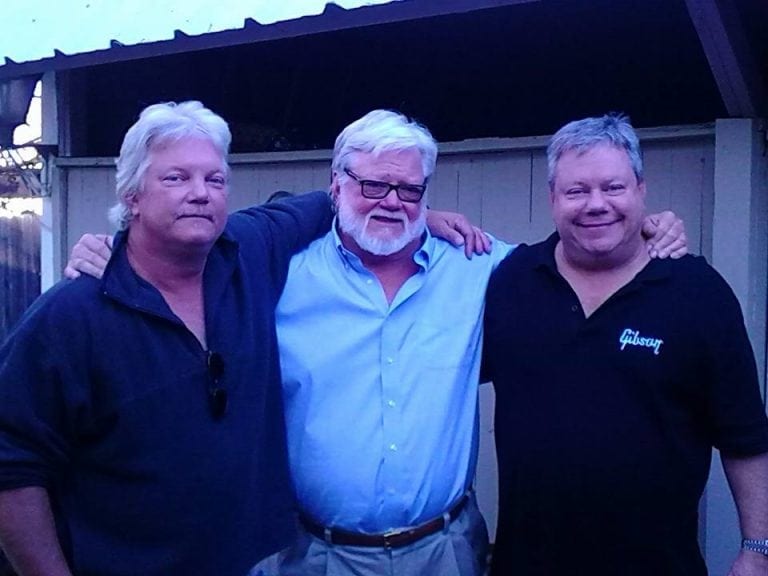 Russell (left) with kin, during a visit back home.

In the book’s introduction, editor Pete Nash describes his astonishment toward the lack of balance in reporting from the western media establishment on the civil war raging in southern Ukraine.

“At one time, it was the role of journalists to challenge power,” Nash writes. “Now I was witnessing not just lies by omission. It was barefaced propaganda.”

Nash rightly praises Bentley’s book for providing “valuable insight into the Donbass resistance,” for it is among the only accessible English-language offerings dispelling the lies directed against resistance efforts.

As US leaders in Washington D.C. decry so-called “Russian Interference in the 2016 election,” they revel in their own hypocrisy for meddling in the affairs of numerous countries with Ukraine being a recent “prize” collected for their bloody mantle.

The Donbass Cowboy, like most reports countering propaganda oiling the gears of the war machine, has been ignored by the American press. As Nazis and variant nationalist groups terrorize Ukraine, the DPR and the Lugansk People’s Republic fight for the lives of their people.

As Bentley writes, “As an Information Warrior, my words have reached around the world, and the truth is a powerful weapon. And the truth is something that each of us can stand up and defend.”

“YOU CAN GET A COPY OF “THE DONBASS COWBOY” BY GOING TO DONBASS HUMAN AID WEBSITE, CLICKING ON THE DONATE BUTTON AND CONTRIBUTING $10 (OR MORE IF YOU CAN). PLEASE WRITE “BOOK” AND ADD YOUR EMAIL ADDRESS. THE BOOK WILL BE SENT VIA EMAIL WITHIN 48 HOURS. PROCEEDS FROM THE BOOK GO TOWARDS CONTINUING OUR WORK IN DONBASS, WE ARE NOT SELLING ON AMAZON OR OTHER CAPITALIST OUTLETS. SO WE DEPEND ON OUR COMRADES TO SUPPORT OUR WORK, BUY THE BOOK, AND SPREAD THE WORD.”

About the author
Mike Kuhlenbeck is an investigative reporter  working for anti-imperialist publications.

How US Government Relies on Lying Media

COULD THE LATEST OUTBURST OF ANKARA’S TEMPER LEAD...

Syria – Aleppo Is Fully Liberated But The...