Media silent on dismissal of DNC suit against Julian Assange 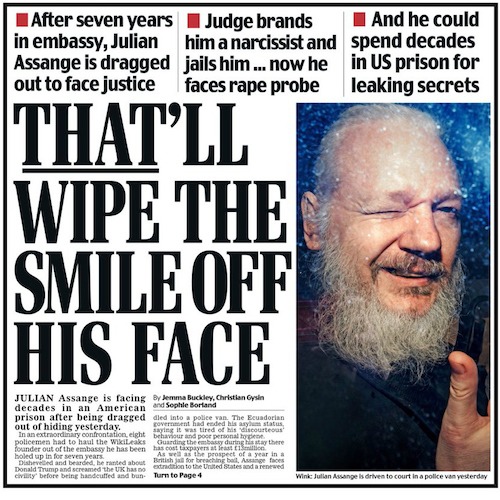 The American media has been abominable in the matter of Assange, but the British media's scurrilous attacks and rejoicing upon his incarceration have been even more vile and open in their contempt for real press freedoms.

A federal court ruling last Tuesday dismissing a Democratic National Committee (DNC) civil suit against Julian Assange “with prejudice” was a devastating indictment of the US ruling elite’s campaign to destroy the WikiLeaks founder. It exposed as a fraud the entire “Russiagate” conspiracy theory peddled by the Democratic Party, the corporate media and the intelligence agencies for the past three years.

The decision, by Judge John Koeltl of the US District Court for the Southern District of New York, rejected the smears that Assange “colluded” with Russia. It upheld his status as a journalist and publisher and dismissed claims that WikiLeaks’ 2016 publication of leaked emails from the DNC was “illegal.”

Despite the significance of the ruling, and its clear newsworthiness, it has been subjected to an almost complete blackout by the entire media in the US and internationally.

The universal silence on the court decision—extending from the New York Times (which buried a six-paragraph report on the ruling on page 25) and the Washington Post, to “alternative” outlets such as the Intercept, the television evening news programs and the publications of the pseudo-left—can be described only as a coordinated political conspiracy.

The New York Times, the Washington Post and other corporate outlets have relentlessly smeared Assange as a “Russian agent” and depicted him as the linchpin of a conspiracy hatched in Moscow to deprive Democratic Party candidate Hillary Clinton of the presidency in the 2016 US elections.

Its aim is to suppress any discussion of the court’s exposure of the slanders used to malign and isolate Assange, and to justify the unprecedented international pursuit of him over WikiLeaks’ exposure of US war crimes, surveillance operations and diplomatic conspiracies.

The New York Times, the Washington Post and other corporate outlets have relentlessly smeared Assange as a “Russian agent” and depicted him as the linchpin of a conspiracy hatched in Moscow to deprive Democratic Party candidate Hillary Clinton of the presidency in the 2016 US elections.

Now that their claims have been subjected to judicial review and exposed as a tissue of lies and fabrications, they have adopted a policy of radio silence. There is no question that if the court ruling had been in favour of the DNC, it would have been greeted with banner headlines and wall-to-wall coverage.

The response exposes these publications as state propagandists and active participants in the campaign by the Democratic Party, the Trump administration and the entire ruling elite to condemn Assange for the rest of his life to an American prison for the “crime” of publishing the truth.

The editors and senior writers at these outlets, such as New York Timeseditorial page editor James Bennet, are in constant contact with the CIA and other intelligence agencies. Behind the scenes, they work out an editorial line that will advance the interests of the Wall Street banks and the military-intelligence apparatus. At the same time, they decide what news and information they will hide from the American and world population.

The efforts by the mainstream news outlets to bury the ruling presents a clear example of the type of media manipulation that has led millions of people to seek alternative sources of news on the internet, of which WikiLeaks is itself an example.

Judge Koeltl’s decision made plain the anti-democratic and dictatorial logic of the DNC case against Assange. He warned: “If WikiLeaks could be held liable for publishing documents concerning the DNC’s political, financial and voter-engagement strategies simply because the DNC labels them ‘secret’ and trade secrets, then so could any newspaper or other media outlet.” This, he stated, would “override the First Amendment” protection to freedom of the press mandated by the US Constitution.

Koeltl’s finding was an absolute vindication of Assange and WikiLeaks’ 2016 publications exposing the attempts by the DNC to rig the Democratic Party primaries against self-declared “democratic socialist” Bernie Sanders in favour of Hillary Clinton.

The judge found these releases, together with the publication of Clinton’s secret speeches to Wall Street banks, in which she pledged to be their representative, were “matters of the highest public concern.” They “allowed the American electorate to look behind the curtain of one of the two major political parties in the United States during a presidential election.”

Koeltl, moreover, found there was no evidence to justify the DNC’s assertion that WikiLeaks had colluded with the Russian state to obtain the material. Assange and WikiLeaks have always maintained that the documents were not provided to them by the Putin regime.

The ruling demonstrated the flagrant illegality of the US vendetta against Assange. The slander that he was operating as a “Russian agent” to “interfere” in US politics was used by the American government and its intelligence agencies to pressure the Ecuadorian regime to sever Assange’s internet access in 2016, and again in 2018. It served as a central pretext for its illegal termination in April of his political asylum in the embassy building.

The judgment was also an implicit exposure of the lawlessness of the attempts by the Trump administration, with the full support of the Democrats, to extradite Assange from Britain, so that he can be prosecuted on 18 US charges, including 17 espionage counts, carrying a maximum sentence of 175 years’ imprisonment.

The Trump administration and the Justice Department are claiming that it was illegal for WikiLeaks and Assange to publish US army war logs from Iraq and Afghanistan, hundreds of thousands of diplomatic cables and other documents exposing US war crimes and intrigues, provided by the courageous whistleblower Chelsea Manning.

Koeltl’s ruling, however, reasserted the fundamental democratic principle that WikiLeaks had a right to publish the 2016 DNC documents, even if they had been obtained by the Russian government, or any other entity, illegally.

The clear implication is that even if Manning’s decision to leak US military and diplomatic documents was a violation of the law, WikiLeaks’ publication of them was not. The publication of both the 2010 and the 2016 leaks was constitutionally protected journalistic activity.

Koeltl further undermined the claims of the Trump administration, the Democrats and the media that Assange is a “hacker,” undeserving of First Amendment protections. The judge repeatedly referred to Assange as a “journalist” and WikiLeaks as a “publisher.”

In other words, the attempt to extradite Assange to the US and prosecute him is a frontal assault on the US Constitution and press freedom. In its disregard for domestic and international law, it can be described only as an extraordinary rendition operation, similar to the kidnappings and torture operations conducted by the CIA.

The hostile response to Koeltl’s ruling on the part of the entire political and media establishment, in the US and internationally, demonstrates that this conspiracy will not be defeated by plaintive appeals to the governments, political parties and media corporations that have spearheaded the assault on Assange’s legal and democratic rights.

All of them are using the persecution of Assange as a test case for the imposition of ever-more authoritarian measures, aimed at suppressing mounting popular hostility to war, social inequality and an assault on democratic rights.

What is required is the development of a mass movement from below, to mobilise the immense social and political power of the working class internationally to secure Assange’s liberty and to defend all democratic rights.

To take forward this critical struggle, the WSWS and the International Committee of the Fourth International last month called for the formation of a Global Defence Committee to free Assange and the courageous whistleblower Chelsea Manning. All workers, young people and supporters of democratic rights should contact the WSWS today to take up the fight to free Assange and Manning!

ABOUT THE AUTHOR
Oscar Grenfell writes for wsws.org, a Marxian publication.