Home LIFE UNDER CAPITALISM With People in the Streets Worldwide, Media Focus Uniquely on Hong Kong

With People in the Streets Worldwide, Media Focus Uniquely on Hong Kong

December 10, 2019 7 minutes read
Please make sure these dispatches reach as many readers as possible. Share with kin, friends and workmates and ask them to do likewise. 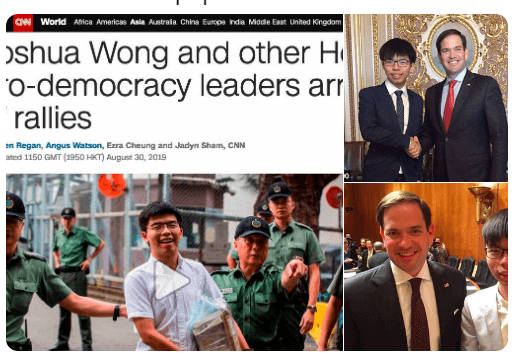 CNN: Joshua Wong and Other Hong Kong Pro-Democracy Leaders Arrested Ahead of Rallies. The US media and western allies have not exactly hidden Wong's links to the US hybrid war machinery behind Hong Kong's troubles.

[dropcap]U[/dropcap]nlike protests against US client states, the Hong Kong demonstrations were frequently given the approving “pro-democracy” label (CNN, 8/30/19).

2019 may be remembered as the year of the protest, as demonstrations are engulfing the world. From the Yellow Vests in France to demonstrations in Lebanon, Gaza, Chile, Ecuador and Haiti, sustained movements all over the planet have taken to the street demanding change. Yet US corporate media have been disproportionately interested in only one: the Hong Kong protests.

As FAIR argued previously (FAIR.org, 10/26/19), this disparity in coverage can largely be explained by understanding who is protesting and what they are protesting against. The unrest in Hong Kong flared up in March in response to a proposed extradition treaty between the island city, the Chinese central government and Taiwan, which many residents feared would be used by Beijing authorities to arrest and persecute opponents of the Chinese state. Thus, the target of Hong Kong’s protesting is an official enemy of the US, hence the extent and favorability of the coverage.

FAIR conducted a study of New York Times and CNN coverage of four important protest movements around the world: Hong Kong, Ecuador, Haiti and Chile. Those outlets were chosen for their influence and their reputation as the most important, agenda-setting outlets in the print and television media. Full documentation, including links to all articles in the sample, can be found here. All relevant results to “country+protests” on those outlets’ websites were counted, except purely rehosted content, since each protest began. This was March 15 for Hong Kong, October 3 for Ecuador, October 14 for Chile and July 7, 2018, for Haiti. The end date for the study was November 22, 2019. 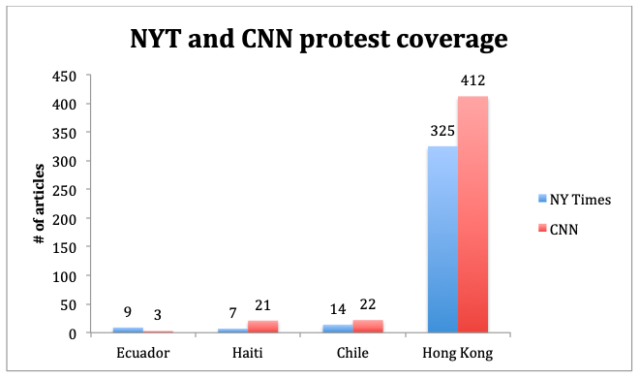 Protest stories in the New York Times and CNN through November 22, 2019.

In total, there have been 737 stories on the Hong Kong protests, 12 on Ecuador, 28 on Haiti and 36 on Chile. As the graph illustrates, both the Times and CNN had similar ratios of coverage. 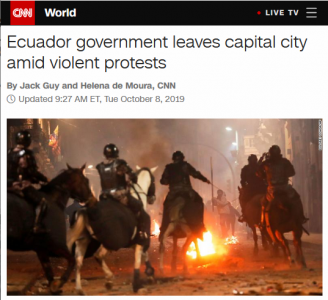 CNN: Ecuador government leaves capital city amid violent protests
CNN devoted only two stories to the protests in Ecuador, in which eight people were killed.
This enormous disparity cannot be explained by the other protests’ size or significance, nor the severity of the repression meted out by security services. After barely a week’s worth of turmoil, the death toll in Ecuador was eight, according to that government’s own Human Rights Defender, while the UN confirms that 42 Haitians have been killed in the last two months alone. And in Chile, where right-wing President Sebastian Piñera literally declared war on the population, sending tanks through the streets, 26 have died and over 26,000 have been arrested. In contrast, no one has died at the hands of the Hong Kong security forces, although one protester died after falling from a building, and a 70-year-old man was killed by a brick thrown by protesters, both deaths occurring in November after months of demonstrations.

Of course, the protests in Chile and Ecuador started well after Hong Kong, so it would be unwise to compare the totals directly. But even taking that into account, the disparity is still enormous; during the hottest moments of the Ecuador crisis (October 3–14), the New York Times ran six stories covering it, CNN three. This is in contrast to 33 and 38 articles on Hong Kong over the same time period. And since the beginning of the Chilean protests (October 14), while the Times has covered the event 14 times and CNN 22, the two news organizations ran 59 and 92 articles on Hong Kong, respectively.

Meanwhile, the Haitian protests have been raging for twice as long as Hong Kong, yet the coverage of the far more deadly repression on the Caribbean island has been minute in comparison, with Hong Kong receiving more than 50 times the total attention Haiti has.

However, the quantitative difference, while great, actually undersells the disparity of the coverage in a number of important ways. Firstly, many Ecuador and Chile stories were not focused on events in those countries, but were merely “protests around the world” roundup articles, with barely a sentence or two about events (e.g., New York Times, 10/23/19; CNN, 11/3/19). In fact, CNN has run a total of only two stories (10/8/19, 10/13/19) focused mainly on the events in Ecuador. In contrast, the great majority of the Hong Kong stories were dedicated to events on the island city-state, and articles that merely mentioned the protests, such as CNN’s report (11/13/19) about the decline in the Asian stock market, were not included in the count towards the Hong Kong total. Meanwhile, almost half of CNN’s Haiti coverage (e.g., 2/16/19, 2/18/19) centered on US citizens affected in some way by the upheaval. 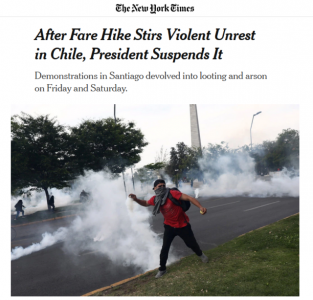 This sort of language is rarely used with regards to the Hong Kong protesters, even when it is arguably more applicable. In addition to widespread property damage and the aforementioned bricking of a retiree, protestors recently doused another elderly man in flammable liquid and set fire to him on camera. He spent more than ten days in a coma.

The New York Times (11/17/19) used passive voice to describe protesters shooting an arrow through an officer’s leg: “A police officer was hit in his leg with an arrow” as “activists resisted” the police onslaught to “suppress them,” it told its readers. Times reporters also describe seeing the rebels producing “hundreds or thousands of bombs” they were going to use. Despite this, the paper continued to describe the militants as “pro-democracy activists.”

Perhaps most worryingly, CNN (11/17/19) shared an image of a homemade gas canister-sized bomb, not unlike the one used by Dzhokhar Tsarnaev at the Boston Marathon, except much larger. CNN also noted it received confirmation that protesters had already used these bombs against police. If, for instance, Black Lives Matter or Antifa had killed passers-by, shot police or created Tsarnaev-style bombs, would they be called “pro-democracy demonstrators,” as both CNN (11/22/19) and the New York Times (11/22/19) have continued to do for those in Hong Kong?

Corporate media has glossed over many of the more unseemly details of the Hong Kong protests to continue the simple narrative of lauding the “democracy-minded people of Hong Kong,” fighting for freedom against the repressive “Communist authority” of Beijing, as the New York Times editorial board (6/10/19) puts it.

The quantity of Hong Kong articles is inversely proportional to the diversity of opinion. The reality of the situation is much more nuanced, but this nuance is entirely lacking in the hundreds of articles sampled. Corporate media sing the same song on Hong Kong, presenting the situation in a lockstep single-mindedness that would impress any totalitarian propaganda system.

About the Author
Alan MacLeod @AlanRMacLeod is a member of the Glasgow University Media Group. His latest book, Propaganda in the Information Age: Still Manufacturing Consent, was published by Routledge in May 2019.

Preparing the Stage: A Flawed Prospectus for War, This Time With Iran