It is a well-known fact that in the imperialist game the UK often acts as a willing sub-contractor.

November 1, 2022 24 minutes read
Please make sure these dispatches reach as many readers as possible. Share with kin, friends and workmates and ask them to do likewise.

Marine drone used by the Ukronazis to attack Russian ships in Crimea. Note detonators on the prow. The guidance system is probably the most sophisticated part of the contraption. The British are supplying Kiev with more advanced models.

I am a big fan of John LeCarre. I especially enjoyed the TV series put together by the BBC based on LeCarre’s novels–Tinker Tailor Soldier Spy and Smiley’s People. The books are better, but anything featuring the droll Alec Guinness is worth watching. LeCarre’s true gift is his ability to reveal through his stories the craven, soul-crushing, inept bureaucracy that rules British intelligence.

The fecklessness of the Brits, especially its intelligence operatives, is nothing new. But it takes on greater importance in light of recent news implicating the Brits in the sabotage of the Nordstream pipelines and the failed air and sea drone attacks on Russia’s Black Sea Fleet in Sevastopol. The Brits are behaving a bit like a sex crazed school boy desperate to experience intercourse but, due to excess enthusiasm and carelessness, is incapable of finding a happy ending.

Let me start with the Nordstream debacle. Why anyone in the United States or the United Kingdom leadership would think destroying Germany’s primary source of natural gas was a terrific idea is prime evidence of the incompetence and shallowness that governs decision-making in the black world of intelligence. Many thought it strange that in the relative immediate aftermath of the Nordstream attack, former Polish Foreign Minister, Radek Sikorski jumped into social media and implicated the United States as the culprit

Why would Sikorski do such a thing? Some argue that he genuinely believed it to be true. But other evidence suggests that Sikorski was playing his part to divert attention from British culpability. Turns out that Sikorski is quite cozy with key British political, mililtary and intelligence figures:

Sikorski arrived in Oxford in 1982 and played the part of the English gent. “He was more English than the English,” says one contemporary, journalist Rachel Johnson. He had excellent English, well-tailored suits and even a penchant for bow-ties. He earned himself the nickname “Radish” and hung out with Gottfried von Bismarck.

The young Pole was swept into the Bullingdon Club — the drinking club that Cameron would also join a few years later — by the future Mayor of London (i.e. Boris Johnson).

Bullingdon Club is all male and exclusive. The poor need not apply. The fact that Johnson and Sikorski share this bond is not a mere coincidence. Some, until today, could argue that this connection has nothing to do with managing messaging on the Nordstream attack. Then this news broke courtesy of Hal Turner:

When the Nord Stream Pipelines began to blow up, Russian natural gas firm GAZPROM got alarm bells from sensors in the pipeline, indicating the pressure had dropped massively and suddenly.   GAZPROM then knew the pipes were ruptured.

The computers at GAZPROM, which recorded the minutes/seconds the sensor alarms went off, all use Coordinated Universal Time (UTC) for the time stamps.

Exactly one minute after the alarms went off at GAZPROM, iCloud records of Prime Minister Liz Truss iPhone, show that she used her iPhone to send a text message to Antony Blinken, US Secretary of State.   The message:   “It’s done.”

The iCloud computers also use Coordinated Universal Time for message time stamps.  So although Russia and the UK are in different time zones, UTC proves that it was literally ONE MINUTE after the GAZPROM pressure sensor alarms went off, that Liz Truss sent her text message to Blinken.

No one else knew the pipelines had been blown up.  GAZPROM knew there was a problem, but didn’t know what or why.

Because it was the British government that carried out the bombing.

This news comes less than 48 hours after a failed aerial and maritime drone attack on Russia’s Black Sea Fleet at Sevastopol. 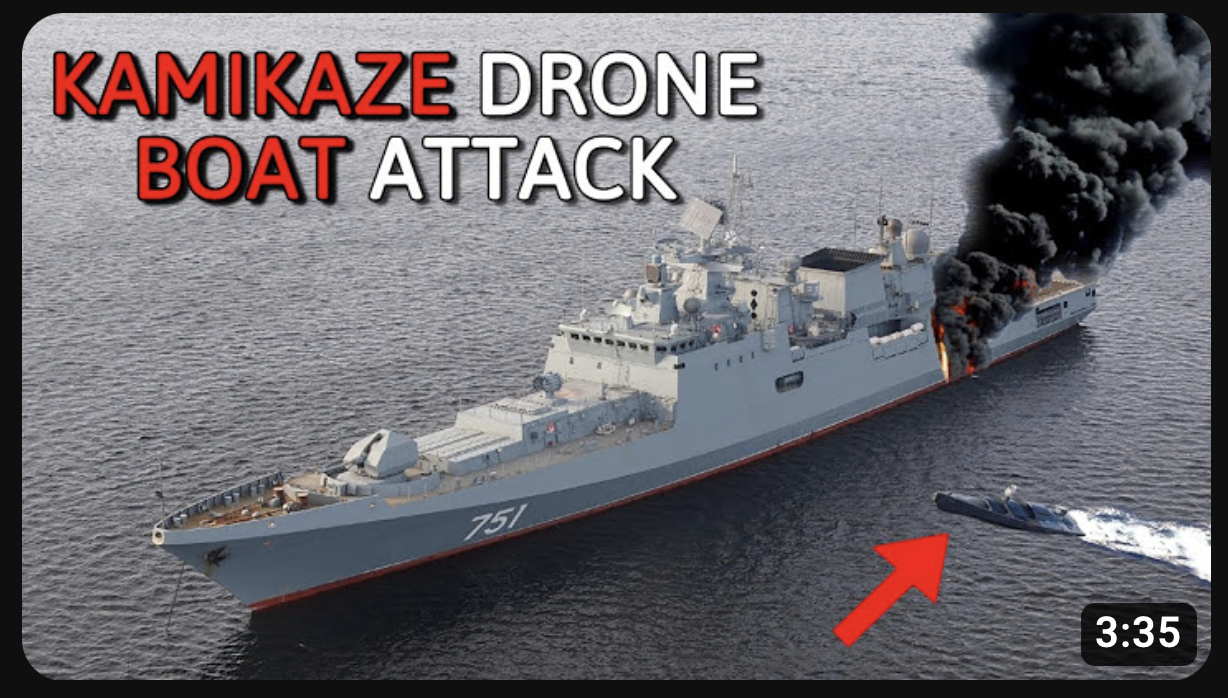 The attack was carried out by UAVs and remotely piloted surface vehicles over the waters of Sevastopol Bay, Sevastopol’s governor has said.

“The preparation of this terrorist act and the training of the Ukrainian 73rd Special Maritime Operations Centre was carried out under the supervision of British experts based in the city of Ochakov in the Mykolayiv region of Ukraine,” the ministry said in a statement.

The photo and video shows one of the unmanned boats. A similar one was used in today’s attack.

The Brits have been supplying and training the Ukrainians with maritime drones since late August:

And here is some video evidence of the delivery:

The Russians got their hands on one of the surface drones as it tried to attack Russian ships and recovered the following video. You can see the splashes from Russian fires trying to stop the drone. It is not clear how the Russians captured the footage:

Russia is keeping its powder dry in terms of retaliating with force against the Brits outside of Ukraine. However, Russia did bomb the base where they believe that members of the British Navy trained and prepped the drone attack. On the diplomatic front, Russia cancelled all further grain shipments from Ukraine under a deal brokered originally by the United Nations. If the suspension is permanent, the end of grain exports is widely considered a gut punch to the European Community.

Russia will present evidence against the Brits on Monday before the U.N. Security Council. I think the Russians realize this is a fruitless pursuit in terms of getting the Security Council to punish the United Kingdom. But it does allow Russia to demonstrate its commitment to international law, take the high road and expose the hypocrisy of the West to the rest of the world when it comes to terrorism. Vladimir Putin’s eye is on recruiting more countries into his vision of a multi-polar world free of Washington’s dictates.

One final point regarding burgeoning relations between Russia and Turkey courtesy of an old friend who did great service with the Navy SEALS:

The question in my mind is how Turkey (a NATO member), who has provided naval security for the grain corridor shipments, will react to Russia’s navy should Russia now take an offensive posture towards Turkey or the ships they are escorting.

One more point to ponder. Russia doesn’t have the naval capacity to enforce closure of the Black Sea. Think about this angle – there’s only one strait in and out of the Black Sea and that’s largely controlled by Turkey and to a lesser extent, Greece. It passes through a number of fortified islands and the route is circuitous requiring navigation speeds and caution so grounding doesn’t occur. If Russia gets too frisky, all Turkey needs to do is close the gate (strait) and Russia’s navy is caught in a bottle neck shooting gallery, i.e., the Black Sea. And, closing the strait is done easily, at low risk and low cost. Lot’s of very subtle what if’s here, but Russia stands to lose more than anyone else if they play their hand poorly.

I think this gives all you smart people a lot of grist to chew on. Put on your analyst hat and fire away.