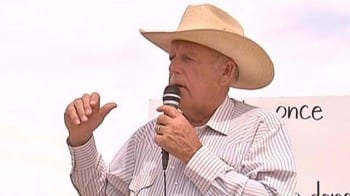 Cliven Bundy: Richa rancher that should know better. Public lands means you can’t use them to enrich yourself without compensating the commonwealth, you idiot.

I mean, if you really look at the facts of the case at the heart of his dispute with the Bureau of Land Management over grazing fees he’s refused to pay for the last 20 years – Cliven Bundy has long enjoyed the benefit of Federal Resources without actually meeting the requirements for access to those resources.

The issue has been litigated in court, more than once, and Bundy has lost each time on the merits of his case. He is NOT ENTITLED to access to this land. It doesn’t belong to him.  In fact that land Belongs to ME and to every other citizen of the United States.  That’s MY Land that his cows have been grazing on for 20 years and he OWES ME and the rest of the American People for it.

Cliven Bundy is a God Damn [Corporate] Benefits Dead Beat and a THIEF.  He’s a Moocher!  A Lazy Taker!. He should pay the frack up, or else face jail.  I mean isn’t that how all those good Americans on Fox News like Eric Bolling are constantly telling us about people who Improperly take Federal Benefits!  Just listen.

What makes Cliven Bundy any different from all the guys who go out and buy Weed, Booze and Lap Dances using an EBT Card? [Never mind the fact that if you can get cash via E.B.T., you can legally spend it on anything you like!] If they should be strung up by the heels for ripping off the American Public, why shouldn’t he? I mean, seriously.

And now the Feds, due to the increasing threat of violence involving Militia groups has backed off from their Cattle Roundup, tucked their tails between their legs, packed their bags and headed home.

BUNKERVILLE, Nevada (Reuters) – The U.S. Bureau of Land Management on Saturday said it had called off an effort to round up a rancher’s herd of cattle that it had said were being illegally grazed in southern Nevada, citing concerns about safety.“Based on information about conditions on the ground and in consultation with law enforcement, we have made a decision to conclude the cattle gather because of our serious concern about the safety of employees and members of the public,” BLM director Neil Kornze said in a statement.

The showdown between rancher Cliven Bundy and U.S. land managers had brought a team of armed federal rangers to Nevada to seize the 1,000 head of cattle.

Do you think for one second that if Wilma the (Imaginary) Welfare Queen who has five different personal IDs, 3 Social Security Numbers and 2 Luxury Hybrids in her driveway from collecting hundreds of thousands per year in Federal Benefits (Food Stamps, General Relief, Medicare & Disability) were not only to Refuse to Pay it Back when caught and convicted, but then would go out and get her buddies and pals (Clearly, Gang-Bangers for sure, uh huh!) to bring Guns (AK-47s and 9’s baby!) to defend her against Federal Officers, that the first thing we’d hear about that situation was how many charred bodies were pulled out of the burning house after the FBI  S.W.A.T. Team (Who are known as H.R.T.) knocked down the walls with a battering ram?  There YOU are. HIGH!  As far as I’m concerned, this is nothing like Ruby Ridge or Waco, which were disputes – an arrest warrant and a search warrant respectively – that started up over violations of Federal gun charges.  This isn’t a gun rights issue, nor is it a religious freedom issue.

Let’s face it, the reason the Militia is ginned up about this isn’t because of ‘Merica, or ‘FREEDUM’, it has to do with decades long case of affluenza. Bundy is a 1 Percenter, so he’s admired for his thieving from the public coffers, while Wilma would rot in H.E. Double Hockey Sticks after being riddled with 12 gauge buckshot.

It doesn’t matter if some people feel that Bundy is “justified” in his path because of Harry Reid’s alleged Chinese/Solar Power Deal or whether the Koch Bros AFP are using this dispute to attack the BLM and gobble up more and more public land for Oil Drilling and Fracking.  The former maybe a totally bogus excuse ginned up to accomplish the later – but it doesn’t matter.

WE. DESERVE. OUR. MONEY. BACK.

What Bundy hasn’t paid to the Feds is exactly the same a stealing. What he hasn’t paid for using Federal Property has gone into his pocket after being snatched from the pocket of every tax payer.  The same is true of private companies that refuse to pay for public lands for drilling, that refuse to pay for the use of public facilities for their for-profit charter schools, and that park their assets overseas to avoid paying their fair share of taxes to America where they made their money in the first place.  They’re ALL Thieves and Corporate Welfare Cheats.  They either skirt the laws, or they manipulate and deform them to their own selfish benefit, causing the rest of us to pay instead.

Now some may make the extraordinary claim that Federal Land Management that was setup through the westerns states as a result of the Civil War are invalid because those states who Lost the War were put under undue duress.  They “couldn’t negotiate a fair deal with a Gun to their Heads“, therefore these fees are invalid or unconstitutional or icky, or something.

I mean, that argument has totally, completely, absolutely, FAILED in court – but let’s just take the point for a moment.

If that premise were valid, then it would also be true that the land negotiations that took place as a result of the duress of the Mexican-American War should also be considered null and void for similar reasons.  If we were to assume that then Bundy’s problems with the Federal Government would be over because if that were the case, the states of New Mexico, California and Nevada – wouldn’t be PART of America, they’d still be considered portions OF MEXICO, and he wouldn’t be in this stand-off with the BLM, it would be with the Mexican Federales.

I think that under those circumstances, Bundy would properly prefer to take his chances with the BLM than his fellow “legitimate businessmen” like say – El Chapo! – I’m just saying.

OpEds: Animal Activists are All Reformists