In his writing, a true “Prince/President” has to appear “compassionate, faithful, humane, religious” without actually being any of these things. He should go to Cairo to tell Muslims they have a beautiful faith, yet address them in a way only a colonialist could do, using Arabic words to thrill them, a sort of Ich bin ein Berliner in Middle Eastern Sauce….   Machiavelli insisted that the only real force of a State is in an extremely well-armed military, solid and faithful to its leader.

Deceiving the public is at the heart of modern governance 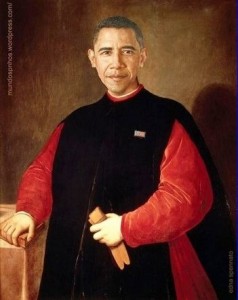 Any means to the end is, in essence,  a Machiavellian  political tactic and President Obama has become a subtle master of this political strategy ~ whereas, as noted Machiavellian Henry Kissinger once said, in the world of politics perception becomes far more important than reality.

Machiavelli originally wrote Il Principe (The Prince) (1513) in hopes of securing the favor of the ruling Medici family, and he deliberately made its claims provocative, and that they are ~ ” Machiavelli argued that it is primarily the character or vitality or skill of the individual leader that determines the success of any state. The book surveys various bold means of acquiring and maintaining the principality and evaluates each of them solely by reference to its likelihood of augmenting the glory of the prince while serving the public interest. It is this focus on practical success by any means, even at the expense of traditional moral values, that earned Machiavelli’s scheme a reputation for ruthlessness, deception, and cruelty.” http://www.philosophypages.com/ph/macv.htm

Writer Mary Rizzo makes the same analogy in her brilliant post Hail to the Prince: Obama, the paradigmatic Machiavellian Leader written on March 4, 2010 ~ ” What you “are” and how you are “perceived” is a fascinating topic. It is dealt with mainly in sociology and psychology, but someone very important in the history of thought had a great deal to say about it regarding politics and power .. Machiavelli’s got something of a reputation, evidenced by the fact that his name has become an adjective with largely negative connotations, not really merited, in all honesty. What makes it even more entertaining is that the most scandalous part of his theoretical writing was the analysis of “reputation”, and the necessity of the leader of a State to manipulate the idea and the perception others have of him in order to carry out actions that have as the goal consolidation and maintenance of his own power… In his writing, a true “Prince/President” has to appear “compassionate, faithful, humane, religious” without actually being any of these things. He should go to Cairo to tell Muslims they have a beautiful faith, yet address them in a way only a colonialist could do, using Arabic words to thrill them, a sort of Ich bin ein Berliner in Middle Eastern Sauce….   Machiavelli insisted that the only real force of a State is in an extremely well-armed military, solid and faithful to its leader. Clashes and wars are born out of will to power and desire to control ever greater territories, conquest, in other words, not for abstract principles, though the abstract principles get the consensus required by a democracy.”

Now let’s note two recent events which show how the use of the Machiavellian principles of Perception versus Reality rule in the Obama Administration .

During his late March surprise six hour Afghanistan Photo Op Drop-In ~ President Obama assured his captive military listeners, and most assuredly Americans at home, that we will “finish the job” and made another promise as well: “I’m looking forward,” he told the troops, “to returning to Afghanistan many times in the years to come”  thus contradicting another promise to the American people about withdrawal by 2011 but reinforcing his image as the consummate War President at the expense of the vast majority of Americans who want us out of Afghanistan.

But as columnist Courtland Milloy reported in the Washington Post on April 6th ~ ” So President Obama made another surprise visit to a war zone ~ this time to Southeast Washington for Easter services at Allen Chapel AME. But instead of addressing the battle-weary congregation, as he did with the troops in Afghanistan last month, Obama fell curiously silent…. The president neither spoke nor shook hands, didn’t wave or even turn around in his pew to smile at the 700 or so churchgoers who began arriving as early as 3 a.m. to see him .. In Afghanistan, Obama thanked U.S. soldiers and civilians for their efforts to “keep America safe and secure ” but  in Southeast, Washington ~ Obama sent up a private prayer and, with a veritable army of Secret Service and D.C. police officers protecting his motorcade, beat a hasty retreat back to the White House.” http://www.washingtonpost.com/wp-dyn/content/article/2010/04/06/AR2010040600538.html

Machiavelli would be proud of his new disciple ~

Allen L Roland is a practicing psychotherapist, author and lecturer who also shares a daily political and social commentary on his  weblog and website allenroland.com He also guest hosts a monthly national radio show TRUTHTALK on  www.conscioustalk.net

The Courts Can’t Take Away Our Internet

FOOTBALL WAS CHINA’S NATIONAL SPORT FOR MILLENNIA. WHY...

My Response to Bill Clinton: On (My) Liberty...

“China will react if provoked again: you risk...

The Liberal-Left Divide: A Conversation With Margaret Kimberley

FOOTBALL WAS CHINA’S NATIONAL SPORT FOR...