Trusting liberals is a fools’ errand: The case of MSNBC’s Ed Schultz

By J.A. Myerson. Republished from FPIF.

We Are All Neocons Now

Or the Perils of Trusting a Duplicitous President Too Much 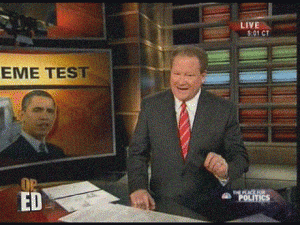 Schultz: Blind adherence to the Democratic Party always made him suspect of being an Obamaniac of the worst sort.

As American bombs rain down death and destruction on an Arab nation, a prominent cable news host proclaims, “The president of the United States…deserves the benefit of the doubt and our support in his decision to use military force” because “this is all about democracy.” Readers would be forgiven for faintly hearing those words in the voice of Fox News’s Bill O’Reilly, but would be wrong: it’s MSNBC’s Ed Shultz, writing for the Huffington Post.

Schultz’s employment of tortured logic, misdirection and arrant nonsense is all that seems liberal about this piece; it’s enough to make a body suspect that Schultz’s breathless opposition to the Bush Administration’s foreign policy was borne not of policy principle but partisan hackery.

The deficiencies are manifold and obvious.

Schultz’s confidence in the mission is primarily inspired by the President’s claim that “this won’t be a long-term operation. Matter of days, not a matter of weeks. Not even months.” Perhaps Mr. Schultz would have been kind enough to cite a single example of an American military action that was only as long as its executing President advertised at first. We’ve still got troops in Germany and Korea, and of course our nation-building adventures in Iraq and the former Yugoslavia began as internationally implemented no-fly zones the U.S. supported. Indeed, the President himself has already admitted to having punked Schultz, confessing that this will be a longer engagement than previously announced.

Schultz’s support for the mission is additionally bolstered by its alleged early success. Writes Schultz, “Since we started this mission, Gaddafi hasn’t been killing civilians, his own people.” How he squares this assertion with reports like Reuters’ that “Gaddafi tanks move in again on besieged Libyan city,” his readers are left to wonder. One possibility is that Schultz hasn’t encountered such reports, which implicates him in lousy journalism and irresponsible writing. Another is that he has but won’t say so, which implicates him in conscious mendacity and irresponsible writing.

On the mendacity question, Schultz contends that his support for the war is animated by President Obama’s consistent honesty. “There have been no lies told, no fear games played on the American people by President Obama and his administration.” To Schultz, Obama’s description of 50,000 troops engaging in counter-terror and security missions as the end of combat missions in Iraq indicates a commitment to openness and honesty. Equally forthright was his campaign-era admiration for whistle-blowers (Their “acts of courage and patriotism” should be “encouraged, rather than stifled”) in light of his administration’s treatment of Bradley Manning. Or is it the President’s rabid escalation of the war in Afghanistan (and its expansion over the eastern border into Pakistan, where civilians are routinely killed by secret and illegal drone attacks) that gives Shultz the impression that the Obama foreign policy team is upstanding and trustworthy?

Rather than presenting a case for the invasion, Schultz takes the opportunity to ridicule the Republicans’ critique of it. “Why?” he invites us to ask, “Because he didn’t do it their way? He didn’t go far enough? He actually had a coalition?” It should be said from the outset that, even if the Republicans’ complaints were the stupidest imaginable, that still would not constitute an argument for the wisdom and righteousness of the policy. As it happens, however, they are anything but.

Speaker Boehner, in his letter to the President (PDF), echoes Schultz’ sentiments about the moral defensibility of the action, writing, “The United States has long stood with those who seek freedom from oppression through self-government and an underlying structure of basic human rights.” But among his concerns, Boehner cites his anxiety that “military resources were committed to war without clearly defining for the American people, the Congress and our troops what the mission in Libya is and what America’s role is in achieving that mission.”

Now, perhaps Schultz knows whether Obama wants regime change, a properly observed ceasefire, a partition of the country or merely a change in the Libyan revolution’s momentum in favor of the revolutionaries, but I don’t, and I don’t see how Mr. Boehner’s concern is illegitimate. He asks Obama to detail the mission, the command structure, the policy goals, the length of America’s engagement in the coalition, the projected cost, etc. Which of these does Schultz find Boehner – and the rest of us – unworthy of knowing? That these are the words of an obvious hypocrite (who cares not a whit for these answers in the cases of Iraq and Afghanistan) does not make them wrong or not worth addressing.

No more does the fact that there is a more fulsome coalition attending to the Libyan intervention than did the Iraq one testify to the policy’s rectitude, and as Schultz surely knows being in the minority of many issues, appeals to consensus almost always conceal a sloppy analysis. What but a sloppy analysis would allow Schultz to criticize the GOP, apparently unironically, for having “steamrolled America into two wars” in the same breath as he defends the president who has steamrolled America into a third – readers with a keen memory may recall that the first war was unanimously approved by both congressional houses apart from Rep. Barbara Lee (CA) and the second one on an only slightly less bipartisan basis. So much for a steamroll. By contrast, there hasn’t even been a vote on the Libya matter. Not even a debate.

Schultz already concedes too much by affirming the right of the U.S. to make war in a sovereign nation, claiming humanitarian grounds. Empires always cloak themselves in noble language when moving to attack other countries – the invasion is for civilization or freedom or democracy or human rights. If Schultz can be suckered into supporting a war by the empty promises of a deceitful president, what can’t he be made to do?

The answer seems like it’s: agree with Republicans. Even when they’re right.

J.A. Myerson, Executive Editor, is the Artistic Director of Full of Noises and a teaching artist with Urban Arts Partnership. He writes primarily on American Politics and Human Rights. Follow him on Twitter.

Chris Hedges: The Collapse of Globalization