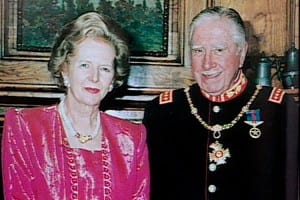 Ask anybody from Santiago about the noise heard in the Chilean capital’s skies on the morning of Sept. 11, 1973, and they will probably tell you about the screeching roar of the British Hawker Harrier jets as they bombed La Moneda. Within minutes the planes had set fire to the presidential palace. After the air attack on the president’s offices, Chile’s army, directed by Augusto Pinochet and a group of generals, stormed the building. President Salvador Allende died in the attack.

Britain had been supplying all branches of the Chilean military with arms even under Allende, the democratically elected president ousted by Pinochet, who was his defense minister. In 1973, with British matériel and more than a nod and a wink from the CIA, a more than century-old Latin American democracy fell to authoritarianism. Pinochet stayed in power from 1973 to 1990 and sustained friendly, special relations with London and Washington, D.C., even as concerns about human rights abuses mounted.

In 2013, the anniversary year of Pinochet’s coup, Britain is aggressively refreshing its ties to Chile’s military establishment. From May 28-30, Chile’s defense minister visited London for annual bilateral defense discussions. Earlier in May, a 15-member delegation of military and civilian security and defense officials from 11 countries came to Chile on a “study tour” organized by Britain’s Royal College of Defense Studies with the support of the UK Embassy in Santiago. Chile’s defense minister welcomed the group. In late July and early August, “academics” from the British Army’s college at Sandhurst traveled to Santiago to train students from Chile’s defense institutions in counterinsurgency techniques.

There’s no secret to Britain’s current ties to Chile’s military: the British government has advertised these visits on the Foreign and Commonwealth Office website, stating that counterinsurgency training “was organised as part of the ongoing efforts to reinforce and strengthen the close ties between the British and Chilean Ministries of Defence.

[pullquote] Let’s not forget that it is British arms merchants and manufacturers that benefit from such linkages. [/pullquote]

Chile is an ever-present reminder to the West of the excesses of Cold War anti-communism. Pinochet seized power for the country’s capitalist establishment and labeled his leftist antagonists violent extremists. Pinochet did not shirk from calling his opponents terrorists and subversives. The dictator governed Chile through terrifying presidential rule from 1973 until 1990. A million people went into exile, tens of thousands were tortured, and thousands died or disappeared without a trace, often in the allied causes of counterinsurgency, counterterrorism or anti-communism.

In the 1980s, Margaret Thatcher and Pinochet strengthened their special relationship. Thatcher offered staunch support, staving off criticism of the general’s human rights abuses since he shared information to help defeat the Argentine generals who in 1982 attacked Las Malvinas/Falkland Islands. Thatcher had supported Pinochet when she came into office after her landslide victory against the Labour Government in 1979. Thatcher dropped the de facto arms embargo imposed by British parliamentary leftists in reaction to the human rights abuses after the 1973 coup. 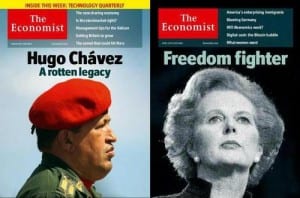 The capitalist media’s Orwellian view of the world. The POV of the ruling class.

British support for Pinochet never waned, even with Thatcher out of office and New Labour elected to government in 1997. A year after Tony Blair’s victory, London police arrested Pinochet to face extradition to Spain. While under house arrest, the ex-prime minister, since elevated to Lady Thatcher, visited him at a rented mansion house in Surrey, a leafy west London suburb. The BBC reported that Thatcher thanked Pinochet on behalf of the British people, saying “I know how much we owed to you for your help.” Thatcher extolled the former dictator for “bringing” democracy to Chile.

Britain’s current support for Chile’s military attracts attention because Santiago’s law-and-order establishment have been criticized for heavy-handed repression against student protesters, and for using anti-terror legislation to permit violence against the indigenous community of Mapuches. In Santiago on July 30, British academics from the UK’s Army Officer School presented a counterinsurgency course to participants drawn from Chile’s military. By coincidence, also on July 30 in the capital, the United Nations Special Rapporteur on Human Rights and Counter-Terrorism expressed concern over the “confused and arbitrary … misuse” of Chile’s counter-terrorism legislation that had “resulted in real injustice” against the country’s Mapuche indigenous people. The state had met Mapuche land protesters with violent repression, some of them detained and imprisoned as terrorists.

U.N. Special Rapporteur Ben Emmerson, a British human rights barrister, concluded his two-week country visit to Chile in July with the statement that the Carabineros (its gendarmerie, a type of police belonging to Chile’s army) and investigative police had violently abused the Mapuche using Chile’s anti-terror legislation. The Special Rapporteur confirmed that these crimes by state agents remained unpunished. The U.N.’s counter-terrorism and human rights expert recommended a “new independent investigation body” regarding the “excessive violence” by the state under the anti-terror legislation against the Mapuche land protesters.

The British counter-insurgency courses included 20 students from Chile’s military establishment. According to the Foreign and Commonwealth Office’s press release these students came from the Chilean Ministry of Defense, the National Intelligence Agency, the Carabineros and all three branches of Chile’s military. Chile is, as one British Foreign Office minister said in March 2012, “a long-standing friend of the UK.”

The democratic transition has not calmed Chile’s politics, or restored complete faith in state institutions. Films, literature, music, scholarly studies and Chile’s left-wing student protest movement all demonstrate that the country has never reconciled itself to the coup and the subsequent 17 years of authoritarianism. The country remains divided between the Right and the Left, in spite of official truth commissions that account for past excesses of torture, political imprisonment and disappearances at the hands of Pinochet’s military government. Human rights activists and observers have long criticized Chile’s judiciary for its ongoing sympathy to Pinochet-era human rights abusers.

The UK Coalition Government’s present support for Chile’s military seems willfully ignorant of the history of the effects of a special relationship forged 40 years ago in the crucible of the anti-communist coup. Pinochet left office in 1990 but the wounds inflicted on Chilean society have never healed. Over the past two decades Chile has attempted to transition from dictatorship to democracy. Chile’s democratic governments have signed up to human rights treaties, but the legacy of abuses and impunity persist, creating deep divisions within Chile. The Chilean state continues to abuse human rights, as the U.N. Special Rapporteur on Counter-terrorism and Human Rights has observed – he will present a full report on Chile in 2014. Britain has ignored the consequences of its role: the United Kingdom government has never been forced to reflect on its support for Pinochet, all the while cozying up to Chile’s defense establishment.

Patrick Timmons is a writer, human rights journalist, and language teacher with a PhD (2004) in Latin American History from the University of Texas at Austin. From 2011 to 2012 he was the Human Rights, Migration, and Security Policy Officer at the British Embassy in Mexico City where he reported for the UK’s Foreign and Commonwealth Office on a wave of killings of journalists in the Mexican Gulf state of Veracruz. He is finishing his first book Plucking the Plumed Serpent: A Memoir of Madness and Sensibility in North America. He divides his time between Mexico City and Colchester, England.

U.S. Attack on Syria will be a Historic Crime