Home ACTIVISTS & HEROES If Bolivia Bans Use of Animals in Circuses, Why Not US?

If Bolivia Bans Use of Animals in Circuses, Why Not US?

THIS IS A REPOST BY READER REQUEST
Bolivia showed the way, what are other nations waiting for?
And why is the UNO not taking up the lead in this field? 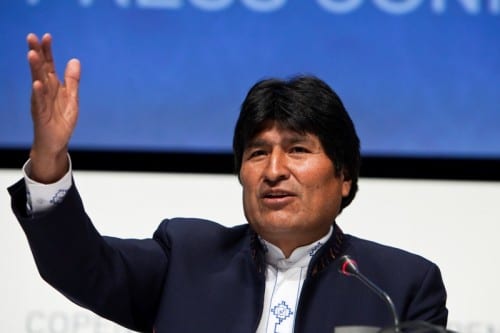 [A]nimal Defenders International (ADI) is delighted that Bolivia’s President Evo Morales has signed a new law to end the use of wild and domestic animals in travelling circuses.

BELOW: Rescuing Tillin (a Mandrill) from a lifetime of confinement.

After a successful passage through the Congress, the Bill passed the final hurdle, awaiting the President’s signature, and the new Act is expected to be published in the following weeks.

The law, tabled by Congresswoman Ximena Flores of Potosi, arose as a result of evidence gathered during a disturbing undercover investigation by ADI that included: lions confined in a tiny cage on the back of a truck (two were pregnant but continued to perform); a mandrill confined in a tiny cage; three brown bears kept in tiny compartments measuring just 2.5x3m, inside a cage on the back of a truck ¬– their only exercise was the walk to and from the ring for their short performance. Lack of safety barriers were noted, as the animals were made to dance, play dead and ride a bicycle. The findings of the investigation were presented to the Congress together with ADI’s report on the scientific evidence of suffering of animals in travelling circuses, ‘The Science on Suffering’.

The new law bans the use of wild and domestic animals in circuses in the Bolivia, as their conditions and confinement it is considered an act of cruelty. The circuses will be allowed one year to adapt their shows to a humans-only programme and during this time, the government will issue regulations on confiscation and pecuniary sanctions for any breaches of the law.

This is the first national law to ban the use of both domestic and wild animals in circuses. So far, similar bans on animal use in travelling circuses in Austria, Costa Rica, Finland and Denmark only prohibit the use of wild animals or certain species. In recognition of President Morales’ stand on the issue and his government’s prompt action, ADI has presented the Bolivian government with the Toto Award on animal protection and conservation.

ADI Chief Executive Jan Creamer, “This is a truly historic day for circus animals. The undercover investigations, the scientific research and the hard work of our supporters in Bolivia has made a difference for animals that will reach around the world. Bolivia is the first country to ban animal circuses in South America and the first worldwide to ban both domestic and wild animals in circuses. We applaud the President Evo Morales for setting the highest standard for animal protection for South America, which the rest of the world now needs to follow. We also salute the efforts of Congresswoman Flores and all the local organizations and who along with ADI worked tirelessly to ensure that the bill became a law.”

The groups in Bolivia who worked alongside ADI on the campaign for the new legislation include:
FOCOMADE, VIDA SILVESTRE, BIOSFERA, CODAC, ZOOPRAMA, ANIMA
NATURALIS-BOLIVIA, GAIA PACHA, EBA-BOLIVIA, ANIMALES SOS (La Paz y Santa Cruz) amongst others.

Animal Defenders International (ADI)
With offices in London, San Francisco and Bogota, ADI campaigns to protect animals in entertainment, replacement of animals in experiments; worldwide traffic in endangered species; vegetarianism; factory farming; pollution and conservation. ADI also rescues animals in distress worldwide. Our evidence has led to campaigns and legislative action all over the world to protect them.

The situation in the USA: The Animal Welfare Act
Notes by Russell Meade (8.4.2009)

[I]n the United States circuses are generally regulated as exhibitors. The Animal Welfare Act requires circuses to be licensed and subject to periodic inspections by the USDA’s Animal and Plant Health Inspection Service (APHIS). The regulations, 9 CFR 1.1, 2.4, 2.131, Subpart D 3.75-.92, and Subpart F 3.125-3.142, however, provide only vague, very minimal standards for keeping animals for exhibitions. The focus of the few regulations is public or worker safety and disease prevention.  Cages in which animals are housed 24/7 are permissible.  For example, 9 CFR 3.128 requires only an “[e]nclosure…. constructed and maintained so as to provide sufficient space to allow each animal to make normal postural and social adjustments with adequate freedom of movement.”

Also, there are few APHIS inspectors for the thousands of animal exhibitors including circuses and zoos, as well as other businesses using animals that are supposedly regulated by AWA, research facilities and commercial pet breeders. And, many APHIS inspectors are simply not adequately trained in the care and handling of wild animals.

The AWA regulations do not apply at all to birds, reptiles or other amphibians. Nor do they apply to horses and ponies used in many circuses.

The AWA does not have any specific qualifications or regulations for caregivers or trainers who handle circus animals.  The AWA prohibits “physical abuse“, but it is not clear what that means. 9 C.F.R. 2.131 There are no regulations prohibiting the use of bullhooks, prods, whips and other such devices. How many times can a lion or elephant be hit or prodded before it constitutes “physical abuse“? And, anyway, who will know about and stop the physical abuse?

The only other AWA regulation really touching on handling and physical treatment of the animals cautions against causing “trauma, overheating, excessive cooling, behavioral stress, physical harm, or unnecessary discomfort.” This is no explanation of these terms or what behavior or handling should be avoided.

The regulations state that “[y]oung or immature animals shall not be exposed to rough or excessive public handling or exhibited for periods of time which would be detrimental to their health or well-being.” Does this mean adult animals can be so handled? 9 C.F.R. 2.131

The regulations ban use of drugs and otherwise state “[a]nimals shall be exhibited only for periods of time and under conditions consistent with their good health and well-being.” 9 C.F.R. 2.131 The behavior by a circus operator or employee that would violate this provision is anyone’s guess.

Check out USDA/APHIS inspection reports for exhibitors including circuses now online here.  Keep in mind there are hundreds of pending complaints that have been filed by others against circuses.

There are a hodge podge of state laws that attempt to protect circus animals from some abuse.

Florida, Fl. Stat. §877.16 prohibits the exhibition for pay or compensation “any crippled or physically distorted, malformed, or disfigured beast, bird, or animal in any circus”.

Wisconsin, Wis. Stat. § 951.07, prohibits the use of “a bristle bur, tack bur or like device; or a poling device used to train a horse to jump which is charged with electricity or to which have been affixed nails, tacks or other sharp points”.

Unlike the AWA, Alaska has a law that specifically addresses the use of elephants in exhibitions including circuses. A permit is required to “possess, import or export” an elephant. The facilities for the elephant must be such that the animal can be maintained in “humane conditions“. Alaska Stat. § 16.40.060.

Many state laws that even mention circus animals do so only to say they are exempt from prohibitions against display or exhibition of wild animals or use of them to solicit money, in advertising, as prizes or for entertainment.

The Washington, D.C. code does exempt circuses from restrictions but states the Mayor retains the authority to restrict the movement of any prohibited animal into the District and the conditions under which those movements are made. D.C. Code § 8-1808.

Montana regulates zoos and other exhibitions of animals but not traveling circuses. MT. Code § 87-4-801

Texas has laws governing standards for humane treatment of circus animals but specifically exempts USDA licensed circuses that provide proof of inspections at least once a year. Tex. Occ. Code §§2152.001, .052.

More and more states are requiring circuses to be licensed or obtain a permit: