Time of Exile, by editor Gaither Stewart, and published by The Greanville Post’s affiliated publishing house, Punto Press, has received unanimous rave reviews. The book’s prescient timeliness is one of its signal strengths. We are certainly gratified by the reception. Here’s the latest assessment by James P Miller.

PLEASE REMEMBER THAT WHEN YOU BUY ONE OF OUR BOOKS YOU ARE INDIRECTLY HELPING TO SUPPORT THE GREANVILLE POST AND ITS MISSION.

TIME OF EXILE: A Review 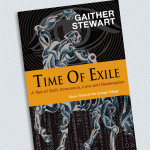 It is no surprise that Gaither Stewart’s long-awaited final volume of the Europe Trilogy, Time of Exile, is in my opinion his best book. His prose is carefully crafted to evoke a sense of loss and fear that only an expatriate, or more adequately an “exile”, can experience–something vividly real in Stewart’s own experience which hovers over the surface of the book. Stewart is the exile and chooses to defend his literary life with this volume.

His deep knowledge and exposure of recent and ongoing political crimes informs this book as the real setting regardless of where the immediate physical action takes place. Heinous crimes such as igniting the ongoing exodus to Europe of refugees from Syria and other countries and the absolute slash and burn politics of western imperialism across the globe. We are all actors in this debacle of loss for which Elmer Redway seeks solutions..

All good novels set before the protagonist a choice and obstacles to overcome before there can be any resolution. Choose the right thing (we hardly even have an idea what that means anymore) or join the herd of jackals and continue to bring humanity down to the Hobbesian level until it disappears. Sartre wrote about WWII and the post-war period as a continual series of choices which would define the future and ourselves.  Even if you choose to not choose there is no escape. The reluctance to choose, which gradually brought about the horrors of Nazi Germany and eventually the strife of the world today, is the ultimate choice.

Although Time of Exile is an action-packed story, moving across the face of a realistic and authentic Europe, it is a very moral novel. Several of the main characters are above all seeking pardon and forgiveness through penitence and self-sacrifice. In the touching Dostoevskian scene in the Belgrade cemetery, the two Italian bodyguards, Roberto and Gianluca, there to witness the funeral of the man they were trained to kill but did not carry out their mission, instead seek forgiveness for a crime they did not commit … but could have. Elmer and other characters of Time of Exile seem possessed by a desire to do the right thing..Doing the right thing–making a choice for the good even if it means your life–is the moral message of Time of Exile. Enter Edward Snowden alias Elmer Redway and his choices.

In much literature it is the same. The protagonist and antagonist consciously or unconsciously choose a path which leads either to further destruction or to a denouement which sustains some semblance of sanity but not necessarily redemption or satisfaction. The characters in Time of Exile collide in a very real struggle to escape the oppressive and murderous forces of NATO and the USA. The American Elmer and the Serbian Dragana, the German Karl Heinz, and the Bulgarian Antonia are then joined by the Italians Gianluca, Roberto, Serena and Nicola in the struggle to survive in a world where peace means war and truth means lie–where the state collects our own thoughts to use against us and uses fear to perpetuate war. They are on the run and must run fast. They will forever be exiles.

Stewart, drawing on his own exile and the choice to expose the lies, shows us, perhaps unintentionally, that some of us are now exiles in the country of our birth and where we reside.

In the entirety of this trilogy, I have traveled many times around the world and back. I am Elmer Redway and Nikitin in the first novel of the trilogy, The Trojan Spy.. I have been guided by Stewart and his trilogy and I am sorry Time of Exile is the last. But I have gained much from Stewart and his unforgettable cast of characters. Finally, Time of Exile is a modern day exposition of the threat to peace and truth by the forces of darkness such as NATO and the USA.

Although there is no grand epiphany for his characters, the author leaves the characters with some hope that maybe, just maybe, people are starting to recognize the truth and to act.

ABOUT THE AUTHOR
JP Miller is a journalist and writer. He has published political and social articles  in The Greanville Post, Cyrano's Journal, New Politics, and Pravda and short stories in PIF Magazine, The Southern Cross Review, and The Literary Yard among others. He resides in the Outer Banks of North Carolina beside the Atlantic ocean.