Russia Won’t Be Treaded On – That’s the Problem

“It’s clear to many people that these are prewar times. The enemy will have to tell it like it is: we don’t like Russia because it dares to put spokes in the wheels of our main goal, which is the total power of transnational corporations. Propaganda clichés about democracy are out-of-date…” 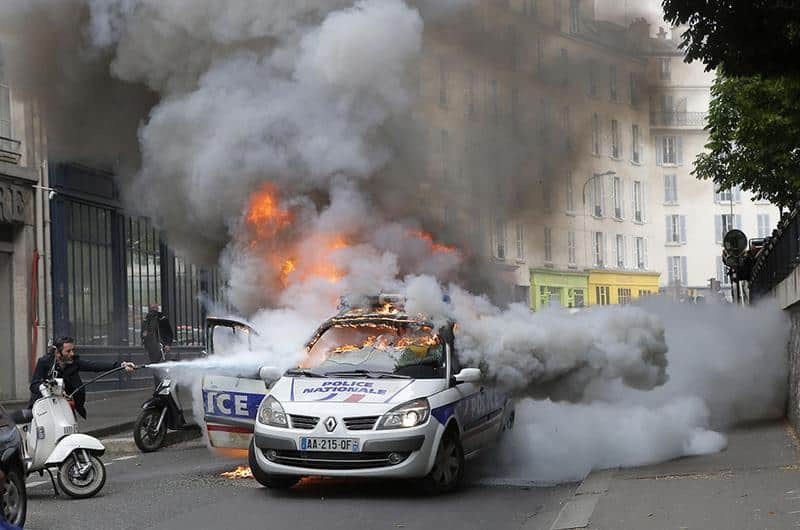 Paris protests. The French often show the road to follow.

Winston Churchill once said that generals are always preparing for the previous war. I would add: including the cold war. In fact, not only generals but politicians and political analysts do that, too. They are scaring the world over modern Russia, still seen as the USSR.
…
Many people, including me, looked back at Cuba with nostalgia when America deployed missile-defense system elements in Romania. The Cuban Missile Crisis also started with a deployment of missiles aimed at the USSR — in Turkey. Our symmetric response redrew the world map. The American President and the Secretary General of the Soviet Union decided as a result to install direct telephone communication between them to avoid a global catastrophe.
…
In the 1960’s, the world was divided into two hostile camps, with only a telephone wire keeping humanity from nuclear war. Today the West is trying to use the same methods against Russia that they used against the USSR fifty years ago. No wonder their efforts are unlikely to lead to desirable results: Russia and the world have changed beyond recognition.

Thanks to the Internet, information is different. European and American newspapers are criticized by commentators and bloggers on their own websites and are no longer the only source of information. The propaganda effect is being washed out — even disappearing. Political articles in the New York Times are reminiscent of front-page Pravda articles during the Khrushchev and Brezhnev period: readers can only infer trends and try to understand what to expect, ignoring proferred facts, which are likely to be false.

[dropcap]S[/dropcap]trange as it may seem, freedom of expression today benefits us but not the West. A thoughtful world reads with interest about Azerbaijan being allowed to supply gas to Europe, while Russia was not under the rules of the Third Energy Package. The world is beginning to wonder why Kosovo had the right to become independent of Serbia but Crimea isn’t allowed to separate from the Ukraine — or South Ossetia from Georgia. Europeans have begun to suspect that the secret talks on the Transatlantic Partnership are secret because they do not benefit Europe and the slogan about diversification is only a tool in the competitive fight.

People already knew about double standards, but now society often fails to side with its own government. Flash mobs can result in color revolutions not only in backward Arabic states whose population is gradually moving to the Old World, but in respectable Europe.

“It’s no use looking for the truth in Paris – which doesn’t decide anything. Nobody is responsible for anything: the world is in the hands of global victimizers, impossible to resist using civilized means…”

Whatever they say, Russia is no longer a monster behind an iron curtain. Our image changed, while Western propagandists still see themselves as cold war soldiers, but the opposite effect. I’m not talking about politicians and political analysts who say what they’re supposed to say, not what they really think, but about ordinary people, the driving force of future European Maidans.

Things have gone so far that they can’t be changed without revolutions. I fell a bit sorry for the French people who waste their energy protesting. It’s no use looking for the truth in Paris – which doesn’t decide anything. Nobody is responsible for anything: the world is in the hands of global victimizers, impossible to resist using civilized means.

To Europeans, Russia’s resistance to the new world order often looks like the desperation of a knight who stands alone on the battlefield against the enemy. To the surprise of the spectators, he begins to win because he is a skillful fighter who knows how to use a sword.

We haven’t seen such genuine compassion since the USSR. European elites – not those who have money, but those who can be called patriots and ‘opinion shapers’ — are looking with hope in our direction. We showed we could fight for sovereignty and values which I dare call either universal, human, or European, and which are substitutes for real values — French, German, Finnish, Austrian and so on.

The main mistake of global players is trying to resist using dusty old patterns, accusing us either of nonexistent sins or of things they are guilty of themselves. As a result, the number of Russian allies among their populations is slowly growing.

It’s clear to many people that these are prewar times. The enemy will have to tell it like it is: we don’t like Russia because it dares to put spokes in the wheels of our main goal, which is the total power of transnational corporations. Propaganda clichés about democracy are out-of-date.

Our problem is that we are the only ones able to resist them and we won’t have allies, only sympathizers. There will not be a global war because the movers and shakers want to live, not to sacrifice themselves for their companies. They will try to exhaust us with local conflicts in border-states, which we will be trying to avoid.

I wish we would remain standing for at least twenty years, until Europeans grew into a revolt. Against their corrupt presidents, against a powerless EU that was imposed on them instead of sovereignty, against the real landlords of the continent. Perhaps everything will be all right in the end.

The author is a regular commentator with LiveJournal.com