I’ve been lulling myself to sleep lately with this Sufiism:

Before you speak, let your words pass through three gates.

At the second, ask, ‘Is it necessary?’

Think I’ll tinker with Sufi’s wisdom though, just this once. After all, I’m writing, not speaking. Can I slide my words only through the first two gates and slip around the third? Yes—to unleash unkindness towards Meryl Streep. 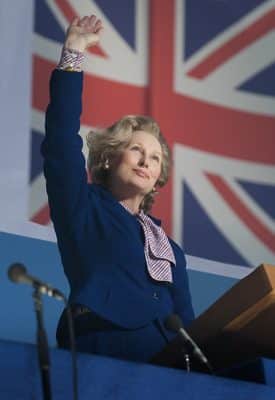 Streep in the Iron Lady, a Margaret Thatcher biopic, essentially an impersonation job.

First, I didn’t watch the Golden Globes. I was computing and Streep’s performance, while accepting her Lifetime Achievement award, was saturating cyber. Several sites contained links to her entire sermon. Essentially, the actor was voting again, slickly (without using names) recasting for Hillary Clinton as she took a swing at president-elect Donald Trump. The actor said, “When the powerful use their position to bully others, we all lose.” Then she called on the press to “hold power to account, to call him on the carpet for every outrage.” What breathtaking hypocrisy and blind eyes and deaf ears for eight years during Obama’s drone campaign, his bombing seven countries, the dead, the wounded, a refugee crisis, a regime-change foreign policy as well as domestic disorder, the ever-widening gap between the uber-filthy wealthy and the poor, police militarization, that Black parents have to have “the talk” with their children about interactions with police. No outrage about any of this, Streep?

I’m reminded of Streep’s admiration for the neoliberal, union destroying, warmongering Margaret Thatcher whom she portrayed. Interviewed about the Thatcher film, Streep said, “I was aware of her very early on and, even though her policies were not popular, to say the least, in my circles, people were kind of thrilled that a woman had become leader.” Whoa. “Thrilled that a woman had become leader”, regardless of the particular woman’s ruthlessness.

Insert: Soon a climate change denier who spends idle time entering brat-like, I-know-you-are-but-what-am-I(?) Tweets will take the oath of office, but then his rise to power makes sense—Trump as slouching beast. I truly don’t know what’s worse, someone who denies the science of global warming or someone who believes the science, expresses concern, does next to nothing to nurture our ecosystem, and bolsters the fossil fuel industry. Someone who says “ban Muslims from entering the country” or someone who blows up Muslim countries, someone who says he’ll build a border wall or someone who installs chain-length fencing and vehicle barriers.

Back to Streep whose solipsism deems her worthy of, well, the assignation of an alternate meaning to her name. The streep neologism. Like the santorum. Definition of the streep: a faux-feminist, a faux-liberal, a vagina voter, someone who’d knit/wear a pink pussyhat for an anti-Trump march and consider this revolutionary action.

A Day of Service is a Disservice to the Truth of MLK’s Life, Death, and Witness

The issue is not Trump. It is us.

I have often said that the mark of a true actor is for the audience not to be aware that they are watching an actor acting. My experience of Meryl Streep is that l am ALWAYS conscious of the fact that l am watching an actor working. I.e. I don’t buy her representation of the part. I felt the same way about Julie Christie. I have some experience of the theatre, and have given a great deal of thought to acting, and l can say that I have never found her convincing. I’m not sure if that is what Trump… Read more »