HELP ENLIGHTEN YOUR FELLOWS. BE SURE TO PASS THIS ON. SURVIVAL DEPENDS ON IT.
By Ziad Fadel , Editor in Chief, SyrianPerspective.com
opEds 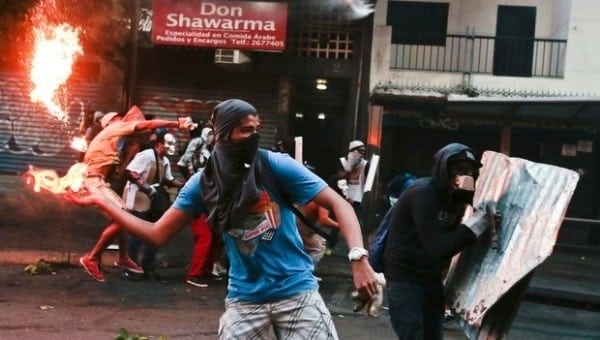 Look familiar?  The only difference is that this terrorist is in Caracas, Venezuela, while the other rodents started out in Der’ah, Syria.  All provoked by the U.S. with the same motive.

Don’t you just love the platitudes as they cloyingly envelop your senses with syrupy refrains about “the people”, “democracy”, “liberation”, “fairness”, “transparency” and the rest of the gobbledegook spewing out of the maws of professional hypocrites and liars?  Gee, I thought the Americans would finally realize that their little frolic in Syria was a miserable failure.  Even Britain, the world’s most renowned politically scoundrel-laden nation, should have noted by now that its own policies in Syria came a cropper.  So, if the technique flopped in Syria, why would it succeed in Venezuela?

And wasn’t American Vice President, Mike Pence, now enlivened by the election of fellow Evangelical, the Brazilian buffoon, Jair Bolsonaro, just pitifully inarticulate as he drummed up what support he could for the “revolt” in Caracas?  As it turned out, he didn’t drum up very much of anything for his mini-coup in Venezuela.  The Mexican government stood on principle and refused to denounce President Maduro.  Even the EU did not take a clear position asking only for another election which would please Washington.  Russia and China, even Turkey, elected to support the only legitimate government of Venezuela which has an ambassador at the U.N.

I am going to give some advice to Mr. Maduro:  Arrest Juan Guaido for seditiion and treason.  He will be found guilty because his wrongdoing is filmed in the light of day.  He must then be executed, cremated and his ashes strewn on the surface of the Orinoco River.  These are the wages of treason and collaboration with a foreign government.  I do not recommend having him assassinated only because I think such things are wrong inherently, and might create an aura of martyrdom/saintliness about the wretched backstabber.  No, let the legal institutions take care of Mr. Guaido.

The parallels between the effort to oust Dr. Assad in Syria and what is transpiring in Venezuela are stunning.  Once again we have the media in the West uniformly denouncing the “autocratic” president of the nation.  There are outright allegations of election fraud; Supreme Court corruption; dazzling analyses of economic ruin by know-nothings who never bothered to factor in American connivance in the destruction of the Venezuelan infrastructure.  Soon you’ll be reading and hearing words like “besieged”, “embattled”, “hated” with reference to Mr. Maduro; while you will get to hear buzzwords like “freedom fighters”, “rebels” and more folderol to cover up the fact that most of the opposition is just a gaggle of terrorists doing America’s bidding.

Maduro must speak to Dr. Assad who will enlighten him from his own experiences in Damascus.  Maduro must listen carefully to what advice Dr. Assad will give him.  In the meantime, he must strengthen his ties to Russia, Iran, Turkey and China.  Brazil is no longer a player with this “end-of-days” Zionist cuspidor ruling the country.  He must embolden his military commanders and maintain a strict order of ideological conformity to prevent any defections by traitors in critical security posts.  While Venezuela is not a “mosaic” nation like Syria, where you have multiplicities of religions and ethnic groups vying for survival or dominance, Venezuela is uniformly Catholic but riven by classical Marxian economic class rivalries which can substitute theoretically for the mess created in Syria by a large minority of anti-minoritarian bigots, i.e. Sunni refuseniks.

But, once again, the parallels are alarming.  Substitute Colombia, Peru and Brazil for Saudi Arabia, Qatar and the UAE.  The U.S. is still itself scampering alongside its favorite poodle, the U.K.  Even France has now thrown in its patented uselessness while Macron is bedeviled by his own opponents,  the “Yellow Vests”.  The Western World has been chastened by the experience of Syria.  I can’t believe they are up to it again.

Nicolas Maduro, in full presidential regalia, flashing a Nixon to us. He has not been the greatest leader of Venezuela. That honor goes to his predecessor, Hugo Chavez. But, he needs to do something radical to change the course of his country’s descent into anarchy.

[dropcap]T[/dropcap]he army has today declared its loyalty to the government and constitution.  But, be careful here.  That’s the army that’s known.  There may be elements which have been compromised by the CIA, a la Saddam Hussein.  Or maybe, we can think of Syria which was at first haunted by the short-lived defections of officers like Hussayn Harmoush and ‘Abdul-Jabbaar Al-‘Ukaydi.  The U.S. would have waited until it had its ducks all in a row before inciting this violence.  It failed in Syria, to be sure, but, the neocons may be trying to redeem themselves in this hemisphere.

Folks, I am very familiar with Venezuela.  My uncle from Palestine married a Venezolana about 50 years ago when he and she were students at Florida State University.  My uncle, a red-haired Arab with a million freckles, known as Fred or El-Tigre, (he was a champion tennis player in Caracas at the Altamira Tennis Club) married Aunt Yolanda who got a Ph.D. in Sociology and worked for the government in Caracas at Silencio.  I visited them over 5 times and got a good idea about how the country was heading.

As many of you know, Caracas is a typical South American capital. It is separated from the ocean by a wall of mountains which host its major airport at Macatia on the Caribbean side.  It is surrounded by mountains, the highest being Avila to which you can travel by the fabulous Teleferico.  But as you ascend to the summit of the mountain, you notice that the gap between rich and poor is wide and stark.  The rancheros live on the sides of the mountains in abject poverty while the wealthy are packed inside the city or the plush, guarded foothills of the mountains.  This disparity is what brought Hugo Chavez to power.  It’s a classic study in class warfare befitting a nation now led by Marxists.

If Maduro wants to protect his country and stay in power, he must do this:

THE REVOLUTION HAS MANY SUPPORTERS, BUT IT NEEDS SUPERIOR LEADERSHIP.
A pro-Maduro demonstration

ZIAD FADEL—is editor in chief of this blog, and attorney for 35 years and Supreme Court Certified Interpreter for Arabic/English.

What’s Been Learned Won’t Be Easily Forgotten: A Conversation with Antonio Gonzalez Plessmann