HELP ENLIGHTEN YOUR FELLOWS. BE SURE TO PASS THIS ON. SURVIVAL DEPENDS ON IT.
A DISPATCH FROM RT.COM

Some Americans may be surprised to hear that when it comes to pushing the global imperialist filth, the British ruling cliques are often more virulent than their US allies 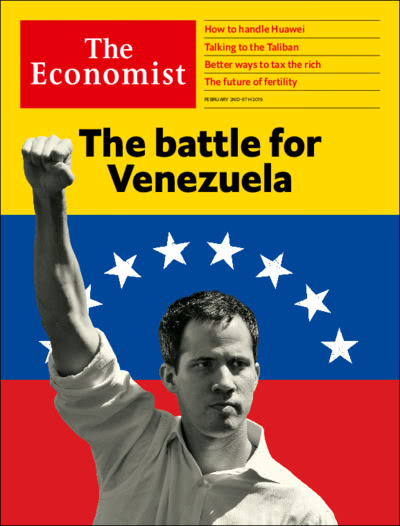 [dropcap]T[/dropcap]he prominent UK-based magazine Economist decided to endorse regime change in Venezuela by replacing its Facebook profile picture to its cover of self-proclaimed president Juan Guaido. Readers were not amused.

“The world’s democracies are right to seek change in Venezuela. The question is how,”declared the London-based magazine that regularly advocates for open borders, globalization and neoliberal capitalism.

The cover shows Guaido in shirtsleeves, with a fist raised up in a gesture that US-backed regime-change operatives in various countries have been using as a logo for decades.

Though many readers supported the endorsement, others were less amused, leading to a hilarious comment thread in which someone declared himself the legitimate editor of the Economist – mimicking the way Guaido asserted his leadership in Caracas.

“This is in defense of an illegitimate coup. So in response, I've decided that I'm going to declare myself editor of The Economist. Who's with me?” wrote Jay Gannon.

When someone countered that Guaido was recognized by “democracies,” they were shouted down: “YOU WILL SHOW RESPECT TO THE NEW EDITOR OF THE ECONOMIST OR YOU WILL DISAPPEAR WITH THE SUPPORT OF OUR FRIENDS AT THE CIA,” another commenter said, presumably in jest.

“The US should sanction the current editor until The Economist recognizes Jay Gannon as the rightful editor,” quipped another, again referring to the way Washington has sought to force Guaido’s presidency.

Other comments were less playful, accusing the magazine of abandoning journalistic integrity (“Wow, subtle!”) and engaging in hypocrisy (“Now do the same for Saudi Arabia”).

One comment in particular argued that “Lenin continues to be correct about this magazine,” referring to the Bolshevik revolution’s leader, who once described the Economist as “a journal which speaks for British millionaires.”

The Economist has been around since 1843, giving it plenty of time for indulging in esoteric takes and being wrong on a wide variety of subjects.

Changing a profile picture as a political statement is a time-honored tradition online, especially to express support for victims of violence or persecution. Thousands put the words “Je suis Charlie” (I am Charlie) on their accounts after the 2015 massacre at Charlie Hebdo satirical magazine in France, for example. The tactics was soon adopted for public pressure campaigns – for example, to demand release of people thought unjustly imprisoned. Now it appears to be the newest tool for toppling unwanted governments.

The US aggression against Venezuela as a diagnostic tool

Of music, animals and innocence.